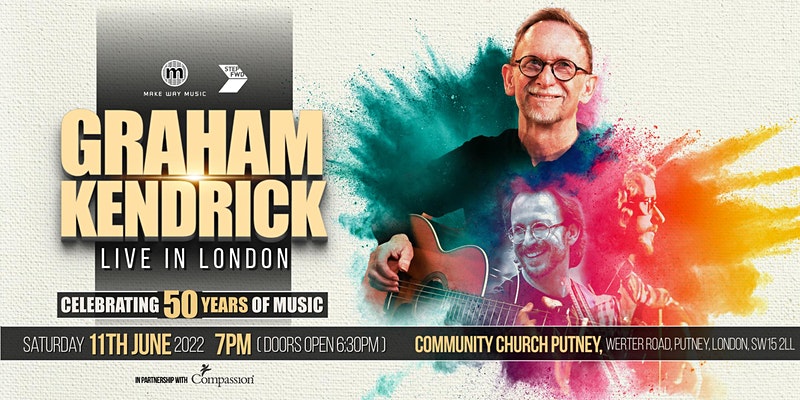 Legendary worship leader and songwriter Graham Kendrick is going back to where it all began to celebrate 50 years in the ministry and you can be there too.

A Step FWD, one of the organisers of Graham Kendrick Live in London, is offering you the chance to enter a competition to win a ticket to the show at Community Church, Putney on Saturday 11th June. The church is where Graham, who is regarded as the ‘father of modern worship music’ took his first steps in Christian music ministry over five decades ago.

Fresh from singing in front of thousands at Big Church Day Out this past weekend and at the 50th Prom Praise at the Royal Albert Hall last month, Graham Kendrick Live in London promises to be a more intimate affair.

The composer will be delving into his extensive back catalogue at the event, as well as airing some new songs from his most recent EP “Where it Began”. Since those fledgling forays into music half a century ago, Kendrick has written and recorded hundreds of songs which are well known around the world, such as ‘Shine Jesus Shine’, ‘Knowing You’, ‘The Servant King’, ‘Meekness and Majesty’ and ‘Amazing Love’.

His music is familiar to millions. Many of the songs from his 40 albums have been sung in churches and schools globally, helping people to express their hearts in worship. Graham’s music has also influenced generations of artists and songwriters to follow in his footsteps including the likes of Martin Smith and Noel Robinson to name a few.

Early Bird tickets for the event have already sold out and people are being urged to book their tickets now to avoid disappointment. “This truly is a special event you don’t want to miss, so I would book tickets as soon as possible,” says Event Manager and A Step FWD founder, O’Neil Dennis. “It’s a chance to get up close and personal to a true living legend and experience intimate performances of his incredible back catalogue.”

In December, Graham was honoured with a Lifetime Achievement Award at the inaugural Step FWD Awards – the UK’s definitive Christian & Gospel music awards.

The partnership for Graham 50th anniversary marker was birthed when O’Neil Dennis personally delivered the replacement award to Graham at his home early in the New Year.

“It is an absolute honour and privilege to be involved in this event to celebrate Graham,” says Dennis. “He is somebody who 50 years later is still active, is so real and down to earth, yet is still inspiring the next generation of worship leaders. He has a heart to share the Gospel and for humanity and he is great to be around and has so much wisdom, I just had to get involved. You do not want to miss this.”

To mark this momentous occasion a free ticket will be given away via 10 media partner websites. To enter the competition, simply comment on this article and related social media posts with your favourite Graham Kendrick song. The winner will be picked at random from the responses and announced on A Step FWD’s Instagram Live on Thursday 9th June.

Tickets available at: grahamkendrick50.eventbrite.com so book yours today!