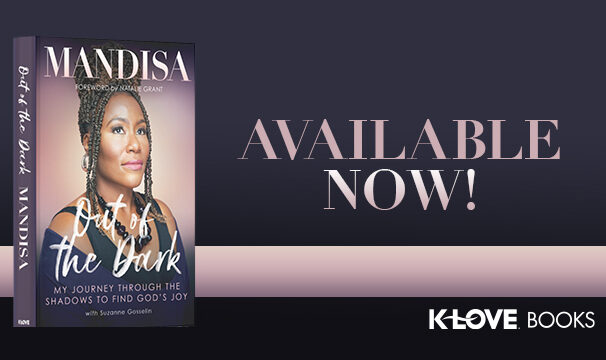 GRAMMY®, Dove Award and two-time K-LOVE Fan Award winner Mandisa’s brand new book, Out of the Dark: My Journey Through The Shadows To Find God’s Joy is available everywhere, today.  Tomorrow, March 16, Mandisa will discuss the personal memoir for the first time on television on “Good Morning America,” followed by an appearance on GMA3 in the afternoon. With more press hitting this week and beyond, PEOPLE.com has run an exclusive excerpt from the book, and Homelife magazine features Mandisa on their April cover.

Reviews have started pouring in as well, with many calling it “beautfiul,” “encouraging,” “insightful” and “raw,” and “vulnerable.” Borrowing the title of her fifth studio album, which features hits “Unfinished” and “Bleed The Same,” Out of the Dark dives deep into the singer’s battle with depression and anxiety. After losing a close friend to cancer—a friend for whom she wrote her GRAMMY® award-winning song, “Overcomer”—Mandisa descended into a dark pit of depression, isolating herself from family and friends, and turning to her familiar friend, food, for comfort.

With the same warmth and vulnerability she exudes in her songs, in Out of the Dark, Mandisa opens up about her mental health struggles, walking through grief, and the role shame has played in her narrative. Through her personal experiences, she hopes her redemption story can provide a piece of redemptive healing in someone else’s story.  The fresh title follows her first book, Idoleyes: My New Perspective on Faith, Fat & Fame, written shortly after her time on “American Idol” and focusing on her battle with weight, food addiction and body image.

This Friday, March 18, Mandisa will debut a new single, “Out of the Dark (Petey Martin Remix),” the first track from the forthcoming Overcomer: The Remixes EP, scheduled to release April 29.

Four new remixes will be featured on the EP, including “Out of the Dark”, “Overcomer”, “Comeback Kid”, and “Bleed The Same.”