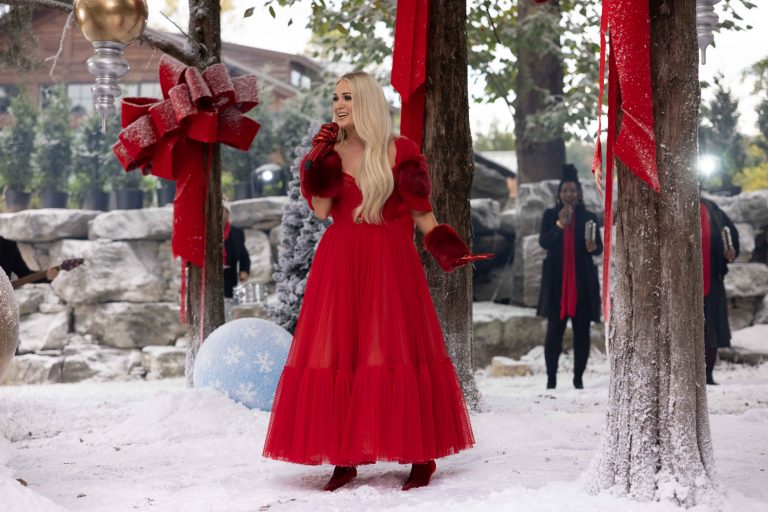 On the eve of the debut of her first residency, REFLECTION: The Las Vegas Residency, seven-time GRAMMY® Award winner Carrie Underwood ushers in the holidays with multiple broadcast appearances on behalf of My Gift (Special Edition).  The album, featuring three new tracks, was released September 24, debuting #1 on Billboard’s Holiday Albums chart. Carrie’s first Christmas album, My Gift, was initially released September 2020, and has been certified Gold by the Recording Industry Association of America® (RIAA).  To date, there have been over 297 million global streams for My Gift and My Gift (Special Edition) combined.

She kicked off the season with two stellar performances with Jason Aldean of the duo’s #1 smash hit duet, “If I Didn’t Love You,” on the 55th CMA Awards and the 2021 American Music Awards, both of which aired on ABC in November.  Additionally, she won her 16th and 17th AMAs, marking her 8th win for Favorite Female Country Artist and her first for Favorite Inspirational Artist, elevating her to tie Garth Brooks and Justin Bieber as the sixth top AMA winners of all time.

Carrie received another early Christmas surprise, with two GRAMMY® Award nominations – her album of beloved gospel hymns, My Savior has been nominated for Best Roots Gospel Album and she and Aldean are nominated for Best Country Duo/Group Performance for “If I Didn’t Love You.”

Carrie continues to grace the holiday airwaves with special performances on NBC’s 2021 “Macy’s Thanksgiving Day Parade” on November 25, ABC’s “CMA Country Christmas” on November 29 and “Christmas in Rockefeller Center,” airing December 1 on NBC.  She will also be seen on Canada’s “2021 Santa Claus Parade,” airing December 4 on CTV and repeating through December on Bell Media Platforms (Crave, CP24 and CTV.ca).  HBO Max is currently streaming “My Gift: A Christmas Special From Carrie Underwood,” which premiered in December 2020, becoming an instant holiday classic.  Several additional holiday broadcast appearances will be announced shortly.

Produced and arranged by Greg Wells, My Gift is a combination of beloved traditional songs celebrating the spiritual nature of Christmas and several originals, including her collaboration with John Legend, “Hallelujah.”  My Gift (Special Edition) features three additional tracks: “Favorite Time Of Year” and “All Is Well,” both produced by Greg Wells, and “Let There Be Peace/Something In The Water (LIVE From HBO Max’s MY GIFT: A Christmas Special From Carrie Underwood).”

My Gift (Special Edition) is now available digitally, on CD and vinyl here.

Carrie also delighted fans with a “Christmas Bonus” – a comedic digital-only holiday track, “Stretchy Pants,” released November 12.  The track is available here and is accompanied by a fun-filled animated video at stretchypantssong.com, created especially for the song, with a portion of the proceeds from streaming and downloads donated to The Store, the Nashville-based organization which was co-founded by Brad Paisley and Kimberly Williams-Paisley.  Limited edition holiday “Stretchy Pants” are available at the Official Carrie Underwood Online Store.