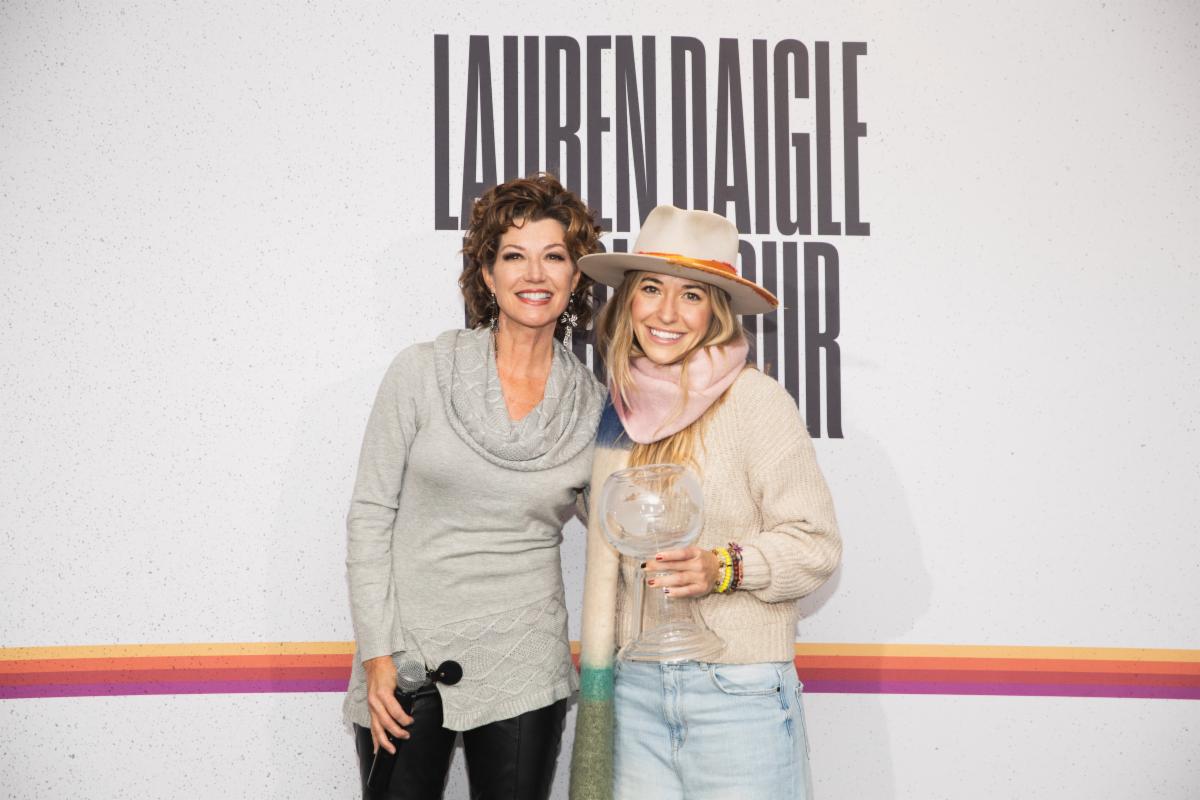 This past weekend, at a backstage gathering prior to a sold-out performance at Bridgestone Arena, two-time GRAMMY Award winner Lauren Daigle was recognized for the impact that both her music and philanthropy has had on millions of people worldwide.  The Global Impact Honor, presented by the iconic singer/songwriter and musician Amy Grant, distinguished Daigle as a genre trailblazer and ambassador – a role that she’s embraced over the course of her almost decade long, record-breaking career.

When presenting the honor, Grant said “I’m so thrilled to be here tonight, and so proud of you. You have literally impacted millions of people around the world. This is the last night of the tour that has taken 20 months to wrap up and during that time you’ve shared your faith and you’ve done it tirelessly. So for using your platform to share your faith in such an open way and welcoming millions of people around the world, for the work you’ve done having children sponsored, and just using your gifts in such an amazing way I’m proud to give you this honor.”

Daigle’s impact on the genre is undeniable. Worldwide, she has sold over one million concert tickets on three continents, including 170 sold out headline performances, and has donated over $2,000,000 to 25+ organizations from those sales alone. Her music has been streamed over 5,000,000,000 times and she has over 15,000,000 social media followers. She has performed on nearly every network morning, daytime, and late-night show, as well as multiple awards shows, and competition shows including The Voice, American Idol, and America’s Got Talent – a feat no other artist in the genre has accomplished since Amy Grant’s breakthrough in the 90s.

From 100 weeks at No. 1 with her GRAMMY Award winning album, Look Up Child, to 132 weeks at No. 1 with her 4x Platinum selling single “You Say,” her music continues to connect with audiences from all walks of life. Daigle recently earned RIAA certifications for several songs from her first Platinum selling record, How Can It Be. The album’s title track and “First” have been certified Platinum, “Trust In You” is recognized as 2x Platinum, and “Come Alive (Dry Bones),” and “O’Lord” have been certified Gold & Platinum.  Her latest single “Hold On To Me” marks her 5th Billboard No. 1 and extends her record of most No. 1s among women in the genre. Daigle has earned seven Billboard Music Awards, four American Music Awards, ten GMA Dove Music Awards, two Guinness World Records, and sold-out concert venues all over the world including in including Australia, Germany, England, France, Canada, The United States.