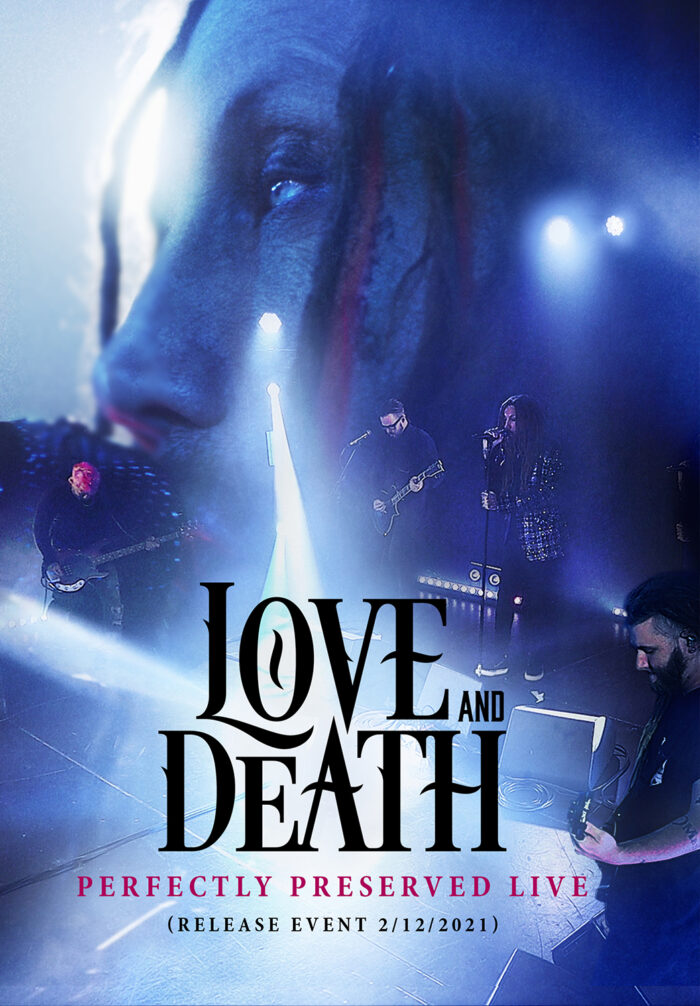 Love & Death is preparing to release Perfectly Preserved Live, an explosive live album and video recording of their first concert in 8 years. The DVD and Blu-ray will be available for purchase at major retailers such as Walmart, Barnes & Noble and Amazon on Tuesday, November 16, with the audio recording hitting streaming services on Friday, November 19. You can access it on your platform of choice at https://vydia.lnk.to/PerfectlyPreservedLive.

“For myself and all of the musicians and crew involved, this concert experience was a bright light in the middle of such a dark and divided world. What a gift to capture this show during a moment in time that the entire planet will never forget,” Brian “Head” Welch shared as he reflected on his band’s event. “Big shout out to the entire Love & Death team for making this concert DVD and stream available for all our fans. One of the few positive experiences to come out after 2020!”

It’s a sentiment that guitarist Jasen Rauch echoes: “Having the opportunity to play during the pandemic and connect with fans, even if only in a remote way, was not only an amazing experience, but incredibly exciting and needed!”

The exceptional caliber of Love & Death’s musiciancianship is carried over into the live performance that is immortalized on Perfectly Preserved Live. The collaborative approach was taken to the next level with multiple guest appearances on stage, including a feature from Memphis May Fire’s Matty Mullins on the song “White Flag.”

“It was an absolute honor to perform ‘White Flag’ with Love & Death on their livestream,” Matty Mullins said. “Korn has certainly influenced me, but getting to know Brian on a personal level and seeing his heart in action has inspired me on a whole new level. The new Love & Death record rips, and I’m so stoked for people to check out this live DVD!”

Other special appearances include Keith Wallen (Breaking Benjamin), who reprised his collaborations from the studio recording, and Lacey Sturm, who carried her part of passionate suicide prevention track “Let Me Love You.” The result is an unforgettable concert that captures not only the spirit of the raw and emotive album, but the heart of the rock community as a whole.

In addition to playing Perfectly Preserved highlights like “Down,” “Let Me Love You” and “The Hunter,” longtime Love & Death fans will be glad to see that older tracks like “Meltdown,” “By the Way,” and the Love & Death spin on Devo’s “Whip It” all made the setlist as well. Taken as a whole, the performance is a true testament to the musical quality and deep emotional connection that the band has created.

“We hope everyone loves the DVD and cherishes the memory as much as we will for many years to come,” Head concluded.