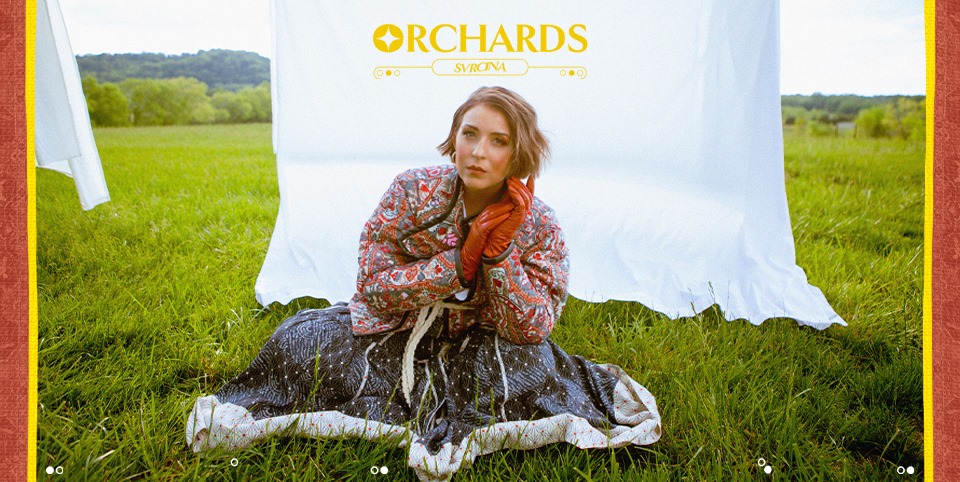 Orchards from SVRCINA explores personal growth, recognizing and breaking unhealthy patterns, and cultivating healthy relationships using a unique blend of pop and European influences. If you are looking for an album that will make you dance, cry, and anything in-between, this is the album for you. With a Julia Michaels buttery voice, you will not be disappointed!

SVRCINA has a top 3 Billboard Hot CHR single under her belt and over 90 million streams on Spotify alone. She also has many cuts with artists such as Hulvey & Lecrae, Icona Pop, Robin Schulz (and another song on hold with Robin & Felix Jaehn), Tommee Profitt, UNSECRET, and others! SVRCINA was also just nominated for Rap/Hip Hop Recorded Song of the Year – “Reasons” Hulvey ft. Lecrae, SVRCINA at the Dove Awards!

The preparation and planning that went into this album is like no other. From mood boards to merchandise collaborations, her creativity will blow your mind. SVRCINA announced her sophomore album on the first day of fall, September 22, by releasing candles with Jackpot Candles. She gave her fans the opportunity to receive a free vinyl of her upcoming album if they bought the bundle of 5. With the idea in mind of wanting to create an album surrounding “Cottage Core” you are bound to feel safe and cozy while listening.

With the album dropping on Friday, SVRCINA exclusively premiered her new music video, “Cycles”, with Flaunt Magazine, today! The American satirical fashion and culture magazine quoted: “If you’re not familiar with SVRCINA, prepare to fall in love. Formally based in Nashville, the singer-songwriter continues to give fans nothing short of high quality music, with lyrics painting her own vivid imagery inspired by real-life experiences.” Read the article here!