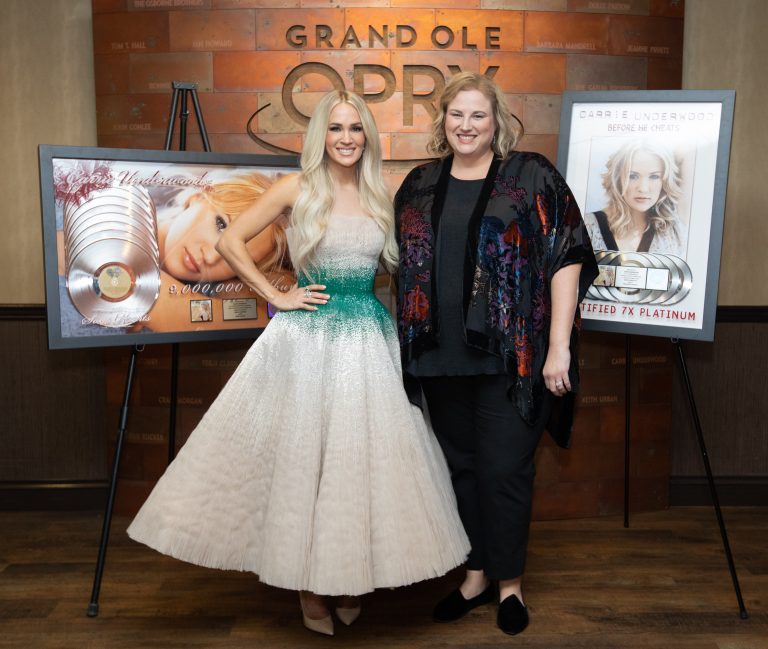 She was surprised with plaques to commemorate the certifications by Jackie Jones, RIAA Vice President, Artist & Industry Relations at her October 23 performance at the Grand Ole Opry.

Carrie has sold more than 66 million records worldwide, recorded 28 #1 singles (14 of which she co-wrote), and has seven albums that are certified Platinum or Multi-Platinum by the RIAA. In just over 15 years, she has already skyrocketed to the top of Gold and Platinum history with over 70 million certifications. Additionally:

Most recently, five singles from Cry Pretty have been certified by the RIAA, including the Platinum-certified singles “The Champion featuring Ludacris” and “Southbound” and the Gold-certified “Cry Pretty,” “Love Wins,” and “Drinking Alone.” All nine of her consecutive album releases (two of which she co-produced) from the beginning of her career debuted #1 on the Billboard Country Chart, making her the only artist to accomplish that feat.

Carrie’s ninth album, My Savior, was released in March, featuring the beloved gospel hymns she grew up singing in church, which she co-produced with a multi-platinum selling, four-time GRAMMY® Award-winning record producer and songwriter David Garcia.  Her Christmas album, My Gift (Special Edition), was released September 24, featuring three additional tracks, and debuted at #1 on Billboard’s first Top Holiday Albums chart of this holiday season.  HBO Max is currently streaming “My Gift: A Christmas Special From Carrie Underwood,” which premiered in December 2020, a musical holiday special, with Carrie performing songs from My Gift with a full orchestra and choir, becoming an instant holiday classic.  Her hit duet with Jason Aldean, “If I Didn’t Love You,” is currently #1 at Country Radio and she recently collaborated for the first time with Dan + Shay on “Only Us” from the Dear Evan Hansen (Original Motion Picture Soundtrack).