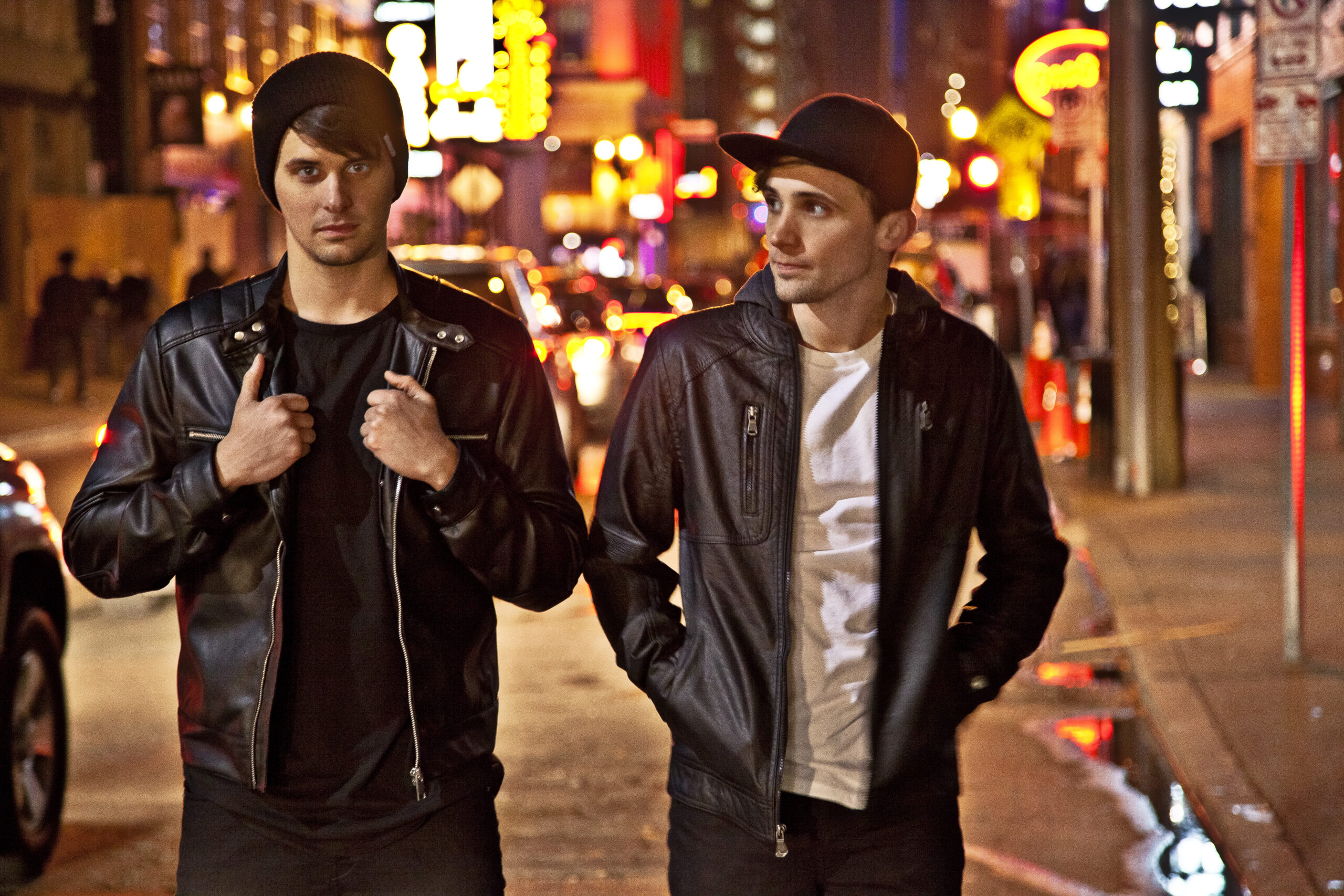 All Roads Lead to Hope: A Chat with Winona Avenue

Winona Avenue released their long-awaited self-titled debut album back in June. The music on the album combines the styles of alternative rock and synth pop, drawing inspiration from 1980s power pop, 2000s pop punk, and 2010s pop rock. The album’s sound is characterized by electric guitars and synthesizers, with the lyrics revolving around themes of positivity, reflection, and encouragement.

We recently had the chance to connect with Daniel & David from the band to chat about the new album, their band’s mascot (more bands should have mascots!) and what their personal theme songs would be (you can really feel the brotherly love through their answers!)

-What’s the story behind your band’s name?

DANIEL: We spent a lot of time brainstorming band names that we liked and that had a connection to who we are. Growing up, we lived on a road called Winona Drive, and we thought it would be a good band name. Winona Drive was our first choice, but when we checked to see if the name was already taken, we realized there was a music studio using the name. So we decided on Winona Avenue instead. And looking back, I think I prefer Winona Avenue, so it all worked out.

-What was the most memorable part of recording your debut album?

DANIEL: My favorite and most memorable part of the recording process was hearing each song come to life. It was always a good feeling when we finished writing a new section of a song or when we tracked a new instrument. Even the minor details that some people may not notice on the album were exciting for me to work through, such as choosing the guitar tones or the sampled instruments.

-What’s your favorite song on the album and why?

DAVID: This is always a tough question for me to answer. I have several that are all pretty close. But if I have to choose one, then I’ll go with “December Night.” I like the melodies and I think it’s a strong track instrumentally.

DANIEL: I’ll go with “Masterpiece.” I like the song musically, and I enjoy having the opportunity to talk about the message behind the song. It’s a reminder and a belief that all people are made a masterpiece and for a purpose, and I think it’s a message that needs to be heard.

-What was the inspiration behind the concept for the album lyric booklet, with the pictures going from darkness to sunshine?

DANIEL: The concept was actually the idea of the art designer for the album, Nick DePalo. He listened to the full album, talked with us about our vision, and sent us a few different options. Most of the pages in the lyric booklet consist of a road or path, which we thought was a good fit since the album is self-titled as Winona Avenue. The darkness to sunshine concept is reminiscent of the lyrics on the album. There is a recurring message of hope and positivity. The darkness to lightness is a reminder that there is light at the end of the road and that there is always hope, no matter the circumstances.

-What message do you hope listeners take away from the album?

DAVID: We hope the album can be used to inspire others to make a positive difference in the world and in other people’s lives. We’d also like for the album to give people a sense of love and hope. There is a God who loves us, that is with us, and that can make great things out of terrible situations. When writing our album, we wanted that message to be reflected within the lyrics.

-What is your favorite part of being in a band?

DAVID: My favorite part of being in a band is touring. A lot of cool things happen while we are out on the road and playing shows. I enjoy sharing our music for new fans and seeing old fans sing along. But I also love meeting so many incredible people while we travel.

DANIEL: There are a lot of things I like about being in a band. I like the creative processes such as writing, recording, filming videos, and creating art. I also enjoy travelling, meeting new people, and performing our music live. But my favorite part about being in a band is sharing love, hope, and faith with others, both on and off the stage, as well as in the music that we write.

-What is the most challenging part of being in a band?

DANIEL: Being in an independent band can be challenging. There is a lot of work that goes into it behind the scenes. I actually think people would be surprised at the amount of work involved. But the challenging days are worth it because we’re doing what we love and what we feel called to do.

-Who are some influences that helped shape your musical sound?

DANIEL: Some of my musical influences over the years include artists such as All Time Low, Coldplay, Yellowcard, and Paramore. I think you can hear some of those influences on our debut album.

DAVID: As a drummer, I’ve always been a fan of the way Travis Barker plays the drums. I love the unique beats he creates, the fills he uses, and the energy he has behind the drum kit. I try to bring a similar energy every time I perform.

-Who are some artists you listen to that help strengthen your faith?

DANIEL: A few artists for me would be Relient K, Skillet, and Switchfoot. They all write lyrics that I think are inspiring, thoughtful, and rooted in Christ. When I was in middle school, I had a friend that invited me to go to a festival called Ichthus with his youth group, and all three of those bands were performing. At the time, I was just excited to get a couple of days off school, to go camping at the festival with my friends, and to see some of my favorite bands. I have always believed in God, but during that music festival, I understood what it meant to have a relationship with God. I still listen to many of those artists today.

-Are there any particular Bible verses that are especially meaningful to you?

DAVID: I think Mark 12:30-31 reflects our mission as a band. It serves as a reminder for us to stay focused on God and share His love with others through our lyrics and our actions.

-Let’s end with a couple fun questions. What’s the story behind Marvin (the band’s mascot)?

DANIEL: When we went out on our first tour in the fall of 2019, our mom gave us this little toy panda. We named him Marvin and put him in the van. One day, when we were setting up for a show in Pennsylvania, we started throwing Marvin around in a field like a football. We learned that the grass stuck to him, so it became a running joke to see how dirty he could get before the tour ended. Now he stays on the dashboard in our van. We’ve been afraid the sun might get him stuck to our dashboard, but that’s a risk we’re willing to take.

-If you could have a personal theme song that played every time you walked into a room, what would it be and why?

DANIEL: I would choose the song “Happy Birthday,” so everyone would always think it was my birthday and give me presents.

DAVID: Mine would be “In the Arms of an Angel” by Sarah McLachlan, so that Daniel would never have a happy birthday.