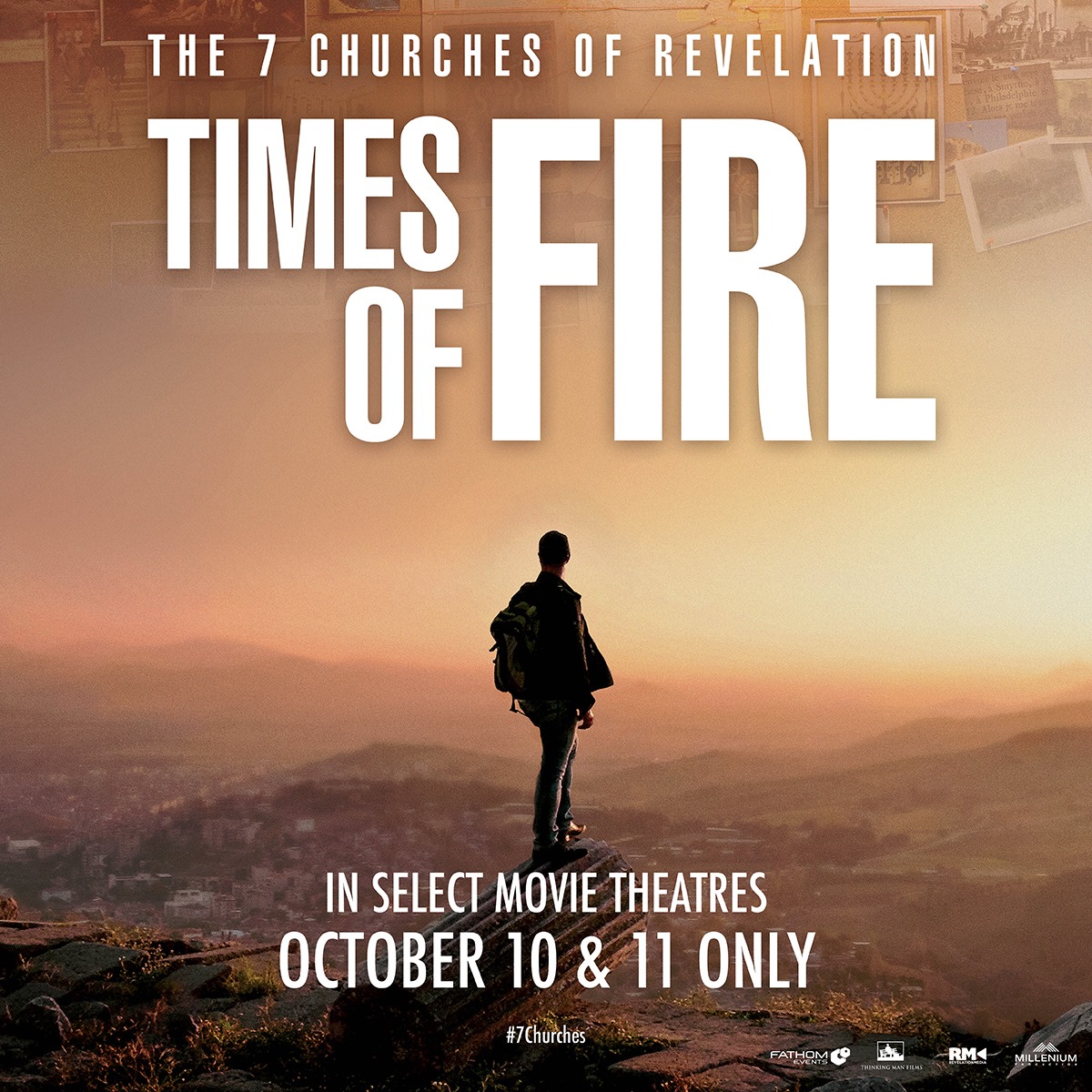 The 7 Churches of Revelation: Times of Fire In Theaters for a Special Two Night Only Engagement

Documentaries exploring the mysteries of the Bible have consistently fascinated audiences and created compelling conversations in faith-circles. Now, Thinking Man Films, RevelationMedia, and Fathom Events are honored to announce the release of The 7 Churches of Revelation: Times of Fire, arriving in theaters October 11 and 12, 2021.  After the movie, the event features an exclusive panel discussion with leading apologetics experts, enhancing this relevant topic of the Bible’s message to both churches and individuals today.

In the tradition of Patterns of Evidence, Producer/Director Timothy Mahoney welcomes a new investigative filmmaking partner, Christophe Hanauer, a French Christian Producer, and the founder of Millennium Productions, to the Thinking Man Films family.

The feature-length documentary follows Christophe and acclaimed global scholars as they examine the mysterious letters written to seven churches, the roots of persecution in the 1st century church, and how these messages connect to our everyday lives.

“For centuries, there has been a profound mystery surrounding the meaning of the Book of Revelation,” shares Timothy. “We are honored to share Christophe’s film with an English-speaking audience, so Americans can experience these scriptures from a historic, educational perspective, breaking down the messages given by Christ to each of the churches referenced and seeing how it applies to our lives today.” At a time when we are living with much uncertainty, this film asks one of the greatest questions of all, “Are you ready?”

In the first century A.D., Asia Minor experienced a strong ideological revolution. Christianity was spreading like wildfire across the Roman Empire, and was challenging ancient pagan worship and the order established by imperial Rome. During this holistic time is when Saint John wrote his book of Revelation – one of the most complex and mysterious books of the Bible. The text addresses seven churches located in what is now modern-day Turkey, each of whom received a personal letter from the risen Christ.

Passionately interested in the history of Christianity, Christophe investigated the secrets behind the book of Revelation. Who were these churches and what did they represent? Is there a message relevant for Christians living in the 21st century? Could the prophecies of Revelation still concern us today?

Christophe travels to the island of Patmos where the apostle John experienced his vision from Christ and wrote the book of Revelation. With the help of experts, Christophe begins to unravel the mystery revealing evidence of the 1st century church and the letters given to them.

Steve Cleary, founder of RevelationMedia, continues, “Throughout the centuries, the church has gone through times of fire, where their faith was tested in one way or another. Sadly, little has changed when we consider how Christians are being persecuted around the world without mercy. We hope Times of Fire begins a conversation. What part do we play in history as the Bride of Christ? How do these letters apply to us now? And most importantly, are our hearts prepared for when our faith will be tested?”

The October release of The 7 Churches of Revelation: Times of Fire examines the first three churches that Saint John addresses: Ephesus, Smyrna, and Pergamon, as well as the Island of Patmos where the book was penned. The following two films in the series will investigate the other churches, and will be released in 2022 and 2023 respectively.

Fathom Events, RevelationMedia, and Thinking Man Films will show The 7 Churches of Revelation: Times of Fire in movie theaters nationwide on Monday October 11 and Tuesday October 12 at 7:00 p.m. local time. For a complete list of theater locations, visit the Fathom Events website (theaters and participants are subject to change). Tickets are available today at www.FathomEvents.com and participating theater box offices.