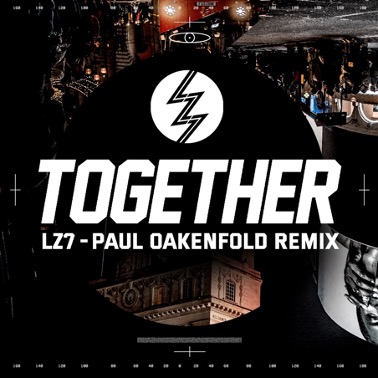 Following the success of their 2019 electronic/pop anthem filled album These Are The Days, and a slew of singles released during COVID 19 in connection with their weekly Cabin Fever Session, Manchester based EDM group LZ7 are back with their newest single “Together” following an exclusive premiere yesterday with Hollywood Life. “Together” is the first release from LZ7 since they went on music release/social media radio silence earlier this year as they prepared for the release of “Together” and more music they have planned for 2021. This single is being released as part of EP bundle featuring remixes from legendary Grammy nominated DJ Paul Oakenfold as a special bonus for fans who have been waiting for new music from LZ7.

When asked about the remix for “Together” with Paul Oakenfold, LZ7 leader Lindz West said, “Teaming up with a legend like Paul Oakenfold is a pinnacle moment for the LZ7 squad. We have been at numerous festivals watching Paul doing what he does best, to collaborate with him is a big honor on our new single “Together.” The huge heartfelt sentiment in the original is just brought to life by the Oakenfold remix. Cannot wait to see dance floors filled with this anthem as we start to get back together in clubs, festivals, and live shows all over. What more do we want than to be together?”  When Oakenfold was asked about making this remix for LZ7 he said,“I’m really happy with this remix, and it’s been getting a great reaction every time I play it out.”

LZ7 is on a quest to perpetuate music that bypasses the intellect and speaks straight to the soul with their infectious melodies, huge drops and back to back anthems. From the start, LZ7 has kept a relevance and honesty about their music, which comes from a heart that sees the best in young people. The band draws on experiences from their own lives which gives the listener a deeper perspective of where they come from, what they are all about and where they are heading with their music. With their infectious melodies, huge drops and back-to-back anthems, LZ7 knows how to rock a crowd at their live show.

Rock a crowd is just what they did all the way through lockdown with thousands turning up online to their livestream events called ILLUMINATE LIVE. Coupled with a number of brand new single releases the band have seen some amazing streaming numbers and UK dance chart Top 5 placements on their anthems “Sound Of The Weekend”, “Won’t Run Out”, “Gettin’ Wild” and “Only Hope” feat. Stacey Skeete of the Kingdom Choir who sang at the Royal wedding of Harry and Meghan. 2021’s release of the new single “Together” with Paul Oakenfold and subsequent follow up releases with the likes of Charlie Hedges at R1 sees LZ7 picking up momentum towards their new album project HUMAN set to be released early 2022. There are some new faces to the line up and a sound that is set to shift and break boundaries for these guys.