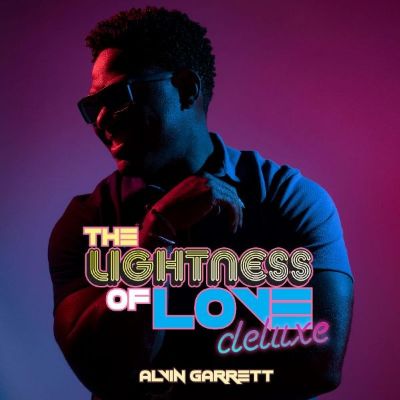 The rising Inspirational Soul artist delivers The Lightness Of Love (Deluxe) with a sophisticated voice and his soulful blend of intricate arrangements and expressive melodies, easily translate to the new songs including; “Flowers,” “Forever,” “Make You Happy,” and “It Feels So Good.” Garrett wrote “Flowers” after discovering the healing power of gratitude in his own life.

“Having personally survived the pandemic, I felt the strong desire to pay tribute to those that have influenced my life and career, and to those that are sowing good seeds in their communities,” says Garrett. “With this song, I’m encouraging everyone to honor their heroes by giving gratitude and ‘Flowers’ while they can receive them.”

Garrett, himself, works closely with one of the nation’s leading reentry and training-to-work agencies, The Dannon Project, which is a non-profit serving multiple at-risk populations. Garrett teaches an innovative songwriting therapy program called, “The Write Life,” harnessing the power of music and songwriting to enhance the curriculum and services provided by The Dannon Project.

Alvin’s acclaimed album The Lightness Of Love (HILL Entertainment) has been lauded as an album that reaffirms the importance of love, connection and togetherness, and has quickly garnered praise with fans and critics alike hailing;

“Alvin Garrett Believes Love Is the Great Unifier — and HeProves It on ‘The Lightness of Love’” – People.com“In a world full of darkness, Alvin Garrett has found the light” – Celeb Secrets“Garrett’s songwriting, captivating smile, and spine-tingling voice is reminiscent of soul music legends, Sam Cooke and Al Green.” – B-Metroan artist with the ability to “…harness the cry for change…” (Gospel Music Fever)“managed to capture the spirit of today’s climate with a few simple words” (WTUG-FM Tuscaloosa, AL)


Most recently, the triple threat singer/songwriter and producer released the music video for title track “The Lightness Of Love,” featuring guest co-star Meredith Lilly, the State Director for U.S. Senator Reverend Raphael Warnock of Georgia and former campaign manager for President Barack Obama. Earlier this year, he performed his emotive, self-penned song “It Starts In The Heart” as the opening to the 56th annual Selma Bridge Crossing, one of the largest annual Civil Rights Commemoration events in the world.

Alvin co-wrote the first #1 to hit the Billboard Gospel Airplay charts this year “Patiently Praising” with Fred Jerkins III of DarkChild Gospel (Michael Jackson, Beyonce, Whitney Houston), and has amassed multiple awards including a Grammy nomination, a Soul Train, Dove and Stellar Award. The Alabama native has an impressive career that’s ushered him to the forefront of Soul and R&B as a professional bassist and producer, arranger and songwriter for Joe, Kelly Rowland, Fantasia Barrino, Ruben Studdard, Jordan Knight, Deitrick Haddon and more. For more information, visit www.alvingarrett.com.

The Lightness Of Love (Deluxe) Tracklisting