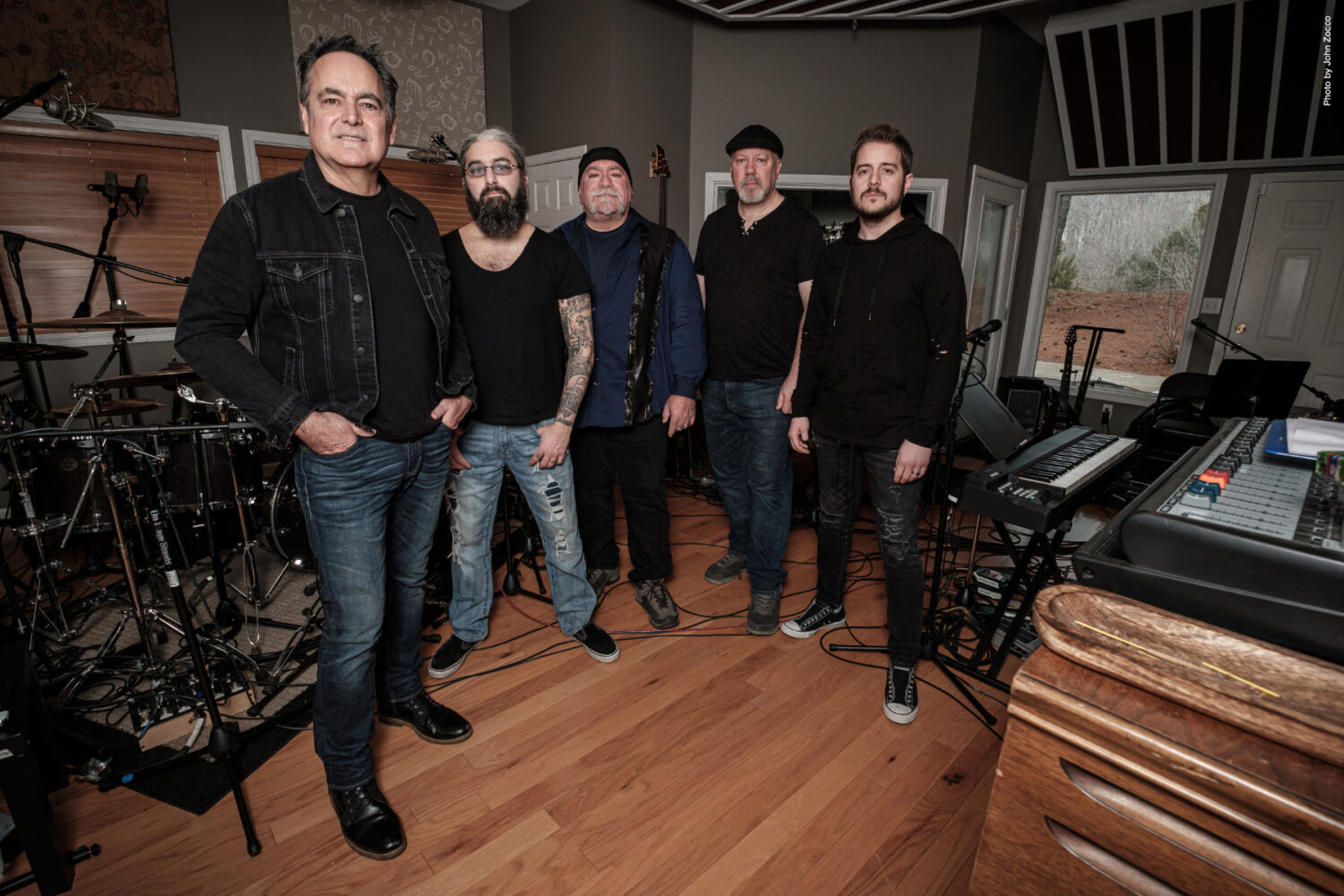 If we’ve learned anything from the great tales of old, it’s that even the most dreadful of dragons can be slain. Fans and doubters alike will often create a metaphorical dragon that cannot be conquered. On the back side of two career-defining and highly celebrated double concept albums, lesser bands might be intimidated by the challenge laid before them – that being to match or surpass successes of the past. In the face of adversity (imagined or real), the band comes out swinging with yet another remarkable collection of quality prog rock anthems. In direct correlation to The Grand Experiment (the band’s first album), Innocence & Danger is similar in that it contains a series of unrelated songs and yet is a distinctly more sophisticated assemblage of tracks. This point clearly illustrates their maturation as a songwriting team. As an album, it feels much more cohesive than The Grand Experiment while coming across as slightly less edgy than both The Similitude of a Dream and The Great Adventure.

The band is comprised of Neal Morse, Mike Portnoy, Eric Gillette, Bill Hubauer, and Randy George. Anyone familiar with Neal’s previous work knows that he has a knack for making progressive rock seem less intimidating to those who might find progressive rock unpalatable. Reflecting upon his years with Spock’s Beard, it’s evident that Neal established a methodical process of blending complex musical elements with indelible melodies and pop sensibilities. Put on your cloaks, dear readers. It’s time for a slightly unexpected adventure. There are far-off musical landscapes to be explored and fierce dragons to be slain! So gird your loins and prepare yourself for the musical pilgrimage upon which we’re about to embark.

DISC 1 – TRACK 1: “Do It All Again” unapologetically heralds the nature of what is to be revealed in the next hour and a half or so then quickly settles back into a winsome melody. The pre-chorus rises in intensity and leads into the chorus which highlights Eric Gillette’s mesmerizing vocal timbre. The rhythmic feel of the second verse uses a double-time feel to heighten the tension. Bill Hubauer’s voice is very distinctive and contrasts so well with the voices of the other vocalists. When they are harmonizing together, a choir of angels just might be tempted by jealousy.

DISC 1 – TRACK 2: “Bird On A Wire” begins with a jarring rhythmic pattern led by drum-meister Mike Portnoy and quickly leads into the basic chord progression for the main verse. The choruses (sang by Eric) are the mountain-top experiences from this song that will be banging around in your head for hours after you’ve returned to regularly-scheduled programming. Randy George seizes the opportunity to highlight his bass skills in a breakdown after Bill’s post-chorus vocal segment. “Bird On A Wire” is one of the most accessible songs on the album.

DISC 1 – TRACK 3: “Your Place In The Sun” is another accessible song which hearkens back to some of the great bands of the past including bands like Toto, XTC, and Jellyfish. Neal, Eric, and Mike exchange lead vocal duties on the verses while Bill lays down some tasty vocals during the chorus section. The song also contains some of the playfulness of past Neal Morse Band classics like “The Ways Of A Fool,” “Hey Ho Let’s Go” and “Vanity Fair.” Eric’s voice sounds similar to that of Andy Sturmer, lead vocalist for 90’s band Jellyfish – particularly in the higher registers – which is probably why the connection was made.

DISC 1 – TRACK 4: “Another Story To Tell” continues the three-track run of commercially accessible songs on the album. The riff for the verse has an infectious groove that just might entice you to (gasp!) dance (albeit a moderately slow dance)! The hook featured in the chorus is addictive. The song ends with a dreamy piano and sparse guitar swells which stealthily ushers the listener into the next song.

DISC 1 – TRACK 5: “The Way It Had To Be” is a mellow, slightly “psychedelic” track a la Pink Floyd with the majority of lead vocals sung by Eric. In contrast, Bill adds his complementary, throaty vocal. A tasty, bluesy guitar solo helps lead you to the promised land of aural nirvana.

DISC 1 – TRACK 6: “Emergence” is a relaxing classical/jazz-inspired acoustic piece. For some reason, the dissonant finger-picked chords chosen for the opening and closing sections sound like something John Mayer might have chosen to use for this song. The relaxing three plus minutes of sensory gold slowly evanesces directly into the next track.

DISC 1 – TRACK 7: “Not Afraid Pt. 1” continues the relaxed feel of “Emergence” while conjuring up memories of some of the great acoustic guitar driven vocal bands from the 70’s like Crosby, Stills & Nash, Simon & Garfunkel, and The Mamas & The Papas. Close your eyes and float downstream.

DISC 1 – TRACK 8: “Bridge Over Troubled Water” is an adaptation of Simon & Garfunkle’s hit song from 1970. The band has taken this classic to a whole new level. During the first two minutes, there’s virtually no musical marker that would indicate the lineage of the song. When the vocals come in at the 2:17 mark, the song becomes instantly recognizable to those old enough to remember the song. There’s a nice string section after the amazingly emotive lead guitar solo. The modulation to a new key takes the passage to a whole new level. If you’re the type to be moved to tears by music, this one just might get’cha. Use of the word “epic” to define this rendition of a classic of this magnitude cannot be impugned except, perhaps, at the hand of the most cynical of listeners.

DISC 2 – TRACK 1: “Not Afraid Pt. 2” is the first of two long form progressive rock sagas which, together, comprise the contents of Disc 2. It begins with a haunting, mysterious piano part which then swells into a classic NMB prog section with an eerie organ that sets up the transition into the frenzied “chop-fest.” And in classic NMB tradition, the bottom drops out as the track mutates into what feels like a brand new song. Some of the specific vocal parts coupled with the corresponding keyboards in this song awakened a desire to revisit some old Styx albums for a well-deserved listen. This is the Neal Morse Band at its best.

DISC 2 – TRACK 2: “Beyond The Years” is a brobdingnagian (huge) song in terms of length. Clocking in at 31:22, this is a musical novella filled with wonder and excitement. There are plenty of melodic and rhythmic pyrotechnics as well as a Gentle Giant-esque vocal passage to delight the true prog-lovers among you. This song, like “Bird On A Wire,” has an extraordinary section which features Randy George’s notable prowess on the bass guitar. You’ll definitely be “transatlanticized” by this song. Consider this a warmup for MorseFest 2022 which will feature Transatlantic both nights. Be there or be quadrilateral! (EDITOR’S NOTE: the reviewer has been on a reading binge lately. Remind him to thank author Jonathan Swift who wrote Gulliver’s Travel for the word “brobdingnagian”). In summary, Innocence & Danger is an immediately likeable collection of well-crafted tunes from a band comprised of profusely competent musicians. It really doesn’t get much better than this. For those who love the art form of music and are sympathetic to Neal’s religious views, this is the pinnacle of (lyrically) Christian-themed music. It seems as though Neal Morse and his mighty band of musical warriors have done it again. They’ve slain the dragon of doubt.