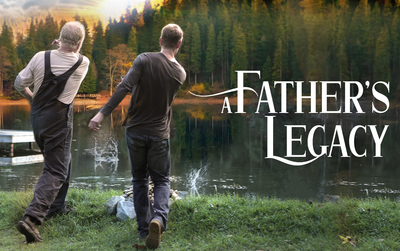 A FATHER’S LEGACY – in Theaters for One-Night Only

After a great reception on the festival circuit, Cinedigm and Fathom Events announced today that the inspirational film A Father’s Legacy will arrive in theaters for a one night event on June 17, just in time for Father’s Day Weekend. After the movie, the event features a conversation with Director/Star Jason Mac and Pastor Brannon Shortt from Bayside Church about the importance of fatherhood, how the choices you make have consequences and additional key takeaways from the film.

A Father’s Legacy is an inspirational story that touches on family, redemption and loyalty as it follows a young man (Jason Mac) on the run after an armed robbery. Hiding from the law, he sets out to find the father he never knew. Venturing further away from the city streets, he finds himself at the secluded home of a stranger (Tobin Bell). As the days pass and the secrets about their past are revealed, they learn that they might not have been looking for each other…but they may have been brought together for a reason.

“This film was born out of one of the most difficult times in my life,” says Writer/Director Jason Mac. “My father was my protector; a guardian I knew would always be there, and then one day he wasn’t. The loss forced me to look inside and really explore what it was to be a father. Too many young men have no male role model growing up, so I hope that becomes a lesson and learning from this film.”

A Father’s Legacy is a fictionalized story but heavy with the emotions of Mac’s own experiences. The film stars acting legend Tobin Bell (Saw Franchise, The Firm), Jason Mac (The Vampire Diaries, Criminal Minds), Rebeca Robles (Reprisal, Ambitions) and Gregory Alan Williams (Remember the Titans). A Father’s Legacy was produced by Mac and John Lerchen, under his Forever Safe Productions banner.

“As we celebrate Father’s Day, Fathom Events is pleased to partner with Cinedigm and bring this powerful story to the big screen,” said Ray Nutt, Fathom Events CEO. “The timing could not be better to release this film with its strong themes and lessons surrounding fatherhood.”

“The theater going experience is about community, and the enjoyment that comes from experiencing stories with our friends and family,” said Yolanda Macias, Chief Content Officer at Cinedigm. “Working with Fathom has given us the opportunity to share A Father’s Legacy with audiences all over the country. It is a story of redemption and unlikely kinship, and it challenges us to look at the relationships we have built in our life. We could not think of a better way to honor Father’s Day than by sharing this film with our audiences.”

Fathom Events and Cinedigm will screen A Father’s Legacy in movie theaters nationwide on Thursday, June 17 at 7:00 p.m. local time. For a complete list of theater locations, visit the Fathom Events website (theaters and participants are subject to change).

An inspirational story of family, loyalty and redemption. After years of searching for his father, a young man, on the run from the law, finds his way into the life of a secluded old man in the woods. As the days go by and secrets about their past are revealed, they realize they may not have been looking for each other but they were brought together for a reason.

About Fathom Events Fathom is a recognized leader in the entertainment industry as one of the top distributors of content to movie theaters in North America. Owned by AMC Entertainment Inc. (NYSE: AMC); Cinemark Holdings, Inc. (NYSE: CNK); and Regal Cinemas, a subsidiary of the Cineworld Group (LSE: CINE.L)., Fathom operates the largest cinema distribution network, delivering a wide variety of programming and experiences to cinema audiences in all of the top U.S. markets and to more than 45 countries. For more information, visit www.FathomEvents.com

About Cinedigm
For more than twenty years, Cinedigm (NASDAQ: CIDM) has led the digital transformation of the entertainment industry. Today, Cinedigm entertains hundreds of millions of consumers around the globe by providing premium content, streaming channels and technology services to the world’s largest media, technology and retail companies. For more information, visit http://www.cinedigm.com/.