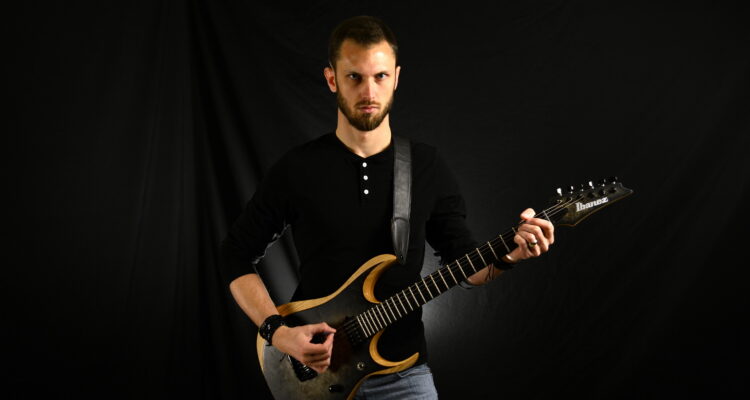 An Interview with Reflection of Glory’s Barry Dreier

Check out our interview with Barry Dreier to find out more about his solo project Reflection of Glory, the inspiration behind his music, and some insight into his upcoming album Escape the Dream.

[JW] For our readers who might not be familiar with you, what would you like to tell them about yourself? How would you describe your music in a nutshell?

[BD] It seems like there’s always a new combination of some way-too-long string of adjectives for metal genres, right?  I describe my music as symphonic, melodic, power metal.  I think it’s a very accessible style of metal for people who are new to metal or don’t like the more extreme genres.  So of course there are others who don’t consider it heavy enough to be “real” metal, but you can never make everyone happy.  About me, I’m just a regular guy who loves making music.  And now, with how technology has advanced, I’m able to make music myself and share it with the rest of the world.

[JW] How long did it take you to write and record this album?

[BD] About three years for the whole process.  I took about a year off after releasing “Reborn” in 2017, and then started working on some of the instrumentals for this album.

[JW] What was the recording process for this album like?

[BD] I do all of my own recording and production, which is both a blessing and a curse.  A blessing because I can constantly go back, tweak parts, rearrange things, and then re-record it all however I like.  It’s very different from traditional recording sessions with a band, where you go into the studio with a very finite (and expensive) amount of time to get everything done.  In that situation, everything has to be worked out ahead of time.  So that’s part of why writing and recording took three years: even after songs were written, I kept tweaking things in the arrangement.  But finally I have to make myself finish a song and do the final recordings.

[JW] What’s your favorite track on the album and why?

[BD] Definitely “The Hound of Heaven.”  It paints such a beautiful picture of the Gospel, and it was so rewarding to work on adapting the lyrics and put together the structure of the song.  My absolute favorite moment of the whole album is towards the end of the song, where the Hound (representing God) speaks to the protagonist:

“Who can you find, who will love you as I? Coming down from on high to pursue you, your dead heart to raise!  All your life, all the idols you chased, as I took them away to protect you, by omniscient grace.  Like a child, you cannot comprehend, my eternal plan to redeem you, now come follow Me!”

I can’t get over that, which God has done for me by changing my own heart, and offers to anyone who would repent and believe in Jesus.

[JW] What was it about the Francis Thompson poem “The Hound of Heaven” that made you decide to base one of your songs on the poem?

[BD] Fun story: it started as a suggestion from a fan on social media.  That’s one of the cool things about the world we live in now: being able to connect with people who have the same beliefs and taste in music from all over the world.  Anyway, he suggested using the poem as an idea for a song, and it was something I kept being drawn back to as I was writing the album.  Once the concept for Escape the Dream really came together, I knew I just had to do “The Hound of Heaven.”

[BD] It varies from song to song.  Sometimes I’ll start with an overall idea for the topic of a song, other times bits of a chorus or verse will come together, or instrumental sections will be written before there’s any lyrics or concept for the song at all.  To give some examples from Escape the Dream: I started with the overall concept for “The Curse Within My Blood” and worked out the lyrics to match.  Then came the instrumental writing: guitars first and orchestrations second.  But with “Holy War,” the lyrics for the chorus came first, which bounced around in my head for quite a while before the rest of the song came together.

[JW] What inspired you to start making music?

[BD] That’s harder for me to really put my finger on.  It seems like I’ve been making music my whole life, growing up in a very musical home and taking some sort of music lessons from a young age.  But specifically for starting Reflection of Glory, that came from a spiritual conviction to use the music God has given me to glorify Him.  This project isn’t about me trying to get famous.  My aim is to use my gifts to show the character of God to others – to reflect His glory.  Some of that is a reaction against so much of pop Christian music, where many musicians’ brand is built of their own names and faces.  And I’m not trying to bash anyone for doing that, but I intentionally want my music to not be built upon my own ego.  So if I’m able to use what God has given me for His work and to encourage others, I’m excited to do whatever I can.

[JW] Who are some of your musical influences?

[BD] From both a musical and spiritual perspective, Theocracy has been a major influence for me.  I’ve always been a fan of really driving power metal with big vocals, and they’re one of the best.  Another big musical influence is Nightwish, who are one of the big pioneers of symphonic metal.  They’re a secular band for sure, but there’s a power and majesty in their music that can be appreciated regardless of their lyrical themes.  Studying music in college, I’ve also been heavily influenced by composers like Bach, Mozart, and Mahler in how I put together the orchestral side of my music.  Not that I’m claiming to be anywhere close to their talent!  But I really enjoy their style and try to integrate aspects of it into my own music.

[JW] What are some of your favorite albums or musical artists to listen to?

[JW] Who would be your dream musical collaboration?

[BD] Definitely would be working with Matt Smith of Theocracy.  Just by going off of his public persona and the content of their music, I think we would have a lot of common ground to work from.  Who knows, maybe one day I’ll get the opportunity!

[JW] What has been a moment in your musical career thus far that really stands out to you?

[BD] As corny as it sounds, getting my first fan mail.  A guy from Austria had discovered my music and emailed me, just to talk about the songs, music in general, and our Christian faith.  It was just a really cool moment, to see how music speaks to people across the world.  And especially the brotherhood we all have as believers, that we’ve been adopted into the family of God, that we can immediately have a relationship because of our faith.  So a really small thing, but a cool moment for me with a really good reminder.

[JW] The cover art for this album is very intriguing and beautiful. Is there a particular story or inspiration behind it?

[BD] The story behind the cover is the concept of Escape the Dream, and there’s a few different layers to the imagery there.  Dreams are a reflection of our waking reality; in the same way, the world around us can be just a shadow of the true spiritual reality.  And just as our dreams – those things we long for – can turn out to be insubstantial and ultimately unfulfilling, living merely in the physical or carnal world around us is ultimately insubstantial and unfulfilling.  Another level to the cover: evil comes from within, and is often disguised as something beautiful and desirable.  Satan appears as an angel of light, and so many of our sins and idolatries are corruptions of things originally good.  The album art really captures the essence of the music, so I’d like to thank Jan from Darkgrove for putting it together for me.  The more closely you study the art, the more connections you will find to the themes of the songs.

[JW] What do you hope to convey to listeners through this album?

[BD] I hope that it is a call for people to wake up, to open their eyes to spiritual Truth.  For unbelievers to see the God that pursues, saves, and redeems.  For believers to see the struggle we face every day against our sin and our own sinful nature.  For all of us to have our minds renewed, that we would escape the dreams that this world offers us, and instead to see the truth of reality that God has put into all things.  That instead of hoping in our dreams, which will fade away, we would hope in the God who never changes.

[JW] And how about a fun question to wrap things up. If you could select any song as a personal theme song that played every time you walked into a room, which song would you choose and why?

[BD] Fun and random!  A whole song would play every time I enter a room?  That would get old, fast! I guess I would choose the “ba dum” sound effect from Law and Order.  That seems like an appropriately dramatic way to enter a room and get everyone’s attention.  I see a lot of potential there for some jump-scare pranks on friends…

[JW] Thanks for taking the time to talk to us today Barry, we wish you all the best with the release of Escape the Dream on January 31st!

[BD] Thanks for having me!  It’s been a lot of fun discussing Escape the Dream with you!

Read our review of Escape the Dream