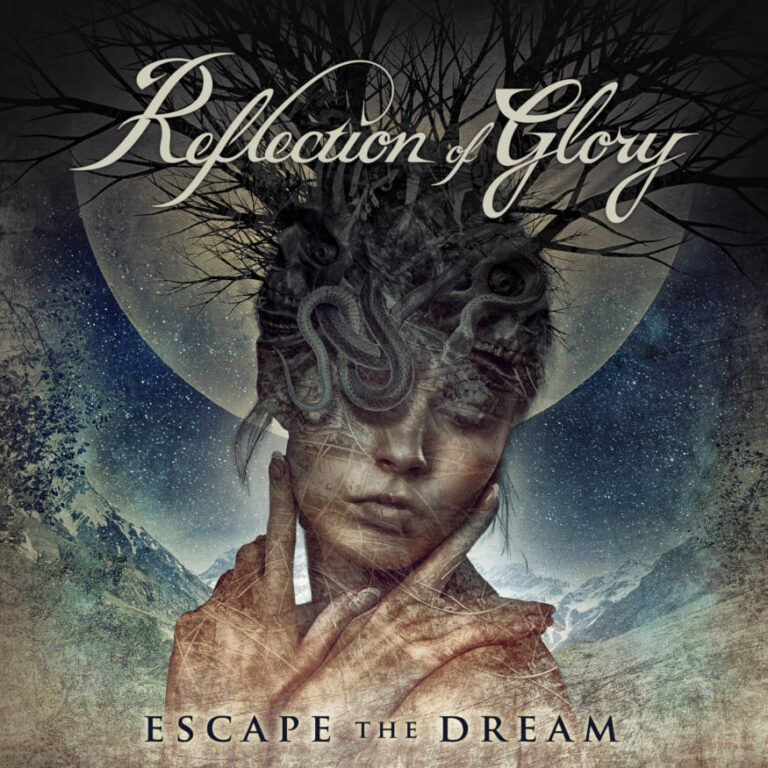 Reflection of Glory Awakens the Imagination with Escape the Dream

Escape the Dream is the second independent release from Reflection of Glory, the solo project of Barry Dreier. It offers a vast and rich musical landscape with its symphonic metal, perhaps something different than what one would typically think of as “Christian metal.” This whole album is truly an experience, with its sweeping orchestral interludes and heavy guitars, to its deep, poetic, introspective lyrics. It’s quite evident that Barry Dreier put much thought and effort into every detail of this project.

The journey into epicness begins with “The Hound of Heaven,” based on a poem of the same name by Francis Thompson. The song starts with thundering drums and a flurry of strings, building to a crescendo with a full orchestra joining in, only to drop off into a brief moment of silence. A clear ringing chime is sounded to interrupt the silence, ushering in a full rock band joining the orchestra. Throughout the song, there is a healthy dose of crunchy guitar licks and searing guitar solos, melding seamlessly with the orchestral swells.

“The Hound of Heaven” tells an entire story: man’s rebellion, our Savior’s pursuit of us, His rebuke of our sins, the death of our sin nature, and finally, our restoration to a right relationship with God. And there are many instances where the music helps emphasize the meaning of the lyrics. One such instance is the chapter titled “Confrontation,” which starts: “My soul laid bare, my heart naked and uncovered, my armor ripped asunder by Your hand.” The orchestra drops out, baring the driving, heavy guitar. The grit of the music reflects the turbulence of the lyrics. Likewise, when Dreier sings of the King of Heaven enthroned in majesty, the music is very fitting and majestic as well. The song finally reaches a stormy climax only to dissolve into a peaceful mist, followed by a moment of serene, calming music. The song ends with a return to the main rock themes and chorus, now with more hopeful lyrics singing of the Hound of Heaven who has made us whole and brought us home.

Next up is “Holy War” which starts with a satisfyingly heavy guitar solo, setting the tone for the song to follow. “Holy War” seems to feature your typical rock band sound more, with orchestral elements woven throughout. The guitars are heavy, the bass has an immense presence, and the double bass drum pedal work is quite impressive. There is a choir of voices adding an ethereal air to the verses. The lyrics express an inner war for peace, a striving to be righteous. We have this tendency to leave the good and seek the wrong in our lives, yet still, our Savior fights for us and replaces our filthy rags with His own perfect righteousness.

“The Curse Within My Blood” begins with dark and ominous strings, almost like a storm cloud descending upon the horizon. The staccato vocals at the beginning of the verses underscore the stormy nature of the lyrics, lamenting our cursed souls marked for death, enticed by the lies of a smooth-tongued serpent. The dark nature of the music continues throughout the song, reflecting the conflicted nature of the lyrics. The strings continue to slither amongst the rest of the music, and trumpets punctuate the feelings of strife. The song ends with a superb and almost bluesy guitar solo.

“Folly of the Fall” changes things up musically, with a much more gentle feel. The song starts with a gentle piano and harp and a sweet female voice, Eve contemplating reaching for the alluring fruit, the tempting possibility of knowing everything just like the Divine. Dreier takes over the vocals in the second verse. About halfway through the song, the heavy guitar and drums kick back in with energy. The female voice joins in harmony, both voices bemoaning their grave mistake by giving into temptation, and the realization that there is no turning back. “Sleep With the Lie” is another slow tempo track. The piano and strings are at the forefront, with dancing arpeggiation throughout the song on the piano, and a somber cello giving way to a full, rich string section. This song ponders our tendency to sleep with the lie rather than wake to the truth that could set us free.

The album begins to wrap up with “Beyond Evermore,” a track that mirrors the grandeur of the opening track. The beginning is somber, with mainly the string section and a lone oboe dancing above. About a minute in, the song really kicks in with the full rock band and orchestra. Much of Escape the Dream deals with struggle, fighting against our sin nature, but “Beyond Evermore” shines a light into the dark and offers a ray of hope. Though we may be tempted to stray from the straight and narrow path back to old, comfortable habits, our Guide won’t let us stray. He gently leads us into the light of everlasting day. He beckons us to escape the dream, the illusion, that this world is all there is, and implores us to see the beautiful spiritual reality that lies just beyond.

The album ends with “Escape the Dream.” It’s an overture of sorts, an instrumental track that recaps all of the musical themes from the album. It almost feels like the end of the soundtrack of an epic fantasy/adventure movie. And this album is kind of like that. It takes us through various stages of the human experience, from the dawn of temptation, to giving into sin’s allure, to the internal battle of good versus evil; running and trying to hide our true selves from the One who sees all, and finally realizing the relief of giving our burdens completely over to the One who can fully bear it all. Escape the Dream takes us through all the emotions, yet the album ends on a triumphant note. If you’ve ever wished your life could have a soundtrack to make it feel more like an adventure movie, this album just might be it.