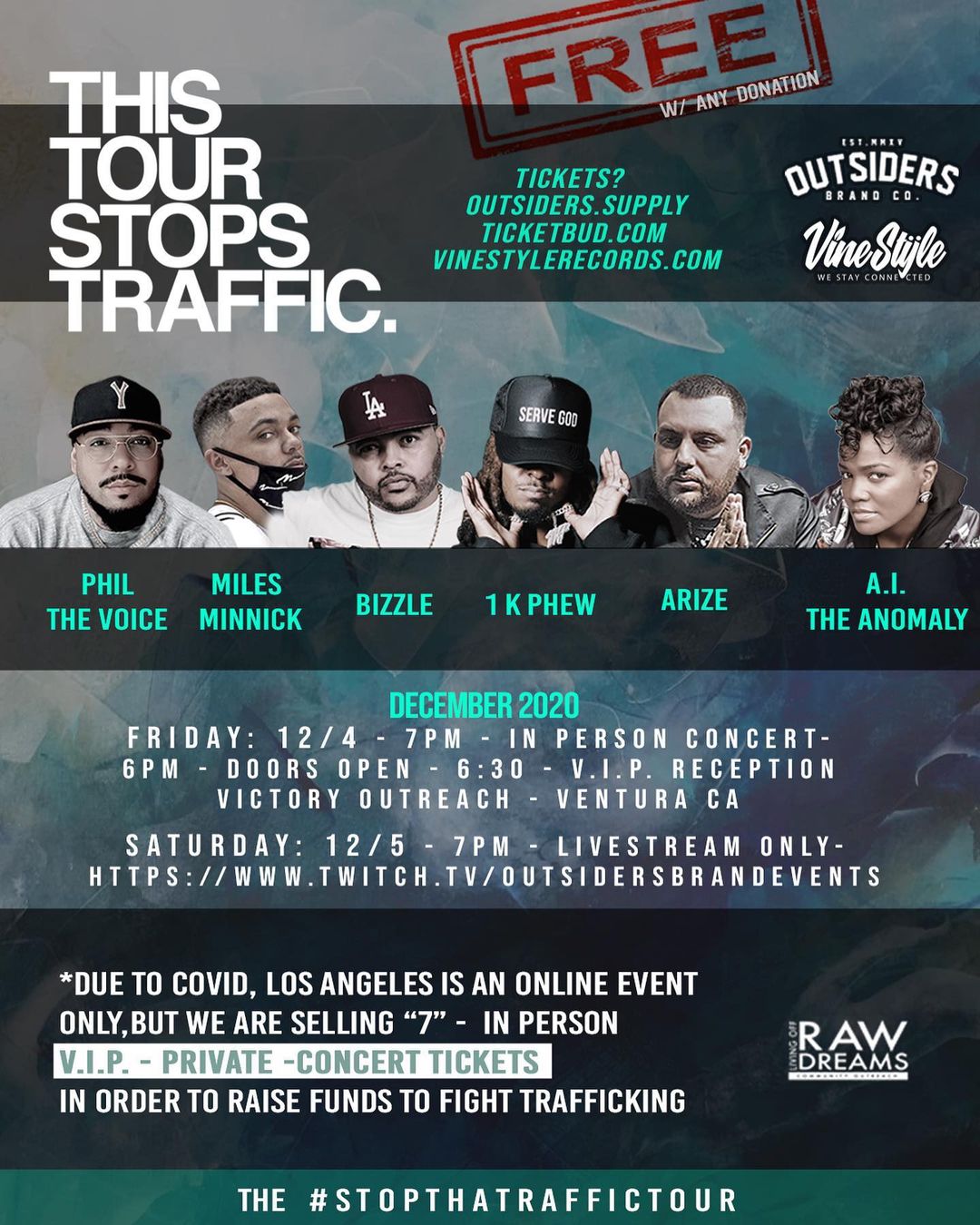 This Friday, December 4, hip hop artists unite to raise awareness about boys caught in sex and human trafficking rings. The “Stop That Traffic” tour, featuring Phil the Voice, 1K Phew, Bizzle, Arize, A.I. the Anomaly, and Miles Minnick, kicks off at Victory Outreach located at 2875 Elba St., Ventura, CA 93003. Doors open at 6 p.m. and the VIP reception begins at 6:30 p.m. Admission is free with any donation. One hundred percent of the proceeds benefit Project Rescue.

The events will follow the COVID-19 Industry Guidance provided by the California Department of Public Health for places of worship and providers of religious services and cultural ceremonies. This will include posting signage at the venues and on social media reminding attendees to wear face masks and practice social distancing. Handwashing stations will be on site. Attendees will be screened for temperature and/or symptoms upon, arrival and masks will be made available if needed.

The second date on Saturday, December 5, will be livestreamed at 7 p.m. via Twitch at https://www.twitch.tv/outsidersbrandevents. Seven in-person V.I.P. private concert tickets will be sold for this date to be filmed at Nations Church in Los Angeles, 8460 Tampa Ave., Northridge, CA 91324. The tour is produced in partnership with Phil the Voice and Outsiders Brand urban apparel company and lifestyle brand.

The “Stop The Traffic” Tour has three goals, Phil explains. “We want to first off, raise awareness,” he says. “Secondly, we want people to be able to recognize when people are trafficked. And third, we want to be able to report it. With that being said, Of course, the implication is that salvation is transpiring.”

Outsiders Brand Founder Vince Serrano IV explains that sex and human trafficking is a bigger problem in the U.S. than many people may realize. “Some people think this problem is only on the other side of the world, but there was a sex trafficking ring busted near my home recently and it’s become a reality to me now,” he says. “This situation is in our backyard. So I’m putting action to my prayers by doing my small part. If everybody does their small part we can all make a big difference.”

While the tour will take on the serious social message of anti- human and sex trafficking, the tour stops will also deliver good energy. “These shows are going to be highly entertaining, high-quality sound, lights, everything,” Phil says. “These different artists represent a variety of ministries which are making a real impact in their respective communities already. We reached out  to these other artists because first off, they are amazing artists, and ultimately there is always greater strength in numbers. I believe we will do far more to fight human trafficking and raise awareness together than we could separately.”

Phil sheds light on the global crisis that results in more than 1,000 boys being trafficked everyday in the “Stop That Traffic” song and music video. The video depicts a young boy in a warehouse with his hands tied as Phil raps, “For that boy in the cold getting sold everyday now, broken and living in shame, him momma and daddy done sold him away … situation be tragic, red light, red light, better stop that traffic.”

The “Stop The Traffic” initiative was inspired by Phil’s wife Melanie, who recently traveled to Greece & Spain to help Project Rescue’s fight against human trafficking and other refugee issues. Hearing her stories prompted Phil to write “Stop That Traffic.”

“Human trafficking and sexual exploitation are often thought to be a female issue,” Phil says. “Yet the stats clearly show that men are a significant percentage of those affected.” The subject also resonated with Phil who is a survivor of child abuse. “Going through abuse myself, as a child, in the church at that, I kept it a secret until my 20s, out of fear of judgment,” he said. “Men tend to receive stigma and dismissal when they share their similar stories. According to a few academic journals I have read, this taboo and subsequent harsh treatment are intensified exponentially by men who have experienced human trafficking. As a result, their voices are not being widely heard. My song gives a voice to these boys.”

To purchase tickets for the “Stop That Traffic” tour, merchandise or music, visit HERE.

Outsiders Brand is an urban apparel company and lifestyle brand that remains missional in all of its activities. It was founded by Vince Serrano who has collaborated in clothing and ministry efforts with such artists and record labels as: 1K Phew, Bizzle, Datin, The Rep, Reconcile, G.O.M., Reach Records, Kingdom Muzic, Vine Style Records, Rize and Shine Media, Infantry, The Tunnel Rats and many others. It’s their goal to live out a lifestyle of love and gospel mission.