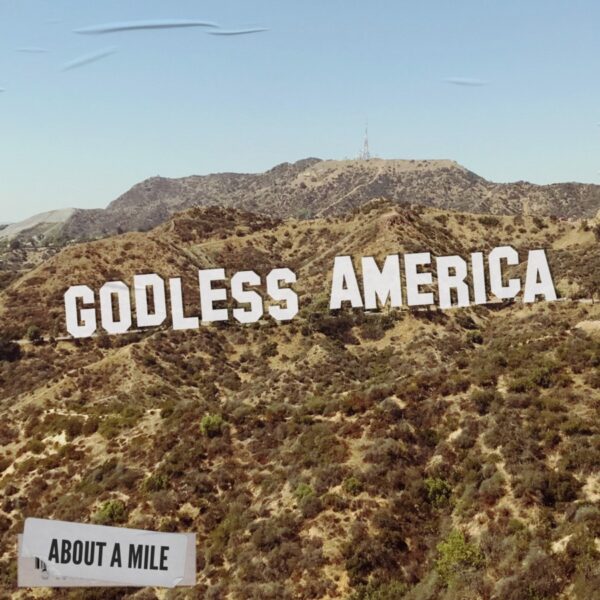 About A Mile Releases “Godless America,” Calls Nation To Repentance

Launching the biggest-selling Christian album debut from a new artist in 2014 followed by the five-star-acclaimed sophomore recording, Trust You All The Way (2016), Dove Award-nominated About A Mile releases its first new single in over two years, “GODLESS AMERICA.” The song is available at digital retail and streaming outlets everywhere now from Radiate Music.

Produced by GRAMMY®-nominated, two-time Dove Award-winning Producer of the Year, Ian Eskelin, the song continues the band’s message of hope in the Gospel and calls America to repentance.

“Americans have the choice to know about their sin and love Jesus, or to love their sin and know about Jesus!” exclaims About A Mile frontman Adam Klutinoty. “Jesus is still Lord and Americans are still sinners either way; but one path leads to heaven and the other to hell. A society that chooses evolution, murdering babies and perversion and then most frighteningly calls it good, I pray stops denying God’s existence, falls on its knees and repents! Grace is still available.”

The band’s previous single, “Make America Great Again,” opens with the voice of former U.S. President Ronald Reagan declaring, “If we ever forget we are one nation under God, then we will be a nation gone under.” The song’s lyric video was premiered by LifeZette, which was co-founded in 2015 by political commentator and talk show host Laura Ingraham.

More than the successes of playing Christian music’s biggest stage (Winter Jam), receiving a series of radio hits, having their song “Born To Live” heard by over 293 million people via YouTube’s Dude Perfect and receiving many other accolades, About A Mile band members and brothers Adam, Luke and Levi Klutinoty have resolved to trust God with every aspect of their lives and ministry.

With a name that originates from the belief that Jesus carried his cross “about a mile,” the band has carried its message coast-to-coast with bands like Skillet and Sidewalk Prophets. Lauded for their musicianship, authenticity and labeled “musical chemistry perfected” by one critic, all the latest About A Mile news can be found at www.aboutamile.com, Facebook, Twitter, Instagram, YouTube, iTunes and Bandsintown.