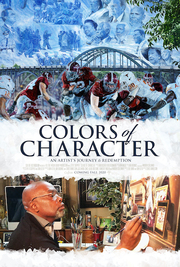 Fans of sports artwork will know the name Steve Skipper, one of the most prolific painters in the genre. Skipper had no formal training, yet his style, talent, and impact is unmatched.  His life as an artist is just a small slice of his journey, and now Skipper’s story is being told through the theatrical-length documentary COLORS OF CHARACTER: An Artist’s Journey to Redemption, will be shown in theaters in November 2020.  On November 11 and 12, the film will be shown during prime-time screenings and November 14 and 15 during matinee showings. COLORS OF CHARACTER will be released through a partnership between Collide Distribution and Iconic Events.

After being premiered on The Christian Post, the trailer for the film launched today.

“In today’s world of disruption and chaos, Steve’s story reminds us that we serve a God of unity and redemption.  We’re so excited to share this amazing journey of redemption with the world,” says Bob Elder of Collide Distribution.

Skipper’s story is nothing short of extraordinary. As a teen, Skipper was a member of one of the world’s most notorious gangs, but after an encounter with Christ, his life was forever transformed. Understanding his calling as an artist, Skipper fearlessly began to hone his craft, a meticulous style of super-realism.  Throughout his career, Skipper has broken down doors of racism in the art world as the first African American to complete artwork sanctioned by NASCAR, the University of Alabama, the PGA, PBR, and with unveilings at the MGM Grand and the Monte Carlo in Las Vegas and at Chelsea Piers in New York.  The Colors of Character film not only shares Skipper’s life in his own words but also features interviews with key figures in Steve’s life, from ministers to sports figures to Civil Rights icons.

Film director Chris Danielson shares the heart of the film: “Steve’s story is a reminder that we can never wander so far away that God’s love cannot reach us. It’s also a reminder that when God gives us a calling, it’s our responsibility to steward those gifts and be faithful to the opportunities given to us.”

COLORS OF CHARACTER: An Artist’s Journey to Redemption will be shown in theaters across the country beginning November 11, 2020.