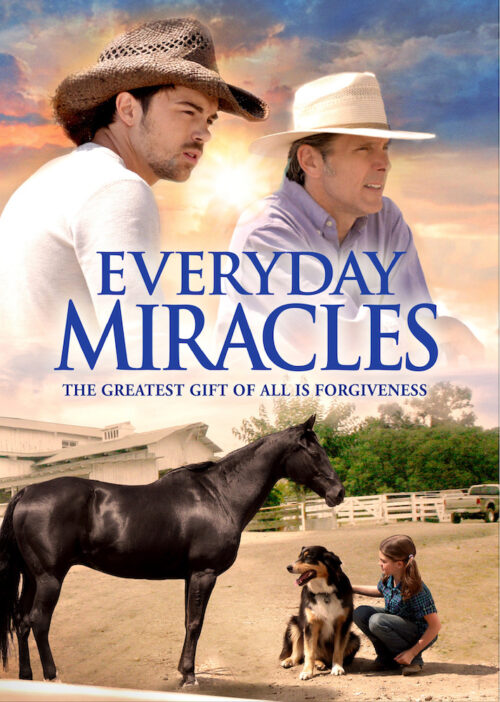 Aug 5, 2020
A little faith goes a long way. After spending most of his life under his manipulative mother, a reluctant faith healer comes to learn that some of the best things in life are the EVERYDAY MIRACLES. The inspirational film stars acting veteran Gary Cole (VEEP, Entourage), along with Erik Smith (A Walk to Remember) and Zoe Perry (Young Sheldon). Written and directed by Marty Madden (Musical Chairs), the film is available September 1 On Demand, Digital & DVD.
A reminder that the world is full of EVERYDAY MIRACLES, this family film centers around a faith healer, Cotton (Smith), who is trying to run from his troubled past. After being taken in by a horse rancher (Cole) and his family, Cotton’s new life is soon tested when his overbearing mother (Lusia Strus) tracks him down and tries to pull him back into the life he had escaped. Cotton is desperate to avoid his past life which could jeopardize a possible future with his love interest, Young Sheldon’s Zoe Perry. When a painful revelation comes to light, he must lean on his new family and learn to trust again. Through his journey, Cotton learns the value of compassion and family through hard work and selflessness.
EVERYDAY MIRACLES was produced by James J. Bagley & Tom Tangen. Co-Producers are John Rogers, Michael Donahue, Ray Michaels Quiroga, Tara Lonzo, Andres Agazaryan and Janet Winchell.  Associate Producers are Frank Mora, Michael Quiroga, Jimmy Dux, Liz Rodriguez and Fernando Gonzalez.