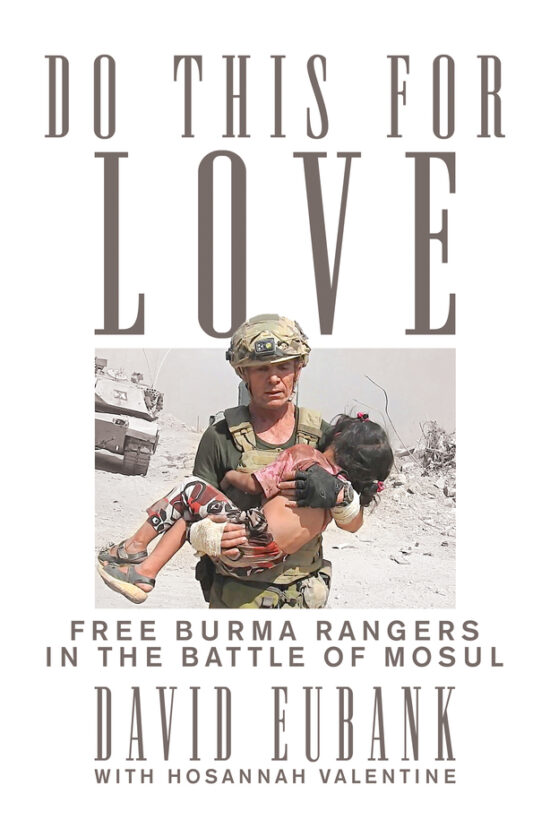 New Book: David Eubank – “Do This for Love”

Author David Eubank, along with Hosannah Valentine, gives us the compelling true story of learning the difference between justice and revenge and loving others at all costs, with his new book Do This for Love; Free Burma Rangers in the Battle of Mosul. From Burman to Sudan and Iraq to Syria, the Free Burma Rangers have given help, hope and love to people under attack.

The fiercest urban battle in recent history, to retake the city of Mosul from ISIS, lasted nine months. Thousands were killed, millions displaced. How to help in such a massive and desperate situation? Eubank, a former member of U.S. Army Special Forces and a Ranger officer, is the founder of the Free Burma Rangers (FBR), which is a multi-ethnic and faith relief organization. He and his family share the love of Jesus in Burman, Iraq, Kurdistan, Syria and Sudan by giving help, hope and love while shining a light on the situations of the people in these troubled areas.

As coalition forces, led by brave Iraqi soldiers on the ground who slowly pushed ISIS out, the brutality of the terrorists was turned against thousands of civilians as they fled the fighting. There was no humanitarian template for responding to such ruthlessness; to attempt to help would take total commitment.

Birthed in the war zones of Burma to stand with villagers under attack by the Burma Army and provide medical care, relief and reporting, the Free Burma Rangers came to Mosul with 20 years of war zone experience in the jungle. Led by Eubank, medics, cameramen from the teams in Burma, other foreign volunteers, and David’s wife and three children, they came to fill the gap between the frontlines and the humanitarian community. They came living by the conviction that every person counts and the only force that can defeat hate is love. Four team members were wounded and one killed as they lived out that conviction with total commitment. This is their story of praying with faith, acting with courage and never surrendering.

Praise for Do This for Love

“Dave and the Eubank family have miraculously lived through countless dangerous and difficult circumstances with the Free Burma Rangers, offering life-saving rescue, medical aid, food, water, and shelter to people—pushed from their homes by war zones overwhelming their lands—who would otherwise be helpless and hopeless. Some of us hear or read about biblical selflessness, some of us even write about it. Do This for Love will leave an indelible mark on you as the true story of the FBR’s work in the face of ISIS brutality in Mosul, Iraq unfolds before you.” — Oliver L. North, bestselling author of The Rifleman

“Dave Eubank is arguably one of the most combat-hardened warriors in the world today. Since the mid-1990s, he has been putting his life on the line for the benefit of others, going boldly with humility into the hottest zones on the planet. What can you learn from him? Get a highlighter ready, because this book will help you understand the mind of a humble warrior and why the key to survival in the battles we all face in life comes down to avoiding being motivated by comfort, fear, or pride. This is a story of faith unlike any you have ever seen. It is not for the faint hearted or the milquetoast Christian.” — Chuck Holton, former U.S. Army Ranger, freelance War Correspondent, author and motivational speaker

“The captivating story of Dave Eubank and his Free Burma Rangers reads as a modern version of the stories of the Knights of the Round Table. Free Burma Rangers also “take no battles in a wrongful quarrel for no law, ne for no world’s goods”, as in the Knights´ oath. Today´s secular West often looks back with aversion to its – admittedly not always exemplary – Christian heritage. But Dave Eubank, his family and many of his fellow rangers are genuine Christians who do what they do for love, and they take these biblical words seriously: “For I was hungry and you gave me something to eat, I was thirsty and you gave me something to drink, I was a stranger and you invited me in, I needed clothes and you clothed me, I was sick and you looked after me, I was in prison and you came to visit me.” The multi-ethnic and multi-religious Free Burma Rangers made this their mission, when helping people oppressed by the military in Burma or by the ISIS in Iraq and Syria. In doing so, they get injured, and some die. They are the heroes of old transferred to our time.” – Ambassador Jiri Sittler, Czech Republic

“Dave Eubank is a singular individual with a most unique calling, and that’s an understatement. I’ve never met anyone like him—ever! His life is a refreshing blend of GI Joe and Adoniram Judson. You’ll find Dave’s story of the Battle of Mosul a compelling, heartwarming, and faith-inspiring one. If you’ve ever wondered if there are modern stories of Bible-like heroism inspired by faith and love, then you have the right book.” – Skip Heitzig, Senior Pastor, Calvary Church, Albuquerque, NM. Bestselling author of The Bible From 30,000 Feet

Purchase the book on amazon