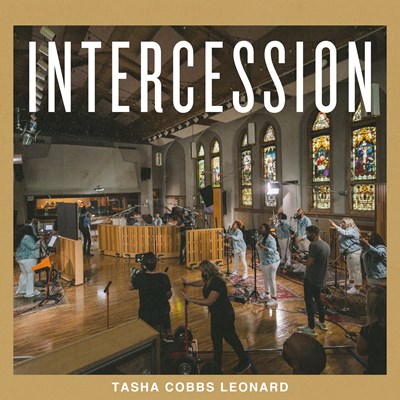 Top-selling artist Tasha Cobbs Leonard, releases a new 4-song EP, Intercession, available today on all platforms. Announced for the first time earlier this week, Intercession is a 20-minute worship set that was captured LIVE at Nashville’s historic Ocean Way Nashville. A powerful long-form video, featuring each song from the EP, will premiere during a live chat with Tasha on her YouTube channel today at 12pm ET.

The inspiring lead single “Let It Fall” reminds listeners that the glory of God was never meant to be driven or controlled by us; it was meant to be carried. The EP harmoniously shifts into the passionate, simmering moments of “Move (Out Of The Way)” and “Hallelujah (You Get The Glory),” before closing with the high-spirited refrain “He is Lord.”
Still on track to record the highly anticipated LIVE recording, Royalty: Live at the Ryman this August, Tasha Cobbs Leonard continues to be moved by her passion to connect people to God, offering Intercession as a timely antidote for a troubled world.
Currently the top-selling female artist in gospel music, Tasha Cobbs Leonard first entered the global music scene with the 2013 release of her RIAA® Platinum debut single, “Break Every Chain.”  Since then, Cobbs Leonard has amassed multiple #1 singles, four GRAMMY® nominations, numerous Stellar Awards and Dove Awards, and two RIAA® Gold albums. Tasha Cobbs Leonard has earned the Billboard Music Award for Top Gospel Artist for the past two consecutive years. Royalty: Live at The Ryman will be Tasha Cobbs Leonard’s first full album of new material since the 2017 release of Heart. Passion. Pursuit., which remains one of the highest-selling gospel albums of the past five years.