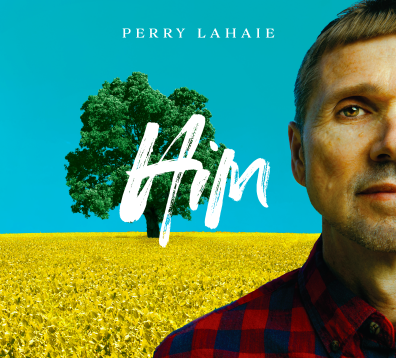 Him By Perry LaHaie Rescheduled for Summer 2020 Release

Singer/songwriter and morning drive-time radio host Perry LaHaie has rescheduled the release of his long awaited new full-length album, Him. Originally slated for a May 15, 2020 release date, Him will now impact retail Summer 2020.

“This new project has been a long time in the making,” LaHaie acknowledges. “But the long process has been God’s way of creating something more beautiful and compelling. This 10-song collection of original songs and reimagined hymns tells the grand, epic story of God. It’s a story that began in the heart of God: the creation, a tragic fall, a rescue plan, and a commission for those rescued to speed the day that C.S. Lewis describes as ‘the beginning of the real story… which no one on earth has read: which goes on forever: in which every chapter is better than the one before.'”

The project launches with the driving call-to-action anthem, “Cast Yourself In,” with its invitation to abandon yourself to the raging river of God, and be swept away by it to bring living water to the nations.

LaHaie’s reimagined version of the world’s most beloved hymn, “Amazing Grace (Send Me),” remains faithful to John Newton’s original vision, but with a compelling twist as LaHaie urges listeners to share God’s amazing grace throughout the nations. The anthem segues seamlessly into the original song, “O Mystery of Mysteries.” The song takes on special meaning for LaHaie, as his daughter Kali and son Taylor collaborated in its creation. “Because of their input, the song became something I could never have created on my own,” LaHaie muses. “I believe Jesus worked through us to create and express the beauty of our Lord’s great mission to bring the Kingdom of God from heaven to the Earth.”

LaHaie returns again to another great hymn, the anthem of joy and worship, “O For a Thousand Tongues to Sing,” that includes a new chorus that envisions the day when a number no one can count is crying:  “Jesus is Lord!” “Solid Rock” continues the progression of setting old gems in new settings, as LaHaie allows the revelation of Christ’s redemptive power to wash over the music. When mountains fall and planets break, on Christ alone I’ll stand, he exults in the song.

“The idea for ‘Solid Rock’ was birthed during Sunday morning worship while we were singing Jennie Lee Riddle’s ‘Revelation Song.’ I thought the chord progression of the song would work with the melody of ‘Solid Rock.’ I was so moved by how it changed the whole tone of the hymn. After all creation is undone and then remade, I will still be standing on Christ the solid rock who took my judgment day for me,” LaHaie declares.

“Rock of Ages” continues LaHaie’s awe-evoking re-imaging of classic hymns. On this beautiful worship anthem, he shifts the focus from the plea of a single sinner for the Rock of Ages ‘cleft for me,’ to a heart’s cry for the redemption of the whole world. Not just me, bleeding Lamb, let mercy flow throughout every land, LaHaie entreats.

Originally written by Charlotte Elliott in 1835, “Just As I Am,” emerged as one of the most familiar hymns in the world after it became the signature invitation song at Billy Graham Crusades. The song has lost none of its potency after nearly two centuries, yet LaHaie’s reimagined version imbues this come-to-the cross hymn with new life and a new chorus that adds exclamation points to the timeless verses.

“God Is Working His Purpose Out” is perhaps less familiar to contemporary listeners, but no less powerful for its obscurity. Dedicated to those who weep for the nations waiting to hear the message of new life in Jesus, LaHaie’s son Taylor is credited with breathing new life into this hymn. This song anticipates the day “when the earth will be filled with people who know the Lord, like the waters fill up the sea,” and it’s a call to hasten that day by bringing the message of new life in Jesus to those still waiting to hear.

John Newton’s contemporary and frequent collaborator, William Cowper, penned the evocative hymn, “There Is A Fountain.” LaHaie takes Cowper’s image of the life-giving flow of Christ’s blood and expands it to a rushing river that flows to the nations–a river that will keep rushing until every nation cries, Worthy is the Lamb!

LaHaie perfectly bookends that song with the wistful carol, “O Come O Come Emmanuel (How Long),” the debut single from Him. Far from being just another Christmas song, LaHaie’s embellished version aches with the longing for Christ’s long awaited return. The songwriter also collaborated with emerging filmmaker Aaron Harris to create the yearning lyric music video version of the song.

“How do you visually communicate our longing and the longing of all creation for Jesus to come again?” LaHaie ponders. “How do you communicate visually a prayer that cries out, “Jesus! How long till you come again make everything right? How long till you make good on your promise to sweep away every tear, every sorrow, every injustice, even death itself forever?” Those were my questions when I considered creating a lyric video for “O Come O Come Emmanuel (How Long).” God used emerging filmmaker Aaron Harris to answer those questions.” Fans can view the video online at youtube.com/watch?v=JJq9GzYodYg.

Collectively, the ten-song collection of original songs and reimagined hymns that comprise Him tells the story of God–of His great rescue plan to bring His love to every tribe, tongue, and language on the planet, to rescue all creation from sin and death through the cross, the resurrection, and Christ’s second coming. It offers an impassioned appeal to bring this good news to those who have never heard it, including over 1,000 Muslim people groups that are still waiting for the gospel.

“It was hard to give up the singer/songwriter part of me to do Him,” LaHaie admits. “There was some pride that had to be surrendered. But that surrender led to God working something new in me–an album of reimagined hymns of amazing grace with new choruses and bridges that call us to take His grace to the world.”