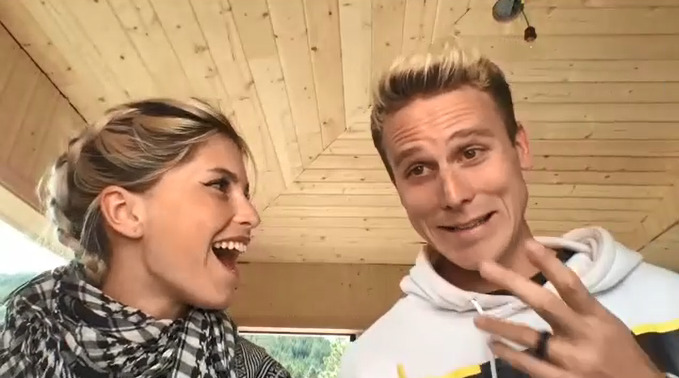 What do pizza, dodgeball, trampolines and Christianity have in common? You’ll just have to find out by watching Trampolines’ first ever interview!

Trampolines is the new Christian EDM/Hip-Hop/Pop band whose focus is on missions and charity…and worshipping Jesus over mad synths and phat beats. Made up of husband and wife duo Lane and Cary, better known by their stage names Lancifer and OhFrikk, Trampolines have so far breathed new life into Cory Asbury’s Reckless Love and Hillsong’s Hosanna. Now, they’re getting ready to release their debut single Meet Me Where I’m At tomorrow and we’re honored they chose us to introduce them to the world.

Watch our interview below to find out all about their amazing hearts, the role churches in China & preaching in trampoline parks played in the formation of the band, fire breathing, an all age youth group and the answer to the question above.

Oh and there’s a few clips from the music video out tomorrow in there too!

Watch out, Trampolines are about to give some serious bounce to your favorite worship songs and their own original music. And after the pair got married on a trampoline, who knows exactly what to expect from the awesome lunatics!

Get the 2 remixes released so far
Reckless Love | Hosanna

More about Trampolines:
Trampolines is a Christian Edm/Hip-Hop/Pop band that plays festivals and village dance parties alike while traveling the world with a focus on missions and charity. Married couple Lancifer & OhFrikk have made history pushing the envelope from North Korea to North America with black keytars and white turntables, breathing fire and praying for peace in some of the darkest corners of the world.