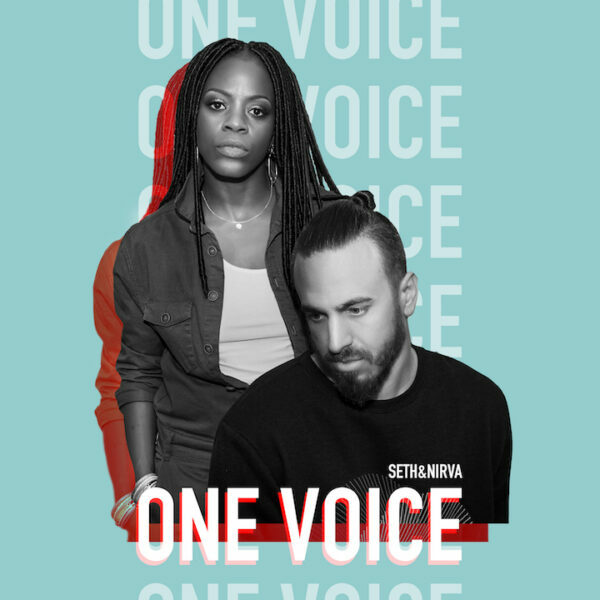 SETH & NIRVA RETURN WITH ‘ONE VOICE’ OF UNITY AND TRUTH

Acclaimed husband/wife duo Seth & Nirva make their long-awaited return March 13 with One Voice, an impassioned 13-track collection of music and spoken-word vignettes. The project showcases the couple at their most vulnerable and most confident, tackling such deeply personal topics as racial reconciliation and apologetics.

Helmed by UK-based songwriter/producer Jimmy James (Matt Redman, Guvna B) and Seth Ready, One Voice features guest turns from Newsboys’ Michael Tait, as well as Mr. Talkbox and Dr. Tony Evans, among others. Opening with the upbeat, synth-driven “Light Up The Sky,” a call to love one another above all, Tait is featured on “Turning Over Tables,” a plea for unity in combatting fear and hate. Additionally, the project includes the poignant “Mercy,” a tender request for the Savior’s grace in the face of pain and injustice.

An excerpt from the teaching of internationally-renowned pastor, broadcaster and author Dr. Tony Evans is among the spoken selections highlighted on One Voice. Titled “Kingdom Over Culture,” the track features Evans’ explanation that racial unity can only be found in Christ. “…Black is only beautiful when it’s biblical, and white is only right when it agrees with Holy writ,” he says.

“As things continue to intensify in our increasingly anti-Christian culture, we in the Church must understand where the real battle lies,” says Seth Ready of the album’s motivation. “We must stand together as one and proclaim the Truth of God in love. This album is meant to call us back to a unity that is founded in Christ and in biblical principles, rather than in the latest waves of political correctness.”

“In a time when our culture is desperately searching for an answer to the divisions we are experiencing, we hope to point people in the only direction where a real solution can be found—the way of Christ,” Nirva Ready says. “Many are calling for human dignity, equality, civility, love, and justice while simultaneously cutting off the roots that are required to sustain these values. The only way forward is by going back and recovering our biblical foundations, which is what we want to communicate through this album.”

Furthering their efforts to combat the decline of biblical literacy, last year the couple, along with Stephen Robles, launched the Freemind Podcast. Addressing cultural hot-button issues from a biblical perspective with an emphasis on apologetics, to date the podcast has featured such esteemed guests as pro-life advocate Abby Johnson; author, speaker and Moody Bible Institute professor Dr. Christopher Yuan; author, speaker and former atheist Mary Jo Sharp; and John Stonestreet, president of the Colson Center for Christian Worldview, among numerous others.

Known for delivering worshipful, vertical songs that blend pop, neo-soul and gospel influences, husband/wife duo Seth & Nirva are each extraordinarily talented artists in their own right. Nirva was a vocalist in TobyMac’s Diverse City Band for over a decade, while Seth served as a backing vocalist for some of Christian music’s leading names, including Kirk Franklin, Chris Tomlin, Donnie McClurkin and CeCe Winans. The duo’s 2014 debut, I Need You—which featured contributions from TobyMac and Mr. Talkbox, among others—was followed by 2016’s critically-acclaimed Never Alone. The latter is highlighted by the racial reconciliation anthem “Brother” (feat. TobyMac), its message continuing to open doors for the couple to sing and speak on the topic at churches and conferences throughout the US and abroad.