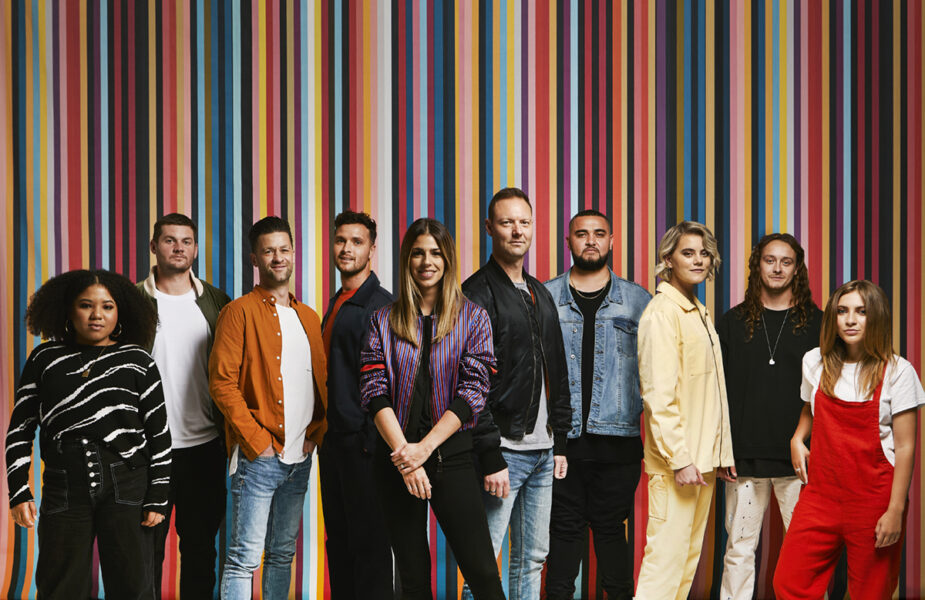 Exclusive: Hillsong Worship on Awakening the Church to new life

Singing about dry bones isn’t a fail-safe way to guarantee a chart-topping album, even for a Grammy Award winning band like Hillsong Worship. So when Aodhan King starts prophesying the words of Ezekiel 37 and Brooke Ligertwood talks about resurrection in the first two songs, you know something significant is happening.

“Awakening is, at its essence, revival; it’s a renewing of the Church and waking the people who have been asleep,” says Creative Director Brooke Ligertwood.

“We’re not just Church when we’re together singing live in a room — we’re Church at all times. God was powerfully working in us as we created every song on this project. He is not finished yet and is calling us all to wake up and lead his revival.”

These sentiments are echoed by Jad Gillies, one of the ten (yes, ten) worship leaders on this record, all spawned from Hillsong expressions like UNITED and Young & Free.

“Even before I knew what the album was going to be called, that was the focus — we really wanted to bring it back to Jesus at the center,” he explains.

“[We wanted to communicate that] we did see ourselves as part of His plan and awaken to the fact that he is alive and that’s for a purpose.”

From the instrumentation that opens the album, to the live tracks attached to the end of this project, Awake takes us on a journey from personal awakening to corporate repentance and unity. It feels appropriate, considering the gravity of the scripture it is based on.

Ezekial 37 is unnerving at best, and at its eeriest, convicting. When God called Ezekiel to proclaim life over the dry bones of the people of Israel, the nation was decrepit. Yet in a supernatural act, Ezekiel sees God rebuild the ruins of His people, attaching skin and bone with tendons before breathing His life into them, and making them a mighty army.

The choice then, to base an entire album on this prophetic message, is bold. And that called for a new sound. It resulted in the collaborative, studio efforts of Awake.

As Hillsong Worship’s first studio recording since 2004, the instrumentation is both sonic and classic, utilising tracks and saxophones.  The musical interlude that opens the record is suitably titled “Dawn,” heralding in the birth of a new era — almost as if C.S. Lewis’s Aslan was on the move in its chords.

“This album was definitely a departure from what we are used to,” says Jad.

“The coolest thing about it is just trying something and seeing if it works. That’s the adventure of it — changing it up a little bit to let some of the guy’s creativity loose and see what happens.”

The phrase “There’s revival in the air,” is nothing new to evangelical Christians. But after seeing it stated by Senior Pastors Brian and Bobbie Houston as the banner for this new album, I begin to feel the rustling of dry bones in my own soul.

“Sometimes revival starts when people actually allow God to change them from the inside out. So we can ask for revival, we can talk about revival, but until we all realise what it will take and that it is individuals and the body of Christ allowing God to change them and to use them, then we won’t see it,” Jad tells me.

This sort of audacious faith weaves its way through Awake. It begins with a personal call to the people of God, and in tracks like “Awake my Soul” and “See The Light” we are challenged to wake from the slumber of our old habits and fully engage with what He has called us to be. It is appropriate then, that this is the story of Hillsong Church in 2019.

“Revival only comes when you actually make steps towards it and you give God the keys to do what he wants,” says Jad.

“That’s been the story of our church this year, and we’ve seen lots of fruit from it.”

After the opening tracks invite us to individually awaken from our spiritual slumber, Arise presents us with a new path to repentance and corporate unification.

Lead single “King Of Kings” is an avid reminder of why we pursue life to the full as believers. And new renditions of classic hymns like “From Whom All Blessings Flow (Doxology)” and “He Shall Reign,” remind us of the great cloud of witnesses who paved the way before us.

This dichotomy between the personal and corporate nature of our worship comes together in “Upper Room.” The sound of picking guitars and Taya Guakrodger’s delicate vocals are a formidable force, using the metaphor of the Upper Room where the disciples met after Christ’s death to form a personal prayer of complete surrender — something we are urged to enter into for our own revival.

Yet the very nature of the Upper Room is that it was filled with the most loyal and heartbroken of Christ’s followers — a picture of the early Church, as they were learning what the Kingdom of God truly meant with the coming resurrection.

It is in this analogy that you sense the greater purpose of Awake, because whether it was done purposefully or not, it is an authoritative call for Jesus-followers to come together by the Spirit of God and put to death the division that has long inhibited us.

What Jad says resonates with me. In the last few months, the Evangelical Church has experienced wave after wave of contention due to division— racial inequality has come to the fore thanks to ex-staffers at Relevant Media Group, and now more recently due to Kirk Franklin and his statement after the Dove Awards.

And finally, the way punches have been thrown around after different celebrities or Christians of note have found or lost faith is akin to a boxing match.

So what role does Hillsong Worship, and Awake, have in this? Well, nothing explicitly. But their choice to awake the army of God with praise, first inwardly, and then corporately; shows that some members of the Evangelical Church are ready to step up and address these systemic issues.

We hear it in the powerhouse females, particularly creative director Brooke Ligertwood, who pioneers this album. We see it in Hillsong Worship’s most diverse music team to date, where more than ten individuals of different ages, nationalities and ethnicities reflect the truth that God’s church is for all people, everywhere. And we feel it in the faith that permeates every track of this album. A faith that compels us to exercise our love for God inside the walls of the church, and outside the building where the need is great.

“Often within the Church we [engage with the] cathartic features like worship, and then we forget about the other side of being the Church,” says Jad.

“I love the fact there’s two sides of [being the Church] — there’s the hospital and fellowship side. Then there’s also the, ‘Go out into all the Earth and make disciples’ [side]. We are trying to create opportunities for people to be the hands and feet [of Jesus].”

Hillsong Worship is touring the US this fall. Catch them with Elevation Worship and Casting Crowns now. Dates and tickets available here.