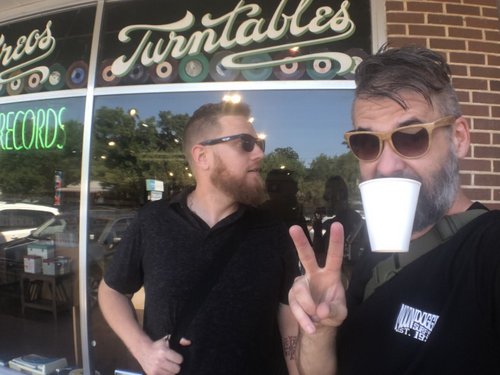 Join Royal Ruckus on a Journey from Darkness to Hope

Seasoned, positive hip-hop group Royal Ruckus returns from hiatus with an all-new EP, Unexpected Joy, a story of a journey from darkness to hope and joy, featuring KJ-52, Knowdaverbs, and Krum.

The artistic duo of Chunjay and Flatline are two-decade veterans of the indie and professional music scenes. After a few years off, Chunjay took the show on tour, playing the AudioFeed Festival in 2017 and 50-something other cities across the country, most lately frequenting intimate venues like breweries, bars, coffee shops, concert halls, and a few churches.

“We always try to have a good time when performing, and draw people into a meaningful experience. We used to play youth groups, now we play more bars. Venues like these make music a full-contact sport—I can look into the audience’s eyes,” said Chunjay.

This closeness with their audience gave birth to an album that tunes into questions that torture the modern mind, such as the quest for meaning and redemption during a time when rates of depression, suicide, and mental illness are increasingly common.

This latest release dives deeply into their Christian rap roots, and features a danceable collaboration with veteran gospel rapper Knowdaverbs and six-time Dove Award winning performer, KJ-52, entitled “I’m Yours Forever (Come On).” The song deals honestly and personally with life’s ongoing struggle to connect with and trust God through its challenges, and is accompanied by a lively lyric video on their YouTube channel.

It’s fitting that the album’s sonic landscape includes vocal samples from Dr. David Bentley Hart, who has written extensively on philosophy of being and the question of God, and Dr. Jordan B. Peterson, whose metaphysical lectures on God and the nature of being have skyrocketed him into international fame and made him an unlikely but undeniable hero with young men (and women) all over the world.