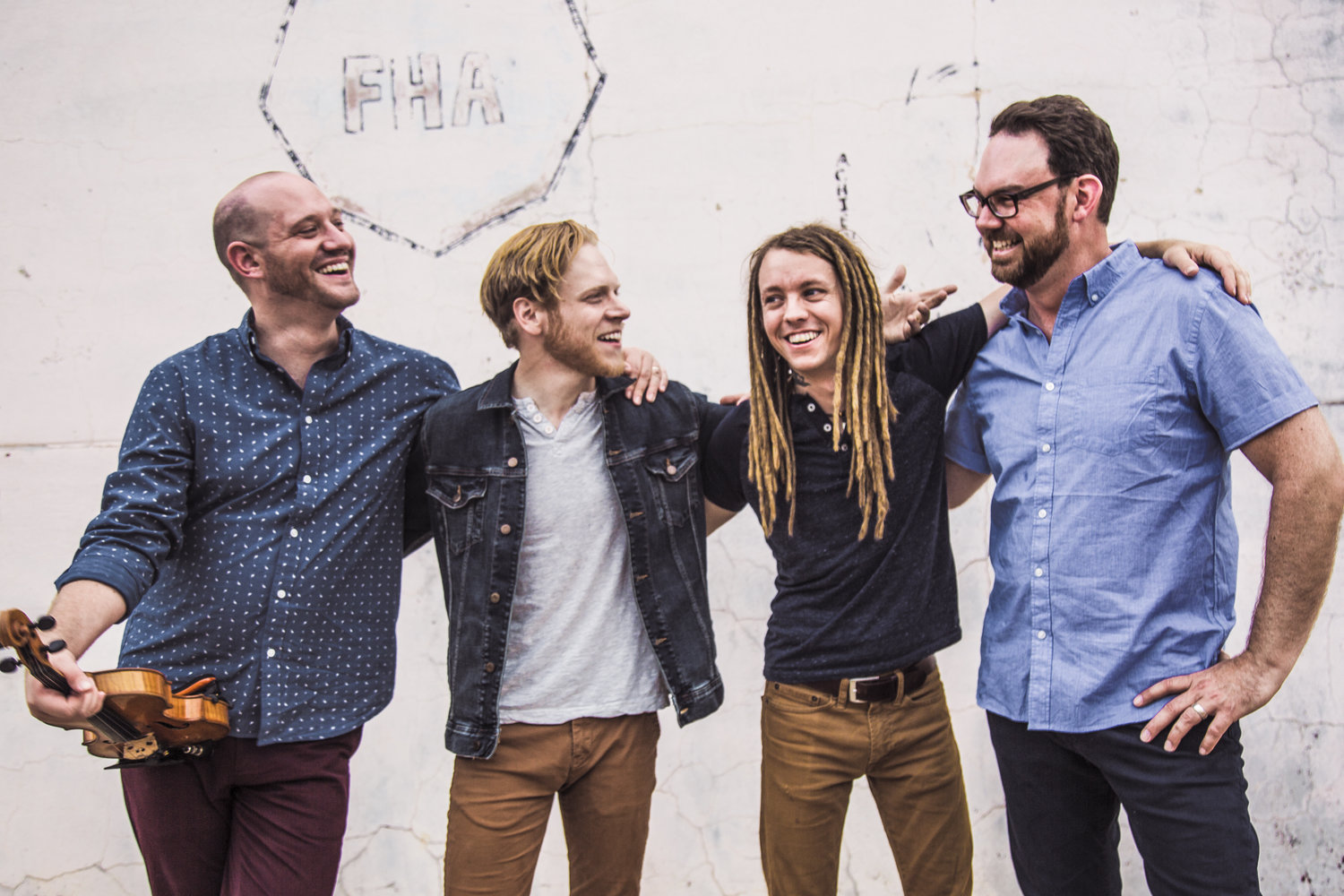 You can’t quite define Matthew Bell & The Next of Kin. The north Texas folk/soul band bring a lot to the table with their debut album, Hear The Sunrise: impressive musicality, enough soul to remind you of Motown greats, and the tenacity to wrestle with concepts we oft ignore.

Upon dropping their lead single, “Thirsty,” it was clear this quartet were bringing something of quality to CCM. The toe-tapping, driving folk song sticks in your head for days, drawing comparisons to The Avette Brothers and Rend Collective.

Lead singer Matthew Bell has a quality to his voice that reminds you of One Republic’s Ryan Tedder, and fellow band members (and brothers in law) are equally as memorable.

Jarod Schmitt creates an atmosphere through his mandolin that transcends your earphones, and Daren Denniston is unbelievable on Violin. Add in Ben Dobberstein, Cameron Crowley and the band’s ability to make the words of Jesus sound almost…hipster (a beard and guitar will do that), and they were locked in as the next big thing in Alternative Christian folk.

It left us expecting a debut rich in folky pop sounds, but upon listening to this ten-track collection you realise there is a lot more to this band than we initially thought.  Rhythm. Blues. Celtic nuances. Swinging Memphis tones; and the ability to embrace the darkness of life and communicate an infallible hope.

“All Eyes on The King,” is a surprising opener. You are transported to a swinging blues club, and the brothers combine the sounds of a choir with a quirky base line and strings. For a song about keeping our focus on Christ (undoubtedly a popular theme in CCM), you’ve never heard anything like this before. It’s almost like they have created a niche solely for their unique sound. You start to get your head around it, and then “What D’Ya Say?” plays, and they mess with your head all over again.

The alternative pop sounds of Matthew’s voice are met by the warmth of piano, and then they introduce a brass section and you realise this band are undefinable. There is sweetness to this love song that reminds you of the innocence of first love. Their ability to capture the ‘honeymoon’ period of a marriage and retain this through the rest of the album is pretty remarkable, as they hold tightly to the commitment of marriage through lyrics about conflict, being home sick, and vulnerability.

“Rocking Horse” keeps a slightly more commercial sound on opening, showing us that simple vocals over acoustic guitar is enough to provide them with a radio hit. Naturally, the song transcends this and turns into a lullaby come jazz breakdown — and at one point I’m sure I heard a salsa beat in there. One thing is for sure, you can’t deny the band’s delivery or appreciation for musical history.

Follow up single “Enough,” returns to the theme of marriage, as the brothers communicate the fullness of life found in their wives. This track beautifully harks back to the folk sounds of their lead single, showing that they have what it takes to be the Mumford and Sons of CCM. A little falsetto, mixed with tender strings and grounding piano makes this one of the most radio friendly tracks of the album.

Ok, so we’ve established that Matthew Bell & The Next of Kin are folk/bluesy musical geniuses, right? Enter the second half of their debut, and the realisation that they can sing soul like nobody’s business.

“She Calls” has a guitar line that carries the depth of John Mayer, and then Matt sings. And can this man sing. A swinging, soul-infused and layered song, it sounds like it has been recorded in Memphis circa the 1973. The words of Wisdom found in Proverbs are delivered with passion, and the intensity of the song continues to rise, until you are begging Matt to take it up a key and blow your mind in the last minute. It doesn’t happen, but that could be because “Get It Together” follows.

Without a doubt, “Get It Together” is equally the best track on the album with “Thirsty”. The most Motown like of all the tracks on this record, the timbre of Matt’s voice is perfect for the rich tones and vocal tricks of the genre, and the ingenuity of the instrumentation reinforces the musical integrity of this band. A call to truly love others irrespective of our differences, this song could be the runway that set the brothers up in CCM. There is no one else in the genre making music like this. And they do it well.

Folk. Blues. Motown. A little pop. Ok, so the brothers have covered all bases, right? Wrong. Because “The Fall,” ushers in a near-Celtic vibe, communicating the story of Genesis Chapters 1-5 with symbolism and poetry. These are some of the strongest lyrics on the album, and the combination of Celtic/folk sounds harkens to Christian Music’s golden days when Keith Green was with us.

Title track, “Hear the Sunrise,” is a song full of maturity and insight, discussing the importance of honest conversation through conflict. A truly beautiful blues track that has tinges of Motown tones, it is complex and articulate. I could have listened to an entire album filled with songs like this.

“I Need You” is a notable track because it shows a vulnerable masculinity we rarely see in Christian music or western culture. The utterance and desperation of the love song communicates what it means to surrender your pride for another. It is truly a song about long-term commitment or marriage, rather than just puppy love.

Finishing up with “Thirsty,” and we’re left on a high. These ten tracks are like a buffet at a family reunion — full of rich flavours, plenty of options, and conversation that will warm your heart. To find distinctive commercial success, the Next of Kin may need to specialise in one genre. And this debut shows they have the capacity to grow and dominate in the folk, soul or blues arenas.

In the mean time; world, meet Matthew Bell & The Next of Kin. If this is a tasting plate of what’s next, then I can’t wait to hear more music. Because this group has more than unbelievable musicality and catchy hooks, they have heart. Welcome to the family indeed.