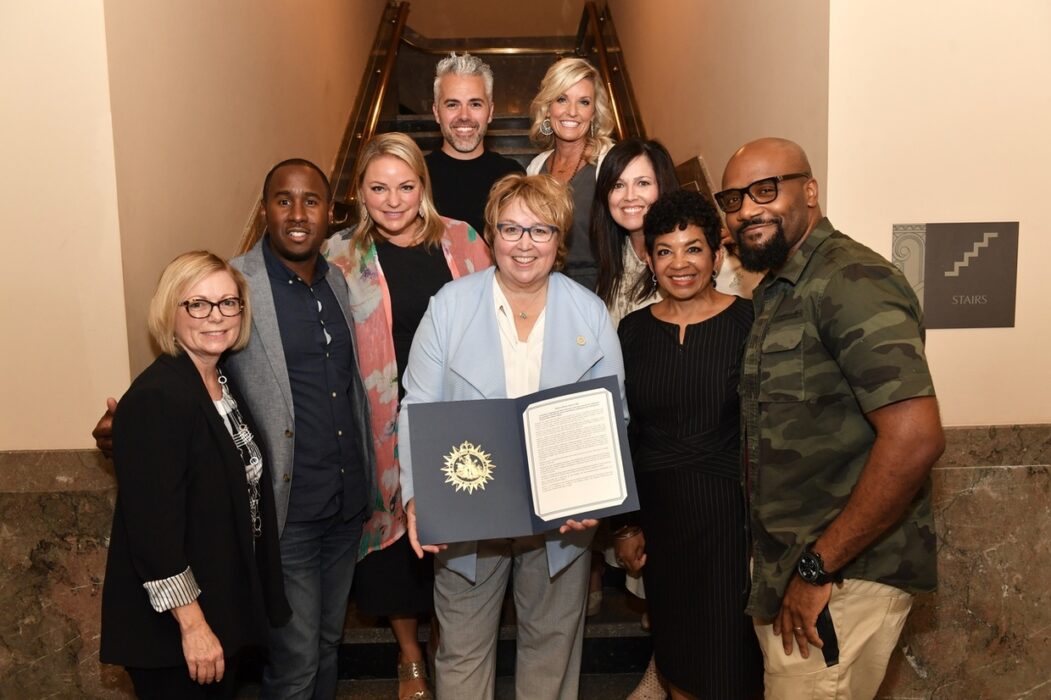 The Nashville Metropolitan Historical Commission, in association with the Nashville Metro Council, announced today the creation of a historical marker at 1000 16th Avenue South to be unveiled on Thursday, July 25th, to honor decades of the music impact of Belmont Church, Koinonia Coffeehouse and the Contemporary Christian Music (CCM) genre on the city of Nashville. Additionally, at today’s Nashville Metropolitan Council meeting, a resolution was read celebrating 50 years of the Gospel Music Association (GMA)’s Dove Awards and thanking the trade organization for collaborating with three major CCM record companies to fund the historical marker.

The Metro Council meeting began the invocation with a reading of the resolution by its co-sponsors followed by a hymn performed by the Dove Award-winning, Point of Grace. The historical marker unveiling ceremony, to be attended by some of the original artists involved with Koinonia and Belmont, will take place Thursday, July 25th at 10:00a on the corner of 16th Avenue South and Grand Avenue. This location is at the heart of what is known as Nashville’s famous “Music Row”. The event is free and open to the public. On Saturday, July 27th, a concert of celebration featuring artists and songs from the celebrated era will be held at the Koinonia Coffeehouse (1000 16th Avenue South). The concert is open to the public on a first come basis until capacity.

“Gospel and Contemporary Christian Music have played a big, but sometimes unsung, role in Nashville’s creative evolution and in our being known worldwide as Music City,” Nashville Mayor David Briley said. “It’s fitting that we honor the impact these musicians, singers, songwriters, producers, engineers and others have had on listeners around the world.”

“I moved my CCM marketing agency to Nashville in 1986 because of the growing impact of this music and by the 1990’s, Contemporary Christian and Gospel Music were outselling jazz and classical according to the RIAA,” explains council member Nancy VanReece (District 8) who spearheaded efforts for the marker and resolution. “Nashville has truly become the capital of this genre and I am pleased to have collaborated with Council member O’Connell to see the marker realized on Music Row…where it belongs.”

“Religious music has been integral to Nashville’s identity as “Music City,” from pioneering faith-based music publishing houses to the international impact of the Fisk Jubilee Singers,” adds Freddie O’Connell, council member for District 19 where the marker is located. “Koinonia became a destination where young talent such as like Amy Grant and Michael W. Smith — now multi-Grammy and Dove Award winners — shared their first songs.”

“The Gospel Music Association is thankful for our colleagues at Curb/Word, Capital Christian Music Group, and Provident Music Group for their financial support for the historical marker and dedication to serving our community in this way,” comments GMA President & Executive Director, Jackie Patillo. “We are also honored to receive the resolution from the Metro Council, on behalf of the CCM and Gospel industry based here, which honors the 50th year of the Dove Awards and we want to urge the community to consider attending the awards on October 15th at Lipscomb’s Allen Arena.”

The timing of this historical marker installation has been elevated as Music Row is now on the list of most endangered historical landmarks by The National Trust for Historic Preservation (announced 5/30/19). You can read more about it here: https://www.tennessean.com/story/money/2019/05/30/music-row-nashville-endangered-historic-landmark/1277751001/

Other Metro historical markers have been created to honor well known locations such as Ryman Auditorium, Holy Trinity Episcopal Church and Belmont Mansion (located just down 16th Ave South from Koinonia and Belmont Church) or markers are based on events such as the Battle of Nashville or the East Nashville Fire. Some markers honor its most famous leaders and creative people such as Revolutionary War General Thomas Overton, dancer Albertine Walker, and Poet Laureate Randall Jarrell. The new historical marker at 16th and Grand for Contemporary Christian Music, Belmont Church and Koinonia Coffeehouse combines historic sites, key events and highlights a few select creative individuals who contributed richly to the fabric of this brand of music in Music City.

About Gospel Music Association & Foundation:
Founded in 1964, the Gospel Music Association serves as the face and voice for the Gospel/Christian music community and is dedicated to exposing, promoting and celebrating the Gospel through music of all styles. The GMA produces the GMA Dove Awards, The GMA Hall of Fame Induction and Honors Ceremony and the IMMERSE Conference. For more on supporting the GMA or becoming a member, please visit www.gospelmusic.org.    Metropolitan Historical Commission:
Created in 1966, the Metropolitan Historical Commission is a municipal historic preservation agency working to document history, save and reuse buildings, and make the public more aware of the necessity and advantages of preservation in Nashville and Davidson County, Tennessee. The commission consists of fifteen Davidson County residents appointed by the mayor. In 1967, the Metro Historical Commission initiated a historical marker program to commemorate significant people, places, and events in the city’s past. Marker Number One, “Heaton’s Station,” was erected at Lock One Road in 1968. The marker program is now one of the Historical Commission’s longest-running and most successful programs, with over 200 markers across the county. For more information about the Historical Markers program, visit http://www.nashville.gov/Historical-Commission/Services/Historical-Markers.aspx.