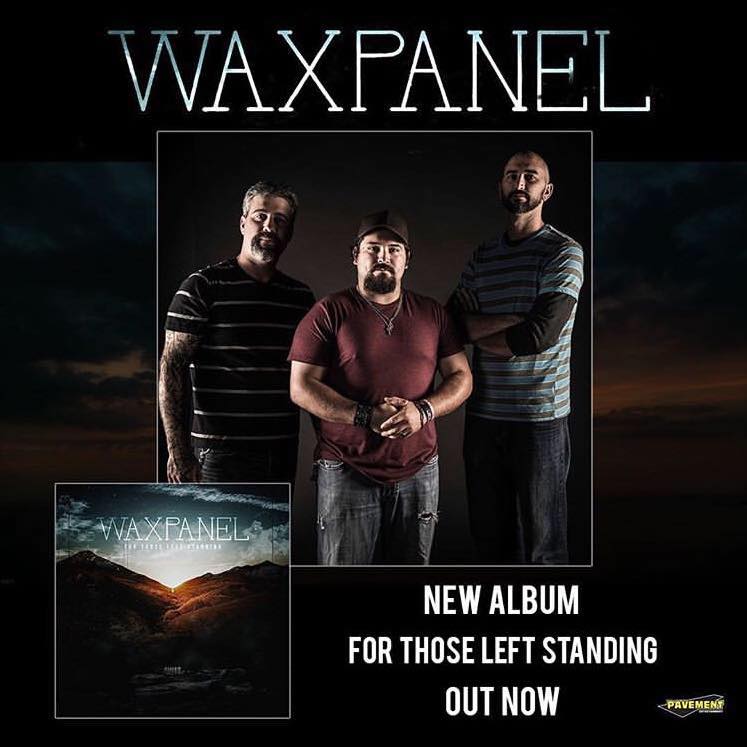 Introducing our new interview series Take 10, 10 questions with musicians which will Take you less than 10 minutes to read & check out 1 of their songs. Kicking things off we have Micah Lindner of the band WAXPANEL who released their new album For Those Left Standing a few weeks ago.

Where are you from? And how did you become a Christian?

I’m from San Antonio Texas, and that’s where WAXPANEL is based out of. I was raised in a Christian family, and I got baptized at an early age. Once I became a teenager, and had a better understanding of the Gospel, I got baptized for a second time. The greatest thing my parents ever did for me, was to teach me about Jesus. Proverbs 22:6 says, “Train up a child in the way he should go; even when he is old he will not depart from it. I’ve seen this come true in my own life.

When did you know you were called to be a musician?

I started playing music when I was only eight years old. By the time I was fifteen, I knew that I wanted to pursue music for the rest of my life. I’ve been in bands ever since. I went into radio broadcasting for a bit, and attended college for a music education degree. Music has always been a part of my life. I can’t imagine not having band rehearsals, playing shows, planning out the next step for WAXPANEL, and so much more. I believe God gave me my musical talents, and so I’m giving them back to Him. I believe I was designed to spread the Gospel. Music is one available avenue that I have to use for that purpose.

So why WAXPANEL? Where did that name come from?

I started WAXPANEL in 2008. I knew that I wanted to pursue grunge/alternative style music, and I needed a band name. I used to work for a car part supplier, and I was bored at work one day. I was flipping through the paint supplies section of our company magazine, and the words “Wax” and “Panel” jumped out at me on the page. They were the first two words that had come into focus initially. I put them on my list of band names. My buddy Travis liked the name, and he suggested I put it into all caps, and ran it together in one word. It goes with the theme of 90’s bands like Silverchair and Soundgarden.

Why did you call your new album For Those left Standing?

Our debut album features music recorded over the past five years. The songs were recorded in multiple studios, and even features band members no longer with us. I’ve played with many musicians in WAXPANEL, since we began 11 years ago. The name came to me over a year ago. I knew that when we eventually finished this project, that we should dedicate it “for those left standing” in WAXPANEL. The artwork features former band members standing on a cliff. The band continued on through adversity, and is crossing over into a bright new chapter together. If you look closely in the artwork, you’ll see four beams of light, that are supposed to represent the band members. We’ve lost a guitarist since then, but are currently auditioning his replacement. There were so many obstacles we had to overcome just to get this music released to the public!

What song on the album means the most to you and why?

That would be the song “My Life For You.” It’s the first song I’ve written, straight up about Jesus without ambiguity. I sent our music to Christian record labels for three years, before we got signed to Pavement Entertainment. The critique I frequently heard, was that we didn’t have a strong enough message for Jesus Christ. I had also been convicted about this as well. One day I said “God I want to write unashamed music for you.” I heard a clear voice say “then just do it.” So I picked up my pen, and started writing. The first verse is vague, just like many of the other songs. I then got to the chorus, and started writing the word “Jesus.” I then heard the voice say “continue.” I then wrote “My God, My Salvation.” I then started to cry. I then wrote, “these tears, my life is for you.” I then clearly heard the voice say “stop….that’s all you need to write.” John 10:27-30 says “My sheep hear my voice, and I know them, and they follow me. I give them eternal life, and they will never perish, and no one will snatch them out of my hand. My Father, who has given them to me, is greater than all, and no one will snatch them out of the Father’s hand. I and the Father are one.”  I believe that God talked me through that song. He’s done so with several other tunes since then.

“The Chronicles Of Captain Sea Biscuits” might be my favorite named track for a while, tell us about that song!

I continue to find it hilarious that this track keeps popping up in interviews! We had the idea to put some “musical transition pieces” on the album. That one made the cut, and we decided to give it a track title, instead of sneaking it in there. The song features my eight year old son Barrett, in his debut in the recording studio. There’s been talks of continuing something like this in the future now. We all have kids, and it would be cool to get them somewhat involved. We all make big sacrifices away from them to be able to continue this music ministry. It’s a snap shot in time that we can enjoy for the rest of our lives.

Who would be your dream artist to do a show with?

It already came true for me with one artist, so I’ll just focus on that. We were blessed to open for Sleeping Giant one time. It’s something that I’ll never forget, and Tommy Green gave me life changing advice. He told me “Micah, people need to see Jesus in you. It needs to be real. They can smell a fake a mile away.” He prayed with me, and his words washed away many years of scar tissue. I loved seeing the passion in his eyes when he performed. It inspired me to stop worrying about everything else, to give God all the Glory, and to turn WAXPANEL into a music ministry. I want the music God gives us, to change people’s lives for God’s Kingdom.

What bible verse is speaking to you the most right now?

John 6:37-40 says… “All that the Father gives me will come to me, and whoever comes to me I will never cast out. For I have come down from heaven, not to do my own will but the will of him who sent me. And this is the will of him who sent me, that I should lose nothing of all that he has given me, but raise it up on the last day. For this is the will of the Father, that everyone who looks on the Son and believes in him should have eternal life,  and I will raise him up on the last day.” These verses speak so much to me. I used to believe for years, that it was possible for me to lose my salvation. I no longer believe that is possible.

What can our readers be praying for WAXPANEL about over the coming months?

Pray that we never waiver, and that we continue to boldly proclaim the Gospel of Jesus Christ. Pray that God continues to open doors, that we submit to His will, and that souls are saved for His kingdom.

Is there anything else you’d like to say to our readers?

We believe that Jesus Christ is the only way to heaven. We use the music God has given us, to spread His Gospel. We want you to reach out to us, and let us know how we can pray for you. Contact us on our social media sites. The music is secondary, and we want to get to know you. God bless you all, and we appreciate your love, prayers, and your support! “It’s only the Beginning!”

Listen to My Life For You off the album here.

Find out more about the band in our article here.

Buy For Those Left Standing