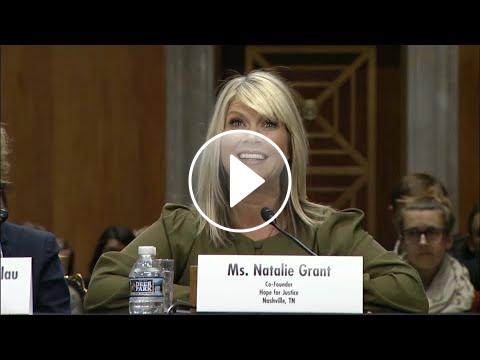 U.S. Senator Bob Corker (R- Tenn.) invited the multi-platinum, award winning singer, wife, and mother of three daughters, Natalie Grant, to testify at a senate hearing on progress in the global fight to end modern day slavery.  She appeared as a witness in the hearing as the co-founder of the non-profit organization Hope For Justice, and shared her compelling and heart-felt testimony before the Senate Committee on Foreign Relations.  Her full testimony can be seen below.

Grant’s compassionate and convincing testimony came straight from the heart. It is her mission to use her platform as a public figure to shine a light on the more than 20 million trapped in modern day slavery.  Fourteen years ago, Grant was watching a drama series on television that literally changed her life.  An episode of Law & Order featured the subject matter of human trafficking and it propelled Grant into action.  Fast forward to 2018,  and Hope For Justice, which helped over 37,000 children last year alone, has grown to include 22 locations with 8 offices spanning 4 continents, and is making true impact in the global fight.

During her testimony Grant recognized that she does have the power of a voice and said, ”It’s not up to us to do everything. But every one of us must do something.”  She recognized that this issue demands her attention and commitment, and she challenged the Senate Committee by declaring it  also demands the same from them.  Grant said, “I commit my life to Proverbs 31:8 which says, ‘Speak up for those who cannot speak up for themselves. Ensure justice for those being crushed.’  I have seen those who are crushed, and I say that together we must do whatever it takes to give them justice.”

In 2015, Corker proposed a bold, bi-partisan initiative to end modern slavery worldwide that became law in 2016, and now operates as the Global Fund to End Modern Slavery (GFEMS).