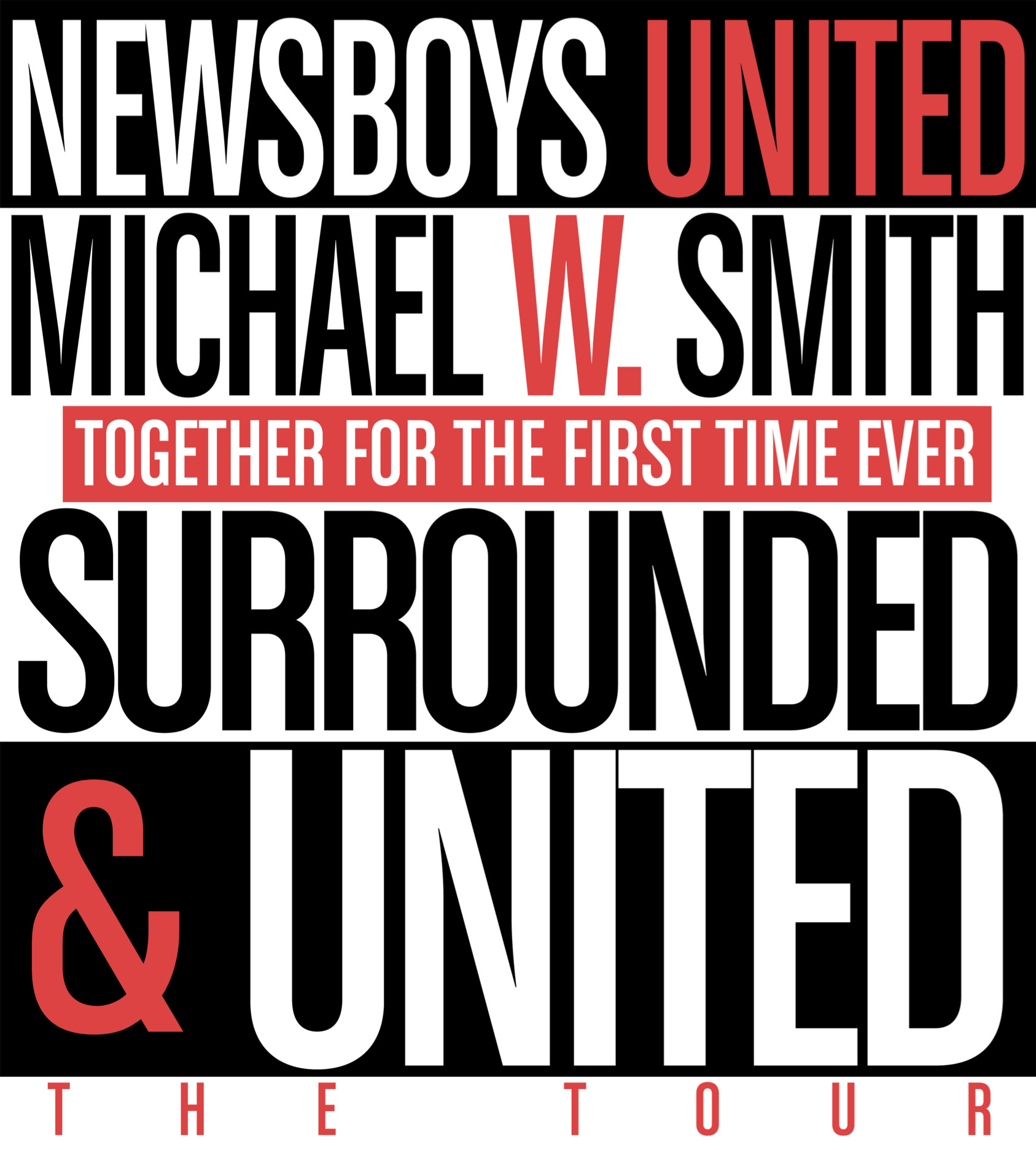 Christian music supergroup Newsboys United and multi-Platinum®, multi-GRAMMY®-winning singer/songwriter Michael W. Smith are set to make history this spring, joining forces for the first time ever for “Surrounded & United: The Tour.” The 10-city outing will be a night of worship, featuring hits spanning both artists’ unparalleled careers.

“We’re so excited to join our friend Michael W. Smith on the road next spring,” said Newsboys’ Michael Tait. “Over the years worship has become central to both our identities as artists, so having the chance to worship together will be such a special experience.”

“I’ve been friends with the guys in Newsboys for years, but for whatever reason, we’ve never had the opportunity to tour together,” Smith says. “The time finally seems right, and I’m really looking forward to this—great guys, great music, great worship. This is going to be fun!”

Newsboys United is comprised of Michael Tait, Duncan Phillips, Jeff Frankenstein and Jody Davis, along with former members Peter Furler and Phil Joel. By the end of 2018, the supergroup will have performed 100 shows around the country since reuniting earlier this year. Beginning in January, Newsboys United will headline the multi-artist Winter Jam 2019 Tour Spectacular—Christian music’s largest annual tour and one of the biggest first quarter outings in the world.

Among the most influential bands in Christian music history, Newsboys have sold more than 10 million units, amassed eight Gold® certifications, 33 #1 radio hits, four GRAMMY® nominations, two American Music Award nominations and multiple Dove Awards. Since their formation in Australia three decade sago, Newsboys have released 23 recordings and their signature songs include “We Believe,” “He Reigns,” “Miracles,” “Born Again” and the Platinum®-certified mega hit, “God’s Not Dead.” The latter inspired one of the most popular Christian film franchises of all time.

Michael W. Smith has been releasing new music regularly and performing around the world to sold-out crowds for the last 30+ years. During his storied career, he’s written 32 #1 singles, been honored with three GRAMMY® Awards and 45 Dove Awards, was inducted into the Gospel Music Hall of Fame and has sold more than 15 million albums. His most recent USA Today, Yahoo! Music and Billboard-acclaimed studio album A Million Lights and Parade, Good Morning America-featured live worship album Surrounded have together become his 30th and 31st Top 10 hits on Billboard‘s Top Christian Albums chart,more than any other solo artist in history. He’s also given back to the global community. Smith has raised funds to battle AIDS in Africa; started Rocketown, a safe haven for young people in Tennessee to meet and find hope;and has helped more than 70,000 children through Compassion International. Hehas also written several bestselling books, including Old Enough To Know and Friends Are Friends Forever.