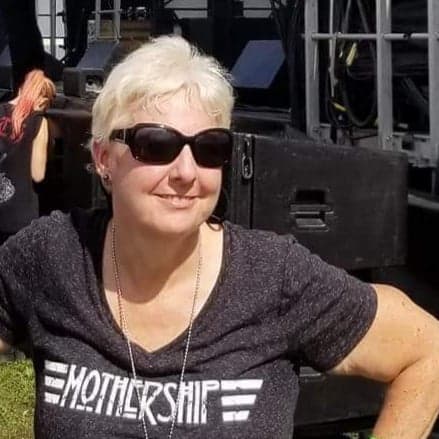 An Interview with Mothership

If you attend many concerts/festivals or you’re a part of the inner Christian rock/metal circles chances are you’ll not only know who Mothership (aka Cindy Blankenship) is but love her too. There are few people I know of who unselfishly support bands as much, or with as much heart, as she does. I mean, how many other ‘fans’ do you know who have their own merch?! (Keep an eye out for “I’m With Mothership” shirts at festivals etc!)

Cindy will be covering the CVJM Loud and Proud Festival in Germany October 19th & 20th for us. Before she does though, we thought it was about time we interviewed Mothership!

Make sure you’re following us on instagram to catch all the behind the scenes exclusives she’ll be posting – https://www.instagram.com/jesuswired/

If you’re going, look out for her and say hi!

[JW] You’re lovingly referred to by bands and fans alike as Mothership, why ‘mothership’?

[CB] JR Bareis’ (of Love and Death) mother originated the name. Naturally, she was concerned about his health and eating habits as a teenager on the road, so I began taking home cooked meals and healthy snacks on her behalf when they were in town.  After many a care package, she posted a comment about me being his “Mothership,” a clever portmanteau of “mother” and “Blankenship,” that also perfectly encompassed my relationship to the bands I was ministering. The name just stuck.

[JW] What does mothershipping bands entail?

[CB] Mothershipping a band is all about service. For the most part, the bands I minister to are what I call “van bands.” These are the guys and gals sleeping in 15 passenger bands in Walmart parking lots to save money. My goal was to be a home base for these bands that spend so much time away from home.  I have had bands stay at my house to take showers, do laundry, have a place to relax with WiFi before the next show. I have brought food to the venue, delivered snack bags, gift cards, water, toilet paper and wipes, sharpies, van parts, microphone batteries, delivered VIP/All Access badges to the venue that were shipped to my house, taken musicians to the airport, sightseeing, errands, or out to eat.  Whatever I can do to make their stay easier.

I believe they are doing a unique work, which has eternal results. I want to be a part of that. I can’t do what they do, so if I support them and build them up, it gives them encouragement and resources to keep going. To serve the bands is to serve the fans. I also want to clarify; I know I am not the only person doing this. There are lots of us serving bands. I have just been a part of getting the word out, helping people know what to bring and sharing it on social media. “I’m With Mothership” means we have like minds in this ministry of serving musicianaries.

[CB] Whichever one I am serving at the moment.

[CB] There is nothing really that special about it. I started making it because it’s a quick and easy dessert to make. I think it’s funny how it’s become a thing. I tell people it’s been built up so much it must be a let-down to actually eat it. But, people really do seem to like it and I will keep making it.

[JW] So how did you become a Christian?

[CB] When I was 15 my sister, who had just become a believer, began to witness to me. I had a church background, but our family had not been in church for many years. I had embraced relativism, believing there was no absolute truth. She asked me one night if I knew if I died would I go to heaven. I told her you can’t know that. She insisted you could. I was angry she made me confront my comfortable worldview, but within a few weeks I found myself on the spillway of the lake in our apartment complex with a youth minister praying for the Lord to forgive me, give me a new life, and to live his life through me.

[JW] What bible verse means the most to you?

[CB] Galatians 2:20 has always been a favorite.

[JW] When and how did you find and fall in love with Christian music?

[CB] Music has always spoken to me. I think I truly fell in love with Christian music when I began working in a Christian bookstore in the 80’s and had access to all kinds of new music. I also had opportunity to begin meeting artists at that time, which was a stepping stone to the ministry I have now. Music speaks to my soul when nothing else does.

[JW] Who’s in your top 5 favorite artists of all time?

[CB] Not an easy question, since my musical tastes have evolved a lot in 58 years. If we are talking artists with a Christian worldview, some bands that have impacted me for a decade or more are Red, Demon Hunter, Skillet, Decyfer Down, DC Talk, and Petra.

[CB] The rock/metal genre is my sweet spot. With that said, The Protest’s album “Legacy” is at the top of the list for this year so far, with a new one, Zahna’s “Red For War” right behind. I am also looking forward to Set For The Fall and Fight the Fury releases coming out before the end of the year.  I really don’t have a favorite all time album. As I have said previously, my tastes have changed a lot over the years. Right now I can say that Skillet’s “Collide” and “Comatose”, Red’s “Innocence and Instinct”, Demon Hunter’s “True Defiance”, Decyfer Down’s “Crash”, are some classics I still revisit.

[JW] Out of all the many bands you’ve seen live, which band has the best live show?

[CB] Skillet, Red, August Burns Red, TobyMac, Casting Crowns, for KING & COUNTRY, are a few that have really big productions that are fantastic. Some of my favorite shows haven’t always “big” productions. Sometimes it’s the intimacy, musicality, or passionate intensity of the band that make it a fantastic live show. I have been to many of these kinds of shows so I can’t pick just one.

[JW] Which 3 new bands do you think have the most potential?

[CB] A few fairly new underrated bands with potential are Glasslands, Earth Groans, Death Therapy, and look out for Zahna taking off in the secular and Christian market. Actually, all of the bands on the newly formed label Rockfest Records are bands to watch. Some have been around a few years, but with this new label will begin reaching a much larger audience. (Zahna; Random Hero; Gold Frankincense and Myrrh; The Protest; The Persuaded; and Amongst the Giants.)

[JW] You’re going to be covering the CVJM Loud & Proud festival in Germany in a couple of weeks for us, is this your first time to Germany?

[CB] No it’s not. I went to Germany in 1977, for a month long foreign exchange program with my German class in high school. It was a beautiful country and such an amazing trip. I have always wanted to go back.

[JW] How did you get involved with the festival?

[CB] I had several friends on Facebook from Germany and saw posts from them and artists about Loud and Proud. I eventually came in contact with the organizers online. My connections with so many artists, aided me in becoming a liaison to help them reach out to some of them and they asked if I would come over this year and see the festival first hand.

[JW] We know we’re awesome and all, but what made you want to cover it for us?

[CB] Iain Moss and Jesus Wired have been friends on social media for a while. I was hoping, since Iain lives in the UK, he was going to be there and we would finally meet. When I found out he wasn’t going to be there, I offered to help with covering Loud and Proud myself.

[JW] If there was one piece of advice you could pass on to the younger generation of fans about how best to support your favorite bands, what would it be? (other than buying their music/merch…)

[CB] Be sure you share with them what their music has meant to you. Tell them your stories. One good way to do that is to write it down and put it in their tip/gas jar on their merch table. It really encourages them. If you can do something extra financially, put money in the tip jar, or even a $5 gift cart for coffee means a lot to them. Support them on social media by sharing too.

[JW] What can our readers be praying about for you?

[CB] For the festival, please pray about those traveling, the opportunity to change some lives, and for the Lord to get all of the glory.

For me specifically, I am concerned about traveling with my spine injury/structural issue that causes chronic pain. Also, my husband and I are praying for direction with the Mothership ministry as possibly becoming something even more a part of our lives. God has been opening so many doors and we are excited to see where it will lead.

Make sure you’re following us on instagram to catch all the behind the scenes exclusives she’ll be posting – https://www.instagram.com/jesuswired/

If you’re going, look out for her and say hi!