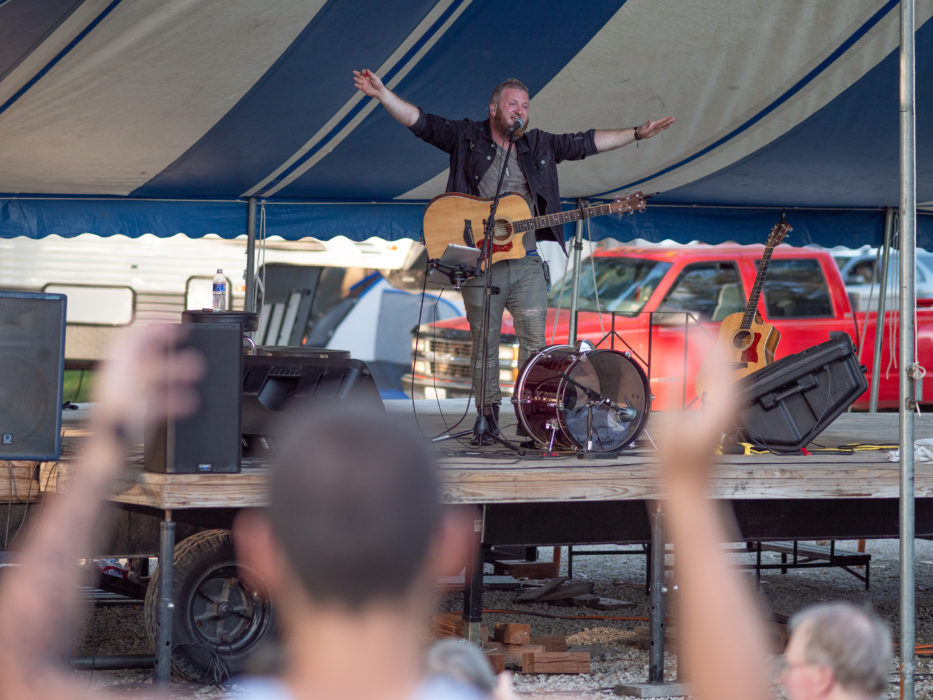 Keeping It Real – On and Off Stage

This Summer has been an exciting time seeing so many new artists across the country. There’s a great crop of growing talent in the independent music artists scene.  But lately I have noticed a disturbing trend amongst independent and signed Christian artists. As song writers and Christians first and foremost we want to be real with people. We want who we are as people and performers to be real on and off stage minus a made-up persona or character. If we’re keeping it real off stage then why are we faking it on stage.

Before I proceed I want to clarify, solo artists who don’t have the funds to hire a live band, you’re getting a pass on this. I am not talking about a string accompaniment, horns, keyboard parts or a funky loop that enhances the song. I am not talking about sampling a bass track if your bassist can’t make a show. You aren’t whom I am referring but rather bands faking their live performances to sound just like the studio album.

Using tracks in a live performance is not unheard of and fairly common. With the advancement of technology its easier for more artists to use them. Lately at several live performances I heard vocal harmonies without seeing someone singing backup. I saw guitarists playing air guitar to guitar parts they weren’t playing. It was entertaining to see these musicians running to the microphone to lip sync a harmony that they missed or playing off a guitar part that they weren’t actually performing. I see bass amps on stage and bass is coming from somewhere, but no bass player. Straight up…it’s faking it.

The music industry’s memory can’t be that short. Let’s roll back the clock 20 years to 1988 when everyone was talking about a hot new R&B duo named Milli Vanilli. Two years later it comes out that they were lip syncing their entire performance, even at the Grammys. That incident spawned a series of changes to live performance requirements at the Grammys. From my perspective, the industry isn’t there yet but we’re dancing closely to the edge of it again.

The illusion of live performance was revealed again at a Super Bowl performance in 2014. Red Hot Chili Peppers’ bassist, Flea, let the cat out of the bag when it was shown his bass wasn’t even plugged in, even with a wireless. When the photos hit the internet it caused an uproar. Though the vocals were performed live, the bass, drums and guitars were prerecorded. Flea admitted there was no need to plug in and they weren’t trying to fool anyone. The viewers’ reaction to this revelation shows a clear lack of understanding the logistical undertaking to make a live performance happen, especially one of that scale.

The predominant cause and justification for using tracks is no doubt money. But musicians and industry professionals must stop using money as a crutch for taking short cuts. I would go as far as to say this is why we have such terrible music jamming up the airwaves. Though programs like ProTools and Autotune may help save time and money (and thank God for them) fixing studio performances but it also allows people with no talent to get in the industry. We supplanted talent for convenience, consistency and safety.

There is no substitute for talent. E.g. at Nehemiah Fest in Kansas City, MO this September, I watched independent Christian music artist Joe Guerra overcome technical difficulty with talent. Joe is one of those solo artists I previously mentioned. On the stage Joe was performing they couldn’t get his backing tracks to play. Like the talented artist he is, he asked for a kick drum and he plowed forward. He sang, played his acoustic guitar and beat that kick drum to hammer out a most impressive performance. In that one technical mishap, he made a fan with his determination and talent.

That’s the beauty of live performance! You never know what’s going to happen. Mistakes are made, things go wrong and it’s real. Those are the things you take with you from the performance that make them memorable. If you are a talented stage performer you can take those moments and turn them into live gems.

But no, it seems the trend is plodding along with the same canned performance night after night playing along with tracks. Again, I am not saying don’t use tracks. By all means, use all the tools you can. What I am saying is if you are using tracks, make sure that they are just an enhancement and not the basis of your performance. Creating a memorable live performance takes a great deal of thought and work. Hundreds of hours of rehearsal can go into making an hour-long set. The audience will appreciate it but once the man behind the curtain is revealed consumer confidence is lost.

No doubt my words will probably be met with much resistance. Performing with tracks is the new norm for a lot of musicians and has allowed many beloved artists to stay on tour longer than they should have. In our narcissistic society having the humility to know when it’s time to exit stage left is rare. Milking your integrity to gain the almighty dollar will continue until audiences catch on that they aren’t getting what they are paying for…a live performance. But I could be wrong, but that’s my perspective from the bottom end.