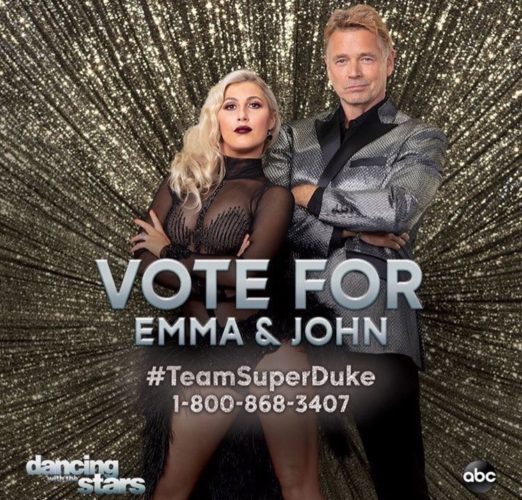 Actor and country music hit maker John Schneider is partnered with pro dancer Emma Slater on Season 27 of ABC’s Dancing with the Stars. Team SuperDuke, an homage to Schneider’s iconic roles in the Superman-themed Smallville and The Dukes of Hazzard, will compete for the Mirror Ball Trophy starting with the 2-night season premiere on September 24 & 25.

“I want to check this off my bucket list,” Schneider told ACCESS following the cast announcement earlier this month. “I want to be proud of what we do. I have a great appreciation for dance and look forward to Dancing with the Stars with Emma.“

Schneider is best known for the iconic role of “Bo Duke” on The Dukes of Hazzard, as well as CW’s Smallville and his current series, Tyler Perry’s The Haves and the Have Nots on OWN. In addition to his extensive acting career, John is a celebrated country music artist with 10 albums to his credits and 4 #1 singles on the Billboard Country chart.

This year, Schneider has launched an ambitious 52-song project, The Odyssey, releasing a song a week throughout 2018. With famed drummer/producer Paul Leim at the helm, he has recorded over 4 dozen all new songs with the help of esteemed songwriters like Paul Overstreet, Chuck Cannon, Keith Stegall, Jenee Fleenor, Mac Davis, Kyle Jacobs and Bill Anderson, to name a few. In addition, Schneider’s Greatest Hits…Still is set for release in November.

Be the first to get news and updates about John Schneider’s experience on Dancing with the Starsand have exclusive behind the scenes access! Sign up here: https://johnschneiderstudios.com/DWTS