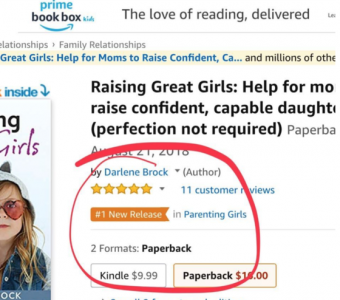 Amazon has distinguished Darlene Brock’s how-to, Raising Great Girls, as the No. 1 New Release for Parenting Girls. Raising Great Girls dives into the many roles of motherhood while offering a relatable and digestible resource. Alongside the release of the book, Brock is daily speaking into the lives to thousands of women in 74 countries through her creation, The Grit & Grace Project.

From two decades of leadership in the music business to fostering a safe community for women known as The Grit & Grace Project, Brock draws from the reality of raising two daughters while working, traveling and juggling the impossible equilibrium of life. With humor and insight, she unpacks the critical impact moms have on their daughters, the jobs we all juggle and how to tackle and master them: Coach, Creative Counselor, Time Manager, Academic Advocate, Professor of Gender Studies, Relationship Counselor, Sex Ed Teacher, Communications Specialist and more. Demand prompted Brock to add three chapters just for dads, covering the key roles of a father that every mom can hand over to her man: Master Gemologist, Stunt Coordinator and Bodyguard.

About Darlene Brock:
Darlene Brock is the co-founder and president of The Grit and Grace Project, author and co-host of This Grit and Grace Life Podcast. It was in the busyness of producing award-winning music videos, managing music groups, promoting concerts and serving as COO of ForeFront Records that Brock raised her two daughters alongside her husband Dan. She understands that motherhood is not just one job, but it is many. As Brock embraced grit and grace to master the challenges in her life, she became inspired to write about raising confident and capable daughters, understanding that perfection was not required. Every element of The Grit and Grace Project which she launched in 2015, including the magazine, podcast and book publishing affiliate, was created to remind women that true beauty is found in a woman’s strength. Brock has been featured on FOX & Friends, Focus on the Family and Family Life Today radio programs, and multiple ABC, CBS, NBC and FOX affiliates. She has been a featured columnist for CNN and written for numerous Family oriented magazines and websites. This unique blend of author, mother, businesswoman, wife and creative producer has shown her that it is indeed true, “life challenges should neither defeat nor define you.”