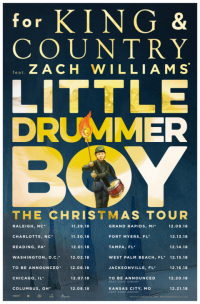 Two-time GRAMMY® Award winners for KING & COUNTRY will hit the road in December with their Christmas tour extravaganza Little Drummer Boy | The Christmas Tour, presented by Compassion. The nationwide trek kicks off on 11/29 in Raleigh, NC, and will be heading to major markets such as Washington D.C. (EagleBank Arena), Chicago (Willow Creek), and Tampa (Amalie Arena). Joining the duo on tour is special guest Zach Williams, and rising star Cory Asbury (performing on the last two dates). Pre-sale begins August 15th at 10:00am (local time) and ends August 16th at 10:00pm (local time). Users can access the pre-sale by entering the code “joy” HERE.

The band states: “It’s family, it’s hope, it’s God – and in turn, it’s the greatest celebration the world has ever known. Now is the time to pound on those drums, sing carols and anthems, ring in the glorious season together…. and who knows, maybe even see us play a few songs from our brand-new album Burn the Ships. We truly hope you can make it.”

Last year, for KING & COUNTRY celebrated their Christmas run with the release of a live music video for their performance of “Little Drummer Boy,” which reached No. 1 overall on the iTunes music video chart. The video has been viewed over 15 million times, and has amassed over 300K shares, making it the most reactive Christmas video of 2017. You can get a sneak peek into the tour by watching the remarkable “Little Drummer Boy” video HERE.

To preorder for KING & COUNTRY’s upcoming album Burn the Ships, due out October 5th, click HERE.

The already glimmering star continues to shine for two-time GRAMMY® award-winning duo for KING & COUNTRY. Their lead single “joy.” just reached the top of the Billboard chart, has received over 8.2 million streams and was included on USA Today/The Tennessean’s “Best Songs of the Year” (so far) all-genre list, proclaiming “’joy.’ is an infectious, upbeat anthem about choosing to be joyful in the face of hardship.” “joy.” is currently No. 1 on the Billboard Christian Audience chart, and has already reached the No. 1 spot on radio in Canada, Australia and Mediabase CHR.