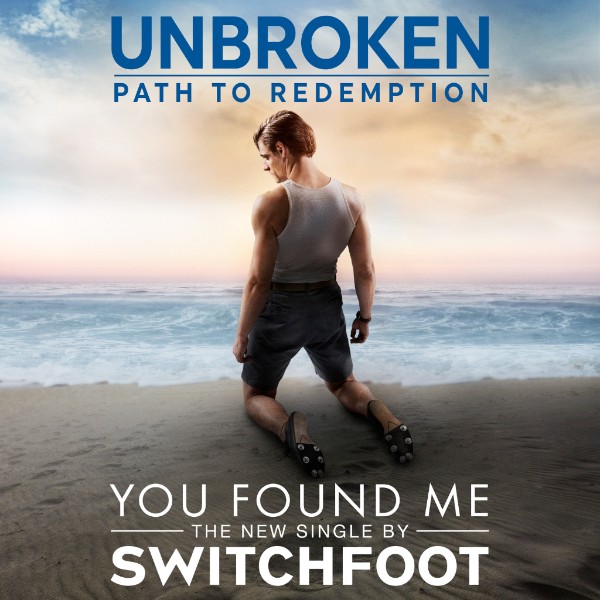 GRAMMY Award®-winning and platinum selling recording artists SWITCHFOOT debuted their first new song in over two years, as announced today on the band’s social media pages. The brand-new track, “You Found Me,” was written for the motion picture UNBROKEN: PATH TO REDEMPTION and is the lead single from the film’s soundtrack album, releasing day and date with the film’s theatrical release on September 14th. Clips from the film are featured in the music video for the song, which will debut exclusively via SWITCHFOOT’s social media pages on Tuesday, August 14th before being serviced wide on Wednesday, August 15th. Fans can pre-order the soundtrack today and get the song instantly!

Based on Laura Hillenbrand’s best-selling book, UNBROKEN: PATH TO REDEMPTION begins where the 2014 hit movie Unbroken concludes, continuing the inspiring and unbelievable true story of the Olympian and World War II hero Louis Zamperini. The band’s connection to the story of Zamperini is deeply felt in the lyrics of the song and message of the music video. Jon (lead vocals & guitar) & Tim Foreman (bass) had a grandfather who served in World War II as a fighter pilot, flying the same plane that Zamperini flew (B-24). Like Zamperini, their grandfather was shot down and survived. They have always been deeply connected to Zamperini’s story, and thus it was fitting for them to be able to tell it within the musical anthem for the film.

“One of my favorite stories is the tale of [Louis] Zamperini’s remarkable life – a legacy of finding hope in dark places,” says Jon Foreman of SWITCHFOOT. “When the producers of the movie approached us about writing a song for the film, we jumped at the opportunity. And as I was writing the song, one thought kept coming back to me: He must have fought the temptation to give up, over and over again. I wanted to write a song that would capture the healing available not only to a hero like Zamperini, but for the rest of us as well. ‘You Found Me’ is a song that highlights a journey of faith, redemption, and coming home.”

“From the minute I heard the demo, I was blown away,” says the film’s producer, Matthew Baer. “’You Found Me’ perfectly captures the feelings of the Zamperini’s amazing 54-year marriage, while also reflecting Louis’ inspiring connection to God. Musically, the song builds to its ‘third act’ crescendo echoing the film’s arch, while the vocals soar with the band’s collaborative spirit. This is the spirit that has made SWITCHFOOT’s music stand the test of time.”

Written by Richard Friedenberg (A River Runs Through It) and Kenneth Hixon (City By The Sea), the film is produced by Matthew Baer and Mike Elliott, directed by Harold Cronk, and executive produced by Dave Mechem, Luke Zamperini, Cynthia Garris, Erik Weir, Bill Reeves and Michael Scott.

UNBROKEN: PATH TO REDEMPTION is produced and released by Universal 1440 Entertainment, The WTA Group and Pure Flix.