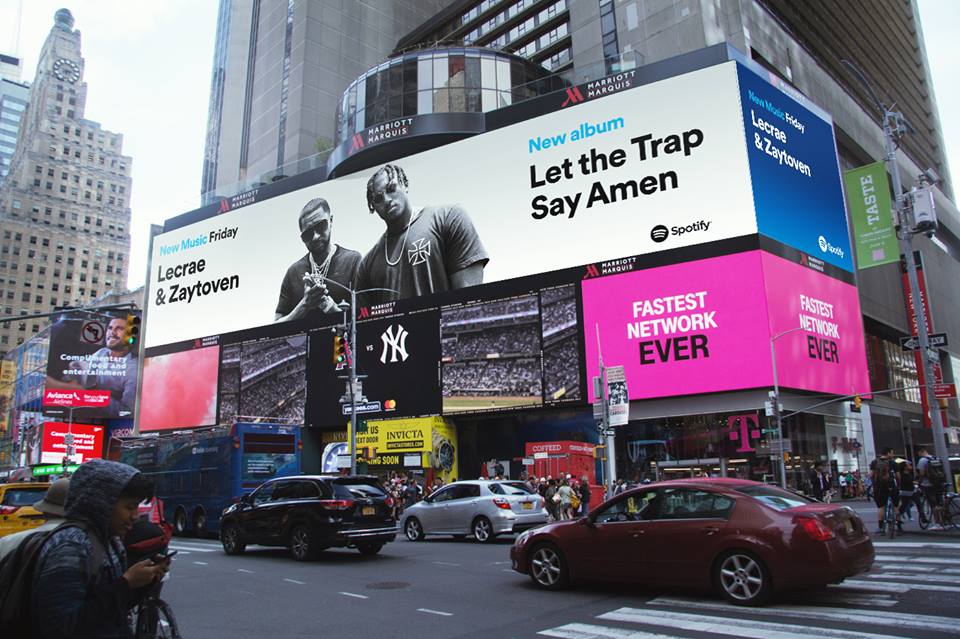 Born out of a mutual respect for each other’s work and joined by common faith, the two Atlanta legends came together for a release aimed at bridging understanding and building community, especially in underserved neighborhoods across America often dubbed “The Trap.” The 13-track project touts features from the likes of 24hrs, nobigdyl., and Verse Simmonds, as well as one of Atlanta’s best-loved sons, Waka Flocka Flame.

The record has already garnered praise from both mainstream and hip hop press alike, including NPR New Music Friday, Billboard, and Complex. This week, Lecrae appeared on ESPN’s SportsNation, letting “The Nation” know Let The Trap Say Amen was set to arrive and the leading entertainment site, WorldstarHipHop, exclusively premiered the music video for “Get Back Right” to positive reception.

In a guest editorial Lecrae penned for DJBooth.net to announce the project, The Trap Does More Then Say “Aye”, Lecrae explained, “When I hear the term ‘trap music,’ I don’t think of glorifying the negativity. I think of a soundscape that speaks a certain language. I think of music that tells real stories.”  He went on to say, “There’s a whole other side to the trap that doesn’t get exposed…You can’t pigeonhole our communities. Everyone in the Trap ain’t trappin’.”

To bring his message home and to celebrate the positivity that exists in the trap, Lecrae is hosting a city wide community contest in Atlanta to honor exemplary small business owners, youth entrepreneurs, artists and musicians. On July 6, the outstanding contest winners will be presented with a cash prize during a pop up performance in Atlanta. Visit TrapSayAmen.eventbrite.com to find out more information.

Purchase/Stream Let The Trap Say Amen
1. Get Back Right // 2. Preach // 3. 2 Sides Of The Game feat. Waka Flocka Flame and K-So Jaynes // 4. Plugged In // 5. Holy Water // 6. Blue Strips // 7. Only God Can Judge Me // 8. Yet // 9. I Can’t Lose feat. 24hrs // 10. Switch feat. ShySpeaks // 11. Can’t Block It // 12. Fly Away feat. nobigdyl. // 13. By Chance feat. Verse Simmonds
Nearing the 2 million mark in sales, Lecrae has won a Billboard Music Award, multiple BET, Soul Train, and Dove awards, with an Honorary Doctorate of Music to go along with his two Grammy wins and Best Rap Performance nomination. Past signature songs include the ultra-relatable “I’ll Find You” featuring Tori Kelly, the prophetic, hypnotic “Welcome To America,” along with the powerfully charged “Blessings,” featuring Ty Dolla $ign. Lecrae is a best-selling author, entrepreneur and social activist. He’s a NY Times Bestseller after the release of his heartfelt memoir ‘Unashamed’ and and his breakthrough spoken word performance at the BET Hip Hop Awards drew global praise.