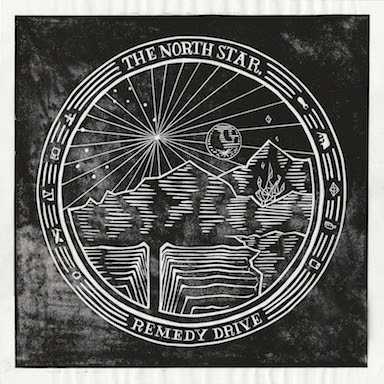 In recent years, the members of Remedy Drive have been active in the fight against human trafficking by teaming up with an organization by the name of The Exodus Road. Frontman David Zach has travelled to Southeast Asia and Latin America and volunteers with Team Delta. For more information go to the band’s website linked below. As a follow -up to Commodity, Remedy Drive releases songs of freedom in their album The North Star.

To give listeners a fair warning, this album is vastly different from their past albums in a musical and lyrical sense, but that is because the members are creating from an altered perspective on the world. Having seen firsthand the places human trafficking takes place, and having met people affected by it, this album reflects their experiences through the medium of music.

“You Got Fire” introduces the album in with dark, raw strums from a guitar. Lead singer David Zach raps in the verses, sounding a bit angry toward the complacent attitudes many people have regarding social justice. The fiery vocals of Rachel Lampa ring out a haunting melody in the bridge. A layered instrumental intro sets the ground for a story of a girl with “Sunlight on Her Face”. This song tells the story of many of the girls forced into prostitution, and reveals some of the harsh realities faced by trafficked people. In a creative spin, the bridge takes the story of the girl and globalizes it to be about victims all over the world.

“Warlike” leads in with a distorted heavy bass, with lyrics more spoken than sung that question many of the things that are wrong in the world. These questions are honest, but the lyrics take on a new meaning when they point to the self as guilty. A finger pointed at Christians’ own apathy and hypocrisy, the low-pitched, rough instrumentation ends the song without resolution, as if to leave listeners to examine the accusations brought up in the song on their own.

“Brighter than Apathy” sounds a bit more like the music of Remedy Drive’s previous albums. The music is more balanced and smooth under the vocals. The bridge is a wake-up call to apathetic souls, but what is most impactful is a chorus of children singing beneath the bridge and through the outro.

“I Don’t Belong to You” has a percussion focused intro, and somewhat rebellious lyrics against a consumer filled society. Similarly, “Sanctuary” has a rhythmic undertone beneath the lyrics. The verses sound like a chaotic storm that gives way to a peaceful, melodic chorus. The sonic diversity continues with a spoken word portion featuring rap artist Propaganda and closes the song with a choral calling for hope.

If this album had a title track, “Polaris” might be it, as Polaris is another name for the North Star. It’s a song of hope, with mentions of fires burning and lyrics that tell listeners to “Stay strong/ be brave/ ripples turn to tidal waves”. Polaris has an inventive, layered instrumental interlude, much like some of Remedy Drive’s older radio hits.

“Kingdom” is a short and simple piece over muffled piano chords, a softer break from the rest of the album. On the same note, “Redemption Song” is a break from the heavily layered instrumentation and takes a softer sound, with humble lyrics.

The album draws to a close with two musically well-done tracks. “Endless” has an upbeat, energizing intro riff that transitions into lyrics of the “fight on” mentality. Littered with several creative synth licks, listeners will do well to listen closely, lest they be missed entirely. “Disappear” invites God’s presence into the darkness of the trafficking situation.  “The darkness is the forecast/ I’m waiting for the dawn/ I’m still waiting for the dawn” are hopeful lyrics sung into the darkness.

As a whole, this album is unique in many ways. Needless to say, the lyrics are daring, angry, passionate, and brutally honest as they tell of harsh realities in the world and question the apathy within ourselves. The music is saturated with oddly distorted guitars, layered synths of varied melodies, forceful percussion, and a range of dynamics from soft to loud. In some tracks, the vocals and music can hardly be reconciled, yet it somehow seems to work. It’s noisy, sometimes dissonant, much like the complexity of humanity and all its problems. If “The North Star” is meant to make listeners feel uncomfortable, it certainly does the job. It’s meant to jolt people out of complacency, to examine their convictions and take action. Underlying the dark themes and questions these songs mention, a flicker of hope is present in the references to light or fire scattered in the lyrics.  A message that inspires and leaves listeners to make a choice on their own course of action regarding the issues presented. Remedy Drive blazes a new trail with “The North Star”, one that I hope more artists will follow in the coming years.