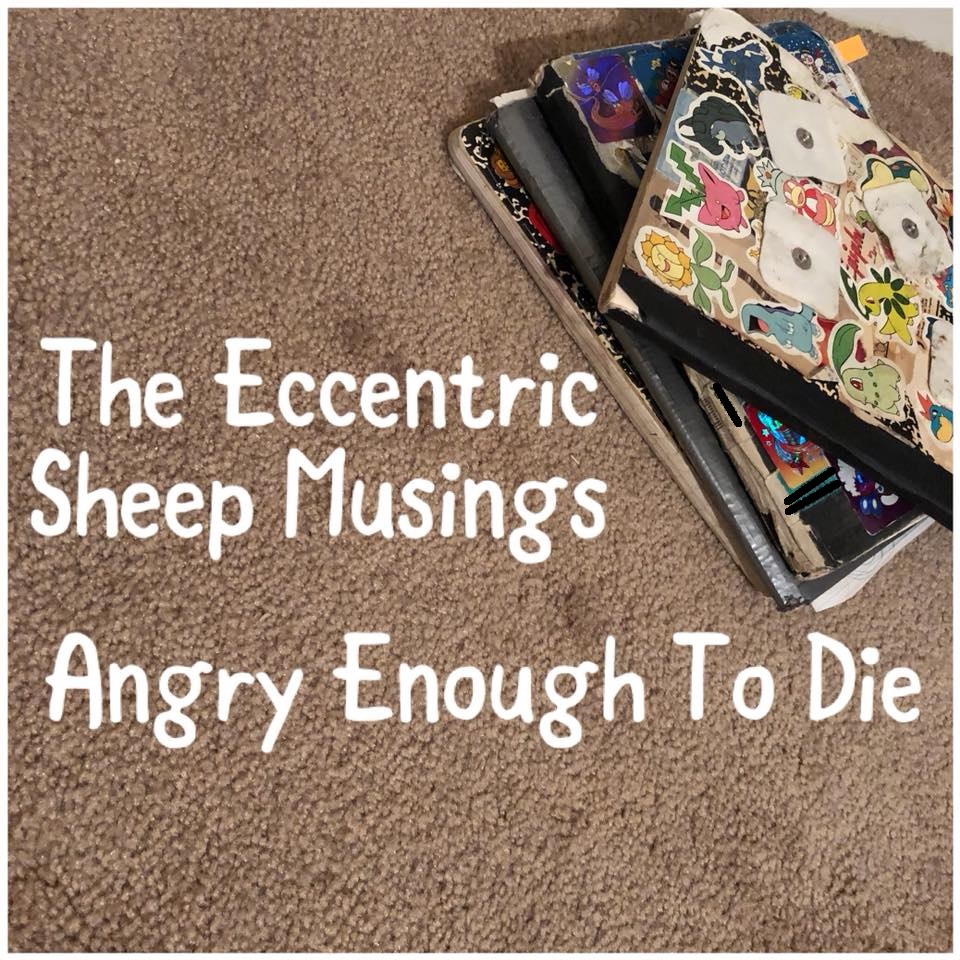 I’ve got a stack of poetry journals that covers my high school and college years.  They sat dormant in my mom’s attic for a long time.  I pulled them out recently to pull out some old gems for a compilation I was putting together.  I hadn’t read them in a long time.  I figured I was in for a journey through all my old sadness and despair from the deep depression and suicidal thoughts I struggled with then.

Nope.  It was all anger.  Every single poetry journal was filled to the brim with blood boiling seething anger.  Many times it was pointed directly at someone.  I grabbed a sharpie and marked out all the names in case I die and these journals are released to the public.

Wow, really?  All anger?  I was a bit surprised at first.  After thinking about it I realized I probably do have an anger problem and have for a long time.

But where did it come from and why was it here?  Some of it is pointed at myself.  That frustrating disappointment of failing to reach perfection time after time.  Wait a second, the problem is we can’t be perfect.  That’s right, we will never reach perfection on this earth.  Yet many of us expect it of ourselves and then react negatively when we don’t achieve it.  Something in our lives at some point made us determine that we had to be perfect.

2 Cor 12: “9 But he said to me, “My grace is sufficient for you, for my power is made perfect in weakness.” Therefore I will boast all the more gladly about my weaknesses, so that Christ’s power may rest on me.

Yet God has poured his ever flowing mercy on us in generous amounts despite the fact that we aren’t perfect.  He sent his son to die for our imperfections and granted us grace.  Yet, we are incredibly hard on ourselves despite this ultimate display of unconditional love that has been set before us.  Grace is a hard concept at times.

However, I think most of my anger is centered on needing to feel in control.  Anger is a part of anxiety and depression.  Perhaps it’s from irritability from having your adrenaline and worst case scenario thoughts ramped up to 12 for no reason for a period of time.  Perhaps it’s from all those intrusive thoughts stewing around in your mind repeatedly and getting darker and darker with every lap around the inside of your head.  However when anger arises, it can be difficult to deal with and manage.

Control is a hard concept at times also.  The truth is, we are never in control.  You might think you have control of your piece of earth around you, but the truth is there are so many forces around you that could change at an instant and send your life into a tailspin.  However, God has always been in control and always will be in control.  You do not have to resort to compulsions to gain control back.  He never lost control even when it feels like you have lost it.

So, what can we do about it?  The idea of completely irradiating anger might not be possible.  We might not be able to prevent its arrival into our lives.  Anger is like a fire that flares up out of nowhere.  The conditions become perfect for it to flash and so it appears.

One thing you can do is start to become aware of what triggers your anger.  You might not be able to stop it but if you understand how you work, seeing the fire coming can be possible.  Anger loses some of its power when you expect it and can prepare for it.  You have to get a rein on it and not let it run lose on a rampage.  Just like a fire, anger can also die down until it’s burned out completely.

Jonah 4 is an amazing book of the bible to consult about anger.  I don’t think it gets enough credit for the wisdom held in those few words.

“5 Jonah had gone out and sat down at a place east of the city. There he made himself a shelter, sat in its shade and waited to see what would happen to the city. 6 Then the Lord God provided a leafy plant and made it grow up over Jonah to give shade for his head to ease his discomfort, and Jonah was very happy about the plant. 7 But at dawn the next day God provided a worm, which chewed the plant so that it withered. 8 When the sun rose, God provided a scorching east wind, and the sun blazed on Jonah’s head so that he grew faint. He wanted to die, and said, “It would be better for me to die than to live.”

9 But God said to Jonah, “Is it right for you to be angry about the plant?”

10 But the Lord said, “You have been concerned about this plant, though you did not tend it or make it grow. It sprang up overnight and died overnight.”

One thing that helps me with anger is thinking about how ridiculous it is in the grand scheme of things.  I think of God saying, “Is it right for you to be angry?”  If you struggle with anger as often as I do, chances are many of the reasons anger flares up are things not worth dwelling on very long.  They are things God has already had plans to take care of since before we even walked this earth.

Don’t let anger destroy you and everything around you today.  You have the creator of the universe working in your life today.  You don’t have to be in control of everything.