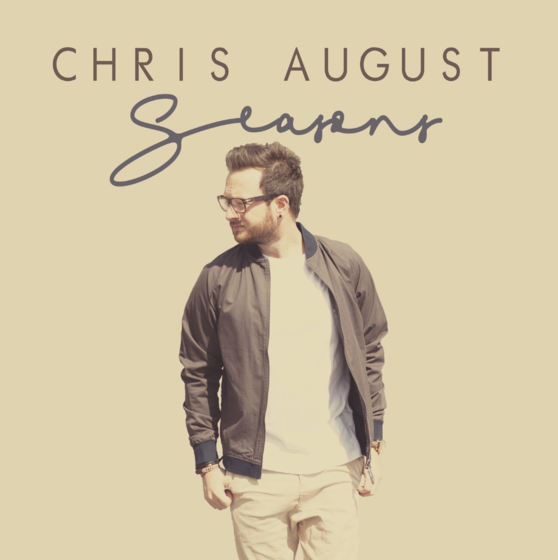 Multi-award winning artist Chris August is proud to announce the release of his new album, Seasons, as his first independent release since 2008. Seasons follows his three previous album releases with Fervent/Word, 2010’s No Far Away, The Upside of Down (2012), and 2015’s The Maker. With a deep desire to get back to making music that was creative and authentic to who he is as an artist, August’s new songs are full of inspiration without constraints. Click here to download the album, and here for streaming.

“I love the journey and the seasons we go through in life. I felt like this release needed to be called Seasons because of where I am in my career, newly stepping out as an indepedent artist and excited to get this music out into the world,” shares the three-time GMA Dove Award winner (Male Vocalist, New Artist, Pop Album of the Year).

August continues, “I’m in a different season now since my last release. I’ve gotten married, I’ve grown in my faith, and now I’m releasing music on my own for the first time in 10 years. I’ve worked hard to pour myself into all elements of it from the writing to producing…and it’s finally time to share with everyone.  It’s my hope that these songs will encourage, inspire, and challenge people in the season of life they’re walking through now.”

Accolades are already coming in about Seasons. NewReleaseToday.com, who has also named August Artist of the Month for June, states “Seasons delivers an incredibly fresh and vibrant set of tracks that are full of celebratory, real-life truth of God’s always present consistency, all from a familiar voice that has been deeply missed in Christian music. It’s good to have Chris August back!”


For more information, please visit his website ChrisAugustMusic.com and his social links below.

ABOUT CHRIS AUGUST: Chris August quickly became a favorite in the CCM genre. With an impressive sweep at the 42nd Annual Dove Awards, he earned awards for New Artist of the Year and Male Vocalist of the Year, adding him to an elite group of only three artists in the history of the show who have received both awards. He also claimed the nod for Pop/Contemporary Album of the Year for his debut album No Far Away released by Fervent/Word Records, the same album that delivered August’s debut single “Starry Night.”  August released The Upside of Down in 2012, which produced the hit singles “Center of It,” “Restore” and “Unashamed Of You.” His 2015 release, The Maker, produced August another No. 1 hit at radio with “The Maker.” His most recent release and first fully independent album since 2008, Seasons, hit in June 2018 with the first single “Nothing’s Beyond Broken” going for radio adds in August.