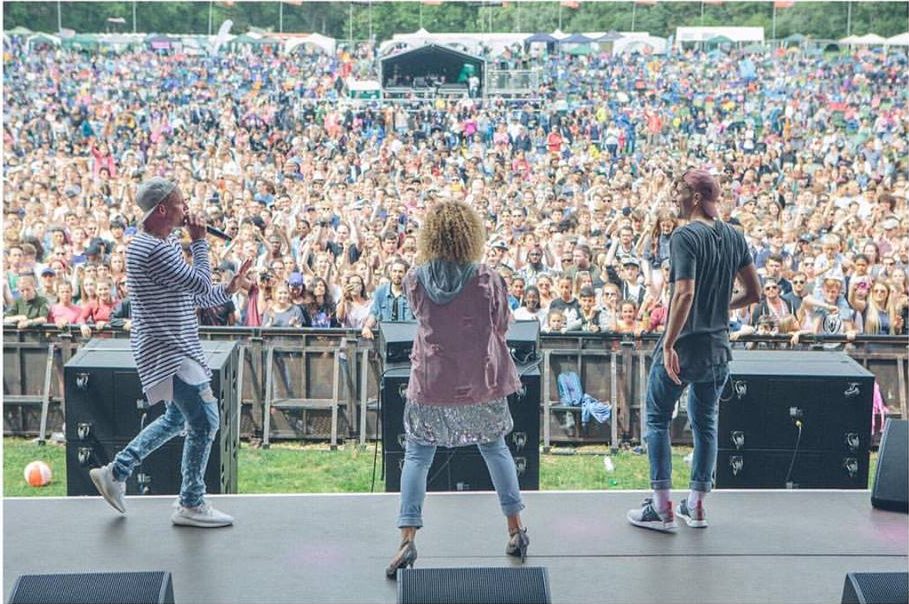 This weekend marks the 10th anniversary of the UK’s biggest church gathering-come-Christian music festival, The Big Church Day Out. Started up by ex-Delirious member Tim Jupp to bring different denominations together to worship our amazing Creator, the festival has grown from a 1 day solitary event in the grounds of the beautiful Wiston House in West Sussex to two 2-day events; with the 2nd ‘North’ event taking place at Capesthorne Hall, Cheshire.

This year they’re expecting over 40,000 people to gather across the two events but that’s not the only area they’ve seen large growth in. The number of stages, or in some cases stages in tents (it is the rainy UK afterall!), has grown, the number of music acts has grown massively with over 70 artists expected to perform this year and the size of the acts has grown considerably. The festival has seen acts like Switchfoot, for KING & COUNTRY, TobyMac, Newsboys, Lecrae, Andy Mineo, Planetshakers and more making the trip ‘across the (rather large) pond’ to perform.

This year’s no different, with gospel powerhouses Jonathan McReynolds (and his super strong hat game!) and Travis Greene among those performing. Other artists include Britt Nicole, for KING & COUNTRY for their ‘joy’ous 2nd appearance, Crowder, Kari Jobe, ex-Delirious? frontman Martin Smith and many many more. There’s not just music though, there’s a lot of family activities, prayer spaces, fun kids services and food, oh there’s lots and lots of food (inc. hot doughnuts, a personal favourite!).

As a Christian music fanatic living in the UK I often joke that God made an admin error in which country He placed me in. But we all know God doesn’t make mistakes so over the years the Big Church Day Out has very quickly become a highlight of my year. A chance to hang out with the artists, some of which have played a huge role throughout my life without knowing it, and a chance to let my shy walls and hair down, and go absolutely nuts, jumping with thousands of fellow believers as one…one of ‘my homes’ on this earth.

Anyways, that quick intro wasn’t that quick! Here’s my last minute guide to who i highly recommend seeing this weekend at the South event (or indeed the North event next weekend!)…

for KING & COUNTRY – Let’s start off with a big one shall we? for KING & COUNTRY have one of the best, if not the best, live shows in all of Christian music. Recently releasing their first new music since 2014’s Run Wild. Live Free. Love Strong. brothers Joel and Luke Smallbone have gone through more than their fair share of personal illnesses and trials. Perhaps it’s those trials that make their music so relatable but it’s their pure abundance of musical talent which makes their live shows so mesmerizing. Just watch how many instruments they each play while performing. I caught them the last time they were here, a show high up on my list of American artists I have to see before I pass on, and they exceeded my already high expectations. They are a MUST SEE!

Their new single joy. is just so wonderfully joyful it’s impossible not to smile while watching the video. Watch out for cameos by Candace C Bure as Negative Nancy and ex Group 1 Crew member Manwell Reyes.

LZ7 – A BCDO favourite, LZ7 also have one of the best live shows out there. Albeit in a completely different genre to for KING & COUNTRY. Quite frankly their live show is one of the most exhausting live experiences anyone can ever have, beaten only by maybe Good Weather Forecast’s show. How charismatic frontman Lindz has THAT much energy as he continues to ‘level up’ in years is mental…or inspiring (I’m still trying to decide after 15 odd times of seeing them live!). Whether you’re a kid (40/50 year old kids are included!) and up front dancing & jumping for 50 minutes, or a mum/dad/grandma/grandad (other family members are available too) sitting at the back on the expansive hillside, they WILL get you involved. Seeing old people doing the Strobot when they didn’t know they were about to is one of the purest joys you can imagine!

So grab your dancing shoes, take a deep breath and be prepared to go absolutely nuts. Honestly, their live show is my favourite live show of any band and I’m once again getting ready to blow my youth group away with just how much energy this usually quite lazy person has! Their new single Legends feat. Silento dropped today. Check out their new video…

Galactus Jack – Speaking of dancing…this dude, DJ Galactus Jack, will be warming up the main stage (I expect) on both days and there aren’t many better DJs out there to help put you in a good mood, get your ‘dancing skills’ warmed up and get those good vibes flowing through your body. Good vibes? oh yeah, he has those in abundance…

Philippa Hanna – If dance music isn’t your thing, but sitting in the Tea Tent listening to soulful music is, then Philippa Hanna will be your ‘cup of tea’ (sorry, I had to!). Taking on the mammoth challenge of uploading a new inspiring video on YouTube every.single.day for 2018, Philippa’s taken ‘inspiring the many’ to a whole new level, offering many pearls of wisdom already. Please do subscribe to her YouTube channel here to watch those but it’ll be her music that’s taking center stage this weekend. Soul, pop, worship, country, folk – there’s a little bit of everything gentle in her music, and it’s wonderfully joyful and inspiring. There aren’t many better artists out there for when you’re feeling low…

Britt Nicole – In 2017 there was one album I listened to more than every other abum’s play counts added together, Britt Nicole’s 2016 self-titled album. And she’s a pop artist…and I love my rock, so that’s saying something. Her music really is THAT good. Full of God, candy like pop vibes and a whole lotta swagger, her music transcends genre boundaries and wiggles its way into even the hardest rockers out there. Popular songs from her back catalogue like Gold, Ready or Not, Set The World On Fire (a personal life anthem) along with new songs like Work Of Art, After You and Be The Change (another life anthem) are among the many songs I’m hoping she does. Although to be honest, I’m just excited to see her live (providing my shifts don’t overlap! Oh please Mr. God no!).

Guvna B – Back to the energetic performers now and the king of the Kingdom Skank himself, Guvna B. Guvna B is a moniker for God’s Unique Vessel Now Assigned, and that’s an accurate portrayal of just how much God is at the front of Guvna’s music. Now an inspiring author too (buy Unpopular Culture here), Guvna isn’t afraid to buck the popular trends and make the music God puts on his heart. His live shows are as energetic as they come, and highly highly enjoyable. Between him, Faith Child, J Vessel and A Star they make the CHH fans more than satisfied. Other than plugging his brand new album Hands Are Made For Working, there’s only one more thing to say…ALLO MATE!

Faith Child – Faith Child is another BCDO favourite with his live shows being only 2nd to LZ7’s in terms of energy. He’ll have you jumping, dancing to groovy vibes and questioning why you haven’t worked out more. His vibrant energy is as catching as they come. You will have this hook and related ‘bouncing from side to side’ action stuck in your mind/muscle memory for weeeeks afterwards.

A Star – Bringing the grime to the party, A Star will undo any pre-conceptions about a “grime artist” you may have. Honestly, I can’t name a better grime artist than A Star. Spot a song that has an A Star feature and you know you’re in for a treat, he kills it absolutely every time. Just check out his bars on Faith Child’s Chosen Ones track – which they could perform together at BCDO. A Star will make you a fan of grime.

J Vessel – Wrapping up the best of the hip hop acts is up-and-comer J Vessel. He’s got energy, bars, talent, vibes and swagger in abundance, especially the latter! (His dad, DJ Kelechi, doesn’t do bad in the swagger stakes either) J Vessel’s set simply cries out to be checked out, you won’t regret it!

Lily Jo – Are you a teenage girl, or do you have a teenage girl? Do you suffer from mental health issues? Lily Jo’s music is perfect for you (it’s great for other folks too of course). I’ve already used it a few times but Vibrant is the perfect word for Lily Jo. Other great words to sum her and her music up would be bubbly, joyful and relatable. It’s simply impossible not to feel a bit happier when around her. She also heads up the Lily-Jo Project, an award winning mental health resource. Find out more about that here. Her new Unstoppable EP recently dropped too, pick that up here.

Chip Kendall – Got kids? Head on up to the Big Church Kids tent and they’ll thoroughly enjoy themselves with Chip Kendall and the praise ship orbitron. I mean the name just screams fun right? the Praise Ship Orbitron? I want to hop on board! Oh and parents can enjoy the fun too so get ready to let that inner kid out of you!

Kari Jobe – I’m very picky when it comes to Worship or CCM music, it just isn’t my “day-to-day” thing, but I’d ‘pick’ Kari Jobe’s music any day of the week for a bit of ‘worship food’. Her songs are haunting, worshipful and beautiful. If worship is your thing, she’s among the highlights of the tons of worship acts over the weekends.

If you’ve read all of this, I’m sad to say the only prize is a “congratulations” from yours truly! If you’re attending BCDO, please do come and say hi to me in the Illuminate tent next to the Illuminate stage or on the LZ7 stand in the Bazaar. And if you wanna come party with me, LET’S GO!!!!