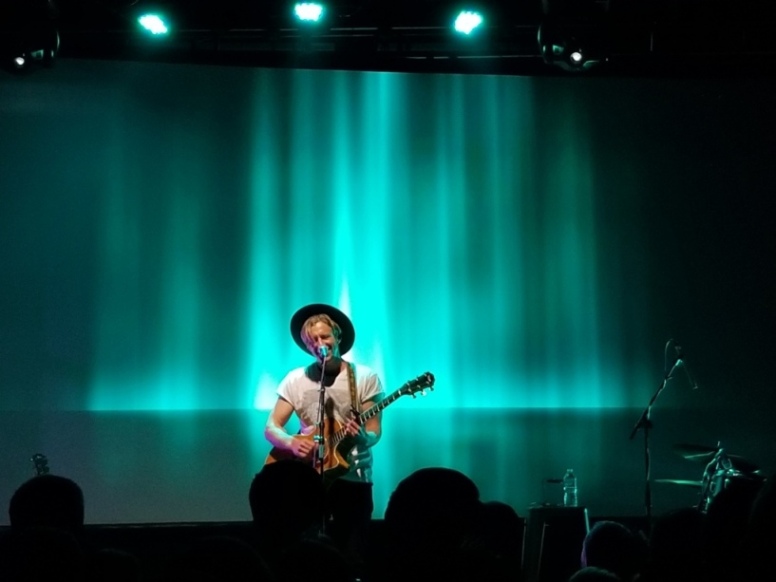 Jon Foreman Inspires at The Underground

It was a rather chilly Sunday night in Cincinnati, Ohio as a line began to form outside of The Underground concert venue.  A quiet anticipation buzzed through the air as people filled the room and chose a seat.  They eagerly awaiting what promised to be an exciting evening.  A film had been made of Jon Foreman’s recent adventure of playing 25 shows in 24 hours.  This had been a dream of his that he was able to fulfill.  In addition to Jon playing the expected concert, this tour also features the new film.  As the minutes ticked by, the audience was treated to video clips from Switchfoot’s early days.

The hour finally approached, and the lights grew dim.  A hush spread over the crowd as the movie screen came to life and an aerial view of ocean waves danced across the screen.  A haunting melody began to play as Jon Foreman’s voice told of the story and inspiration behind his dream.  The film, 25 in 24, followed Jon and his friends as they embarked on the slightly crazy and very ambitious challenge of playing 25 shows in 24 hours.  There were interviews with those who participated in the project, as well as clips from each of the shows.  It was an engaging and inspiring film, and the audience was asked to think about what their ultimate dream is.  They were challenged to believe that it could be possible.  After all, if a man can play 25 shows in 24 hours, then the sky is the limit.

After a brief intermission, Jon took the stage along with Keith Tutt on cello and Aaron Redfield on drums.  They started with the same song that had opened the film.  It first began with simply Jon on vocals.  The cello and drums were then gradually added, verse by verse.  They continued with “Terminal”.  Jon played a finger picking pattern on his acoustic guitar as a tremolo effect emanated from the cello.  Aaron chimed in on the drums, his mallets producing a low rumble.  At the song’s conclusion, Jon held up a piece of cardboard with “Terminal” scribed on it.  There were napkins and tissues and other various pieces of paper containing song titles that audience members had requested strewn about the surface of the stage.  As Jon said, it was all part of embracing the chaos, leaving the set list to chance.

The next song was the Switchfoot classic “Meant to Live.”  In true Jon Foreman fashion, he got the audience involved.  He had everyone raise their arms in the air and set them back down to rest upon the shoulders of their neighbors.  This transformed the audience into one big close-knit group singing their hearts out and swaying gently.  “Resurrect Me” featured a harmonica solo.  Jon even took a moment to use the harmonica as a slide on his guitar.

One of the song requests yelled from the audience was “Vice Verses,” and Jon obliged, taking a few moments to explain his inspiration behind the poignant song.  He was walking along the shores of the Pacific one afternoon, debris brought in by the high tide scattered about.  Jon was going through some struggles at that time, and began to think that his head felt a bit like the beach, thoughts scattered like debris.  His ponderings resulted in the contemplative lyrics.  As the song began, Keith coaxed the cries of seagulls from his cello, transporting the audience to the sandy seashore.

The band continued on with “Southbound Train” (beautifully illustrated on a napkin, as Jon pointed out), and “Live It Well.”  Jon then took some time to speak about what inspires his songs, saying that most times, his lyrics are born out of some sort of struggle, and the songs end up being prayers.  He continued with a perfect example in “Only Hope.”

Shortly before closing out the set, Jon spoke a bit about dreams, keeping with the theme of the evening.  He said that all things once started out as dreams.  Someone had to dream up electricity and musical instruments such as the guitar.  It was Jon’s hope that the film would help inspire others to bring their dreams to life.  It was, therefore, very fitting that he ended with “Dare You to Move,” an inspiring call to strive for one’s full potential, despite the many setbacks that will likely come up along the way.

The audience, of course, was not ready to accept that it was the end, and shouted for “one more song!”  The band was gracious enough to return to the stage and play a few more songs.  They started with “Inheritance,” and Jon strayed into “Won’t Back Down” and “Knockin’ on Heaven’s Door” before returning to his original song.

He then asked Keith and Aaron to join him in the center of the stage, declaring that things might get a little weird.  However, he said he has embraced the fact that he can be awkward, and that is just a part of being human.  And that is perfectly okay.  After all, we start out in life without a filter.  Children are very honest and will say whatever is on their mind.  We learn to put up a front, cover our scars, and build walls as we grow older.  But God looks down on His children and sees beyond the walls.

This was the perfect lead in to “All of God’s Children,” with the bass drum at times sounding rhythmically, like the beat of a heart.  The final song of the night was one last prayer to the Heavenly Father, “Your Love Is Strong.”  The band took their bows and exited to much applause and cheering.  It was a very uplifting and inspiring evening, filled with many great songs and wonderful memories.  The world could certainly use more moments like this, and more people like Jon Foreman.

Get tour dates and tickets here