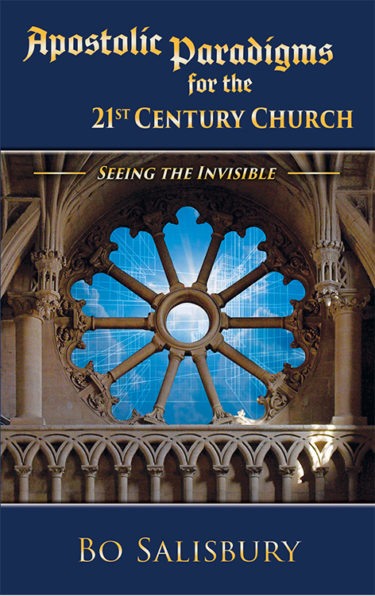 If you are interested in a deeper understanding of the things of God you may want to pick up a copy of Bo Salisbury’s latest book Apostolic Paradigms for the 21st Century Church: Seeing the Invisible (Volume 1). Salisbury’s book went on sale in early March 2018 and is the first volume in a series of three. The subtitle for the first volume is Seeing the Invisible, the second book- Doing the Impossible and the third book- Becoming the Invincible. The first book in the trilogy is filled with nuggets of revelation, wisdom and spiritual understanding to help the reader see things from an apostolic perspective. Apostolic Paradigms for the 21st Century Church Vol. 1 challenges some commonly accepted beliefs and encourages the reader to put into practice what God is speaking to them.

In addition to Apostolic Paradigms for the 21st Century Church: Seeing the Invisible (Volume 1) Salisbury published Accessing Supernatural Grace: Through Kingdom – Focused Prayer in 2016. This book shares his thoughts about the necessity of allowing the Holy Spirit to lead us in our prayer lives. Links to purchase Salisbury’s books are provided below.


In additon to his writing, Bo Salisbury has ministered the gospel of the Kingdom since his teenage years.  His travels have taken him to 29 nations and 32 states ministering in churches, leadership conferences, evangelistic crusades, prisons, prophetic training seminars, and Bible Schools.  His ministry is characterized by apostolic revelation and wisdom that brings breakthrough to churches, leaders and regions that he is sent to. Salisbury hosts Grace Life Facebook Live a couple of times a week; you can connect with him at the link below. You can also watch a video of his message from March 2017 at New Covenant Christian Church (NC3) in Wilkesboro, North Carolina here.

Read an Excerpt and Purchase Books by Bo Salisbury here