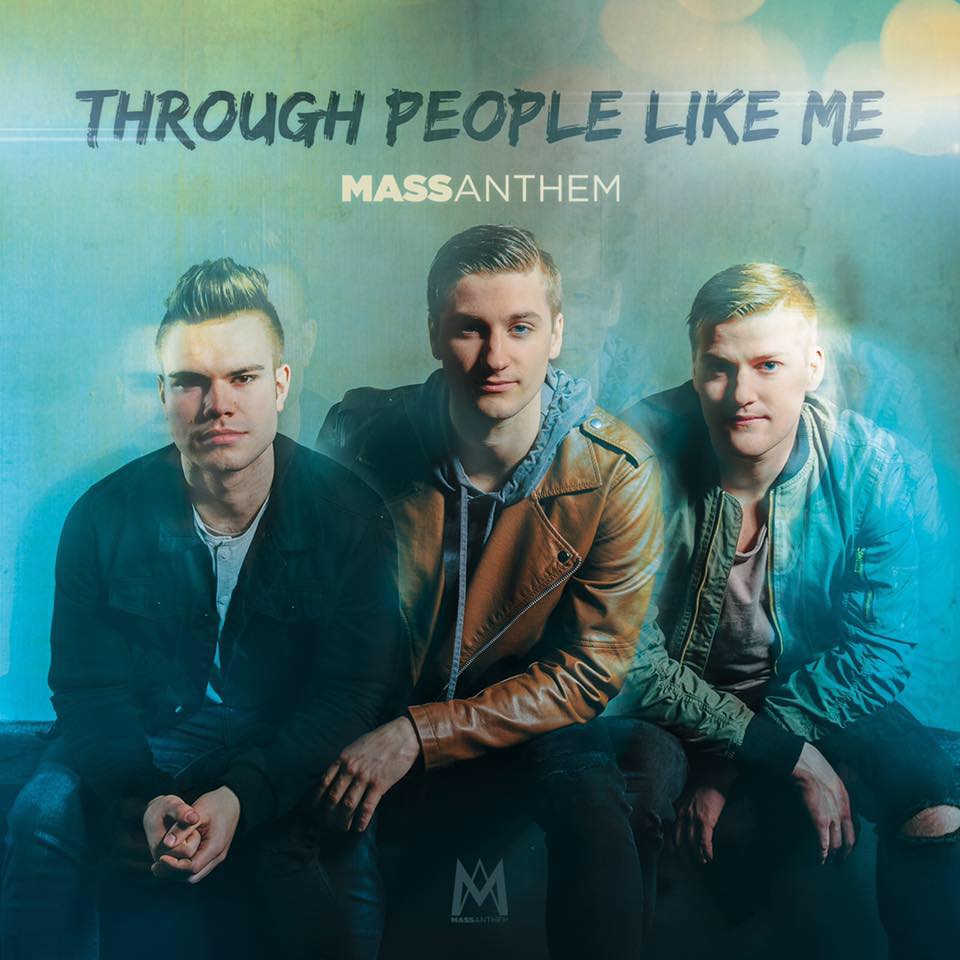 I recently had the chance to connect with DREAM Records’ new signing Mass Anthem to chat about their new single and album entitled Through People Like Me, their musical inspirations and how their signing with DREAM Records came about. Check it out…

[JW] Could you introduce us to the band members and where you’re all from?

[MA] Chad and Tyler are brothers who grew up in Springfield, IL. Joey grew up in Rockford, IL, and we met him during our college years at Judson University in Elgin, IL.

[JW] How did you all come to Christ? and when did you know you were called to be artists?

[MA] We are all pastors kids, so any time the church doors were open, we were there. I gave my life to Christ when I was in 7th grade at a local camp owned by the church I grew up in. I’ve always admired and been inspired by Christian bands. I was at a Winter Jam concert when I decided that I wanted to pursue music for the rest of my life. – Chad

[JW] How did you all link up to form Mass Anthem, and how did you come up with that name?

[MA] I started this band my freshman year of college at Judson. My brother and I played for a few years before Joey came in as a freshman. Once we heard him play guitar, we knew he was the guy we were praying for to join our band. We came up with the name, Mass Anthem, because we simply want to join with the masses of believers and lift up our anthems to The Lord together.

[JW] If listeners could take away just one message from your music, what would you like it to be?

[MA] No matter who you are, what you’ve done, or what’s been done to you, God loves you. He wants to use you to change the world.

[JW] Which artists would you consider to be your biggest influences?

[MA] Musically, our inspirations come from all over! Taylor Swift, Justin Bieber, The 1975, and Grey.

However, our biggest influences in the Christian Industry are For King and Country, Tenth Avenue North, Jordan Feliz, and MercyMe.

[JW] Do you have any favorite moments of when you’ve seen your music directly impacting people’s lives at one of your concerts/in person?

[MA] I can’t think of a specific moment, however, that is the very reason why we do what we do. We love playing music on the stage with big lights, but our purpose to all of this is to see and hear the direct impact God is making in people’s lives through our music. Our favorite part of the job is meeting those after our concerts who share their stories and tell us what song has impacted them the most.

[JW] You originally released your Through People Like Me album independently last year but have since signed with DREAM Records and re-released it through them last month. How did the signing come about?

[MA] The signing process with Dream was a total God thing. We came to the point in our career where we simply prayed that God would provide us a team to work with who is just as passionate for our mission as we are. A team that pursued excellence in their field so we could pursue excellence in ours. We got a call less than two weeks later from Lance, the A&R guy from Dream, and after much prayer, we signed with them two months later.

[MA] We’ve absolutely loved working with Lance and his team. They are the definition of working with integrity.

[JW] You’re about to release your new single Through People Like Me, the title track from the album. Tell us about the inspiration and message behind that song.

[MA] I believe that so many believers, including myself, have gone through stages of life thinking we don’t have any value, or we don’t have anything to offer. Because of whatever wrong we have done in the past, or whatever wrong has been done to us, we are disqualified for God to use us. However, the gospel is the truth that Jesus came and died for us while we were still sinners. He didn’t die for us because have had everything perfectly together. God doesn’t ask of us to be perfect in order for Him to use us. He desires for us to love Him and allow Him to use us to impact His Kingdom. Jesus is the one who qualifies us to do so. This message is for people who have been Christians their entire lives and also for people who have been a Christian for less than 24 hours. God chooses to change the world He has created through broken yet redeemed people like you and me.

[JW] Take us behind the production process of that track – how long did it take to write, where did you record it etc

[MA] I wrote this song in Nashville, TN with Tony Wood and Daniel Doss. We then recorded this song with a good buddy of ours in the Chicagoland area. The writing process took about four hours while the recording process took around 20 hours for the whole thing to come to life.

[JW] What does Through People Like Me mean to you guys personally?

[MA] It reminds me that I don’t have to be perfect or strive for perfection for God to use me and love me. He loves me because he sees me through His Son, Jesus. If God is going to use me in anyway to impact His Kingdom, it’s all because of Jesus.

[JW] What was it like working with Beacon Light on Everything to You?

[MA] It was a blast working with him. We originally weren’t planning on having a rap in Everything to You, but the more we worked on the track, the more we kept hearing a rap that would take it to the next level. Our manager got us in contact with Beacon Light and he absolutely crushed it.

[JW] Time for a nice easy question…which track on the album means the most to each of you?

[MA] I would say Hero. That song is closest to my story and the most personal. I’ve been in that place, wondering and praying where God is in all of this, and he constantly reminds me that I don’t have to walk through life alone.

[JW] Are there any artists out there you would love to work with on a future track?

[MA] We’d love to one day work with Tenth Avenue North and For King and Country! We love what both of those bands are doing.

[JW] What song or album by another artist are you currently loving?

[MA] Control (Somehow You Want Me) – Tenth Avenue North. This song reminds us that we are so deeply loved by God. He doesn’t need us, but wants us! It’s a beautiful picture of His unconditional love.

[JW] Are there any bible verses which mean a lot to each of you right now?

[MA] We plan to do a full summer tour as our single regularly rotates on radio. We also plan on building our YouTube platform as well as social media platforms. I’ve also started writing for the next album. We’re stoked for what this album and single will do, however we keep grinding and working on new projects!

[JW] And the most important question…does pineapple belong on a pizza?

[JW] How can the JesusWired readers be praying for you guys over the next few months?

[MA] That we would not lose focus of Gods purpose for us. As we continue to pursue music in the industry, that we would constantly fix our eyes on the Lord. Thank you for the prayers!

[JW] Thanks for talking to us today guys, any final comments?

[MA] Thank you so much for having us!

Mass Anthem’s new single Through People Like Me is going to radio very soon, keep an ear (or two!) open for that. The lyric video can be checked out below.

Buy Through People Like Me
iTunes | Amazon | Google Play