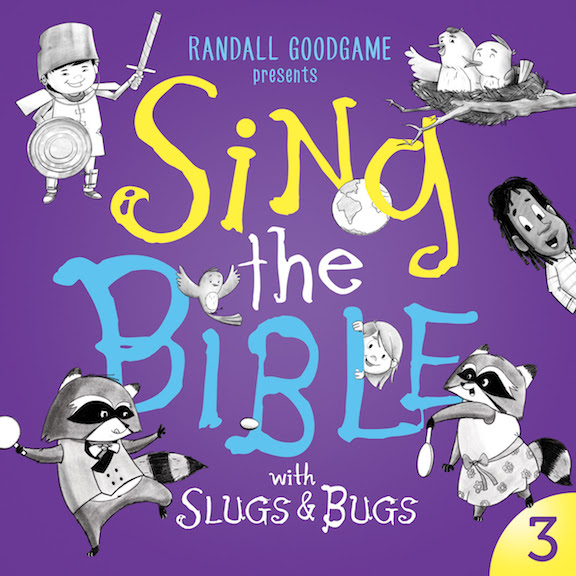 The seventh installment in Goodgame’s Dove Award-nominated Slugs & Bugs series and the fourth Sing the Bible recording, the project showcases 16 tracks comprising original music compositions and spoken character vignettes. Highlights include toe-tappers “Get Up!” (feat. Propaganda) and “The Beatitudes”; “I Am The Way,” with lead vocals from Big Daddy Weave’s Mike Weaver; the inspirational ballad “Living Water”; and “Not By Bread Alone,” a Matthew 4:4 chorus featuring the multi-layered harmonies of MercyMe’s Bart Millard. (Photo l-r: Goodgame, Propaganda and producer Ben Shive)

In addition to music, Sing the Bible Volume 3 welcomes back a Slugs & Bugs fan favorite—Chauncy Raccoon, voiced by Andrew Peterson. Along with his friends Mortimer Raccoon (Bart Millard) and “hard-nosed reporter” Sally Lloyd-Jones, Chauncy teaches the importance of being a humble giver (Matthew 6:2-4) through the adventures of the “Society Of Extraordinary Raccoon Society.”

“The lyrics on Sing the Bible Volume 3 come straight from Scripture, and focus on the life, words, and work of our Lord Jesus, the Savior of the world,” explains Goodgame. “Eleven of the songs draw from His spoken words, while the other verses point to His love, His lordship, and how we live in Him. He is the Vine, we are the branches! Let us be transformed by His purpose. I pray these verses take root in all of us as they point to the nourishment that only the Holy Spirit can provide.”

A singer and sought-after songwriter, CCMMagazine.com hails Randall Goodgame as “…the greatest thing to happen to children’s music in a generation.” His Slugs & Bugs brand was birthed in 2007 with the debut of Slugs & Bugs & Lullabies, a collaboration with award-winning singer/songwriter Andrew Peterson. Goodgame now solely helms the Dove Award-nominated series, which continues to receive rave reviews from parents around the world. Among other projects, the Slugs & Bugs line includes four Sing the Bible word-for-word Scripture recordings and two beloved Christmas releases. Goodgame’s popular Slugs & Bugs LIVE concert for families makes numerous tour stops across the U.S. and internationally each year.