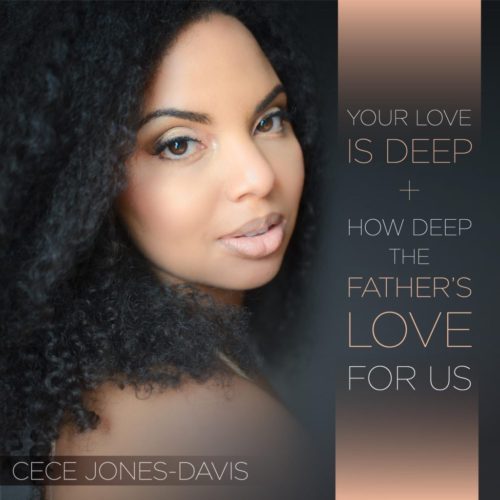 February is the month of love and Worship Leader Cece Jones-Davis wants to remind believers of the creator of love. The worship leader and graduate of Yale University School of Divinity, Yale Institute of Sacred Music, Worship and the Arts, Princeton’s Black Theology Leadership Institute and Howard University is expressing her passion for the Lord through a brand new release. The single is a medley of two ballads and heartfelt tunes sung to the Savior: “Your Love Is Deep” and “How Deep Is The Father’s Love For Us”. The medley is currently available on iTunes, Amazon and other digital music retailers.

On February 14th, the day set aside for love, Cece celebrates with the melodic and pretty, “Your Love Is Deep”, a song about the height and depth of God. For years the songstress had been singing it during her private worship time but decided to record the song once she met the CCM songwriter, Jamie Smith. “I have loved the song for a long time, primarily because it’s simple and conveys the bottom line – the enormity of God’s love for us,” says the artist. “How Deep Is The Father’s Love For Us” is another memorable track which seamlessly follows “Your Love”. It’s a contemporary hymn, beautifully arranged and exquisitely delivered.

Known as a worship leader, speaker and advocate, Cece Jones-Davis is passionate about God and helping His people. As a bridge between Caucasian and African-American worshippers, she’s been consulting and leading worship at multicultural churches and addressing social issues including racial reconciliation. As an entrepreneur, she is the founder of a non-profit organization called Sing For Change, Inc. which assists those affected by HIV/AIDS.  Formerly a Washington, D.C. resident, Cece has been a featured soloist on such projects as Stephen Hurd’s In the Overflow: Vol II and Times of Refreshing, as well as Grace Covenant Worship’s Christmas album. She released her debut single, Dreams, in 2016, in support of a sorority sister who passed away from Synovial Sarcoma, a rare cancer, in 2014. In addition, she’s known as a blogger for sites like the Huffington Post and Essence.com. She lives in Oklahoma City with her two children, Halo and Honor and her husband, Mike, who is a physical therapist for the NBA. For more information about Cece Jones-Davis, log on to www.cecejonesdavis.com.  Connect with her on Facebook and Twitter.