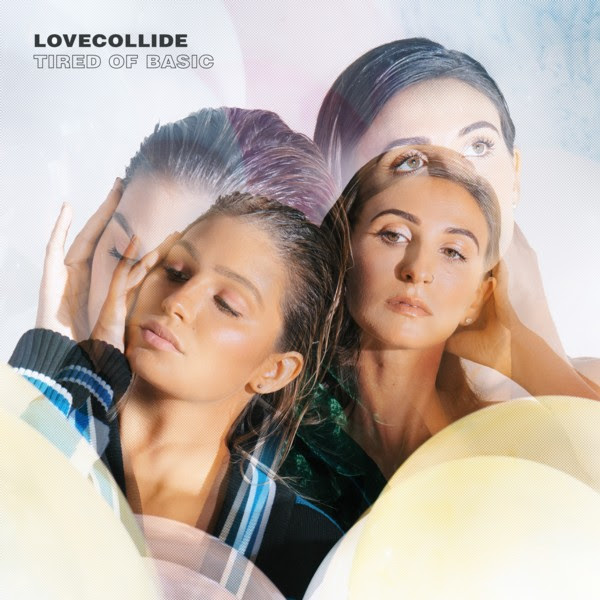 Lauren Budnick and Brooke DeLeary of the faith-forward pop duo LOVECOLLIDE announce their third full-length album, Tired Of Basic, which is set to independently release April 13 on ABS Entertainment, LLC with global distribution for the first time through The Fuel Music.

Having spent their young lives working to buck trends, sisters Lauren and Brooke intentionally defy cultural norms with an “all-in,” risky faith that has led to cameo appearances in the film God’s Not Dead 2, a Nashville TV series trailer, a Hayley Orrantia music video and more, as well as sparked tours coast-to-coast and events with some of Christian music’s best-known artists.

With Tired Of Basic, the girls continue to shatter expectations, recording a soundtrack that is meant to be a revolution against boredom, mediocrity and status quo living.

“That’s the theme, that’s the mission–an extraordinary life,” states Brooke. “Living in a way where you can never be labeled, like Jesus. Starting revival by being the light, being different, showing who Jesus is through us.”

Sonically, Tired of Basic finds LOVECOLLIDE experimenting with cutting edge pop sounds courtesy of producers Riley Friesen (Family Force 5, Group 1 Crew) and Matt Dally (Superchick, Jamie Grace), while the lyrics have emerged from a season filled with doubt, loss, depression and uncertainty. LOVECOLLIDE deploys earworm hooks to address topics like being “awake” in Christ, God’s relentless pursuit of humanity, surrendering dreams to God and trusting Him in the midst of uncertainty, the latter being the theme of the first single from the album, “I Don’t Want It,” which goes for radio adds beginning Jan. 26.

“We want our music to be an experience, not just something to listen to,” says Lauren. “We want the vibe, the style we give people and the love they receive to be something they remember, something that changes them.”

In addition to the new music, Lauren formally announces that she has taken a new name following her marriage Jan. 6 to longtime LOVECOLLIDE drummer Adam Budnick. The couple’s engagement and wedding story, along with photos, can be seen at The Knot.

Having started a band together when they were just tweens, Nashville-based LOVECOLLIDE siblings Brooke and Lauren share a passion for revival and extraordinary, bold living for Jesus. The duo first hit the Billboard charts in 2016 with the song “Mother of the Son of God” and have garnered two top-20 album nods (2014, 2016) from NewReleaseToday.com. The girls were featured in the hit movie God’s Not Dead 2 leading the song “How Great Thou Art” and in Hayley Orrantia’s music video “Strong, Sweet and Southern” while Lauren was in aNashville TV series film trailer. Together they have also shared stages with Natalie Grant, Sidewalk Prophets, Unspoken and others.

Touring nationally with Lauren and Brooke co-leading vocals, guitar and bass and with Adam on drums, LOVECOLLIDE has brought their vertical driven concerts to such diverse venues as college campuses, churches, schools, retreats, conferences, camps and major Christian festivals. They have also toured throughout Canada, something that’s particularly meaningful for the girls as tribal members of the Chippewas of the Thames First Nation in Muncey, Ontario.

Source: The Fuel Music and Management