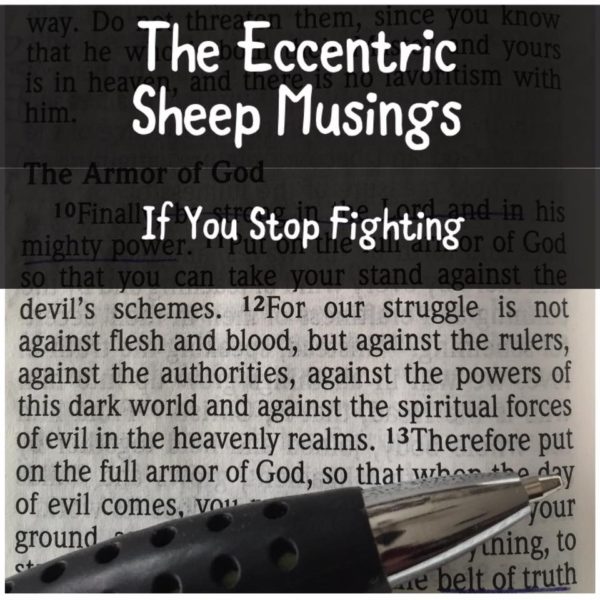 The Eccentric Sheep Musings: If You Stop Fighting

“8 Be alert and of sober mind. Your enemy the devil prowls around like a roaring lion looking for someone to devour.” 1 Peter 5:8

If you stop fighting…YOU. WILL. LOSE.

Right now you are in a fight.  It’s a matter of life and death.  It’s a matter of where your soul will spend eternity.  This fight means EVERYTHING.  You’ve got a tough opponent.  They are one of the roughest and toughest in all the heavens and the earth.  They are scheming and crafty.  They won’t give up, and they will do anything to win.

What is this fight?  For all of us Christians, this is the spiritual fight we face every day.  We fight Satan day in and day out every day we breathe on this earth.  Until we breathe our last, we have our fists up against Satan until our father in heaven finally calls us home.

If I stop fighting against self harm urges, I will relapse, and I will lose.

If I stop fighting depression and let it win, I will give up, and I will lose.

If I stop fighting those suicidal thoughts and let them in, I will believe them

AND YOU WILL LOSE.

If you stop fighting….YOU. WILL. LOSE.

It might seem harsh to say someone lost the fight instead of they stopped fighting, but these wars we battle in every day are a serious matter of life and death.  Addiction and mental illness are tough battles.  If you stop fighting and instead allow the illnesses and afflictions to win…you will lose.  Satan wants to take you down at any cost.  He’s waiting for you to get weak so he can take advantage of you and take you to the ground.

How can we fight this fight alone?  It’s like a championship match where we have to endure more rounds than a non-championship fight.  The time spent in the ring is long, and we grow weary with each round that passes.  How can we win, much less just endure to the final round?  How can we do this alone?

Before you went in the ring with Satan, God faced off against him.  They didn’t fight for a championship belt…they fought for your soul!!

You know what happened?  God won!  Victory by a knockout punch in the first round!  Satan didn’t stand a chance!

Because God took the victory, he came over to the scoreboard before you ever stepped foot in the ring.  He marked on your side the winning points for a decision victory.  YOU ALREADY HAVE THE POINTS TO WIN THIS FIGHT!  God did that for you because He won before you.

So…if you already have the winning points to beat Satan in the ring…all you have to do is keep fighting.  If you stay in the fight, YOU WIN by decision.

But, if you stop fighting….Satan will keep going, and you will lose.

Remember that as you wake up to the day and another round in the ring with Satan and all the addictions and diseases we build up along the way. It’s a tough fight and an even tougher opponent.  You’ve already got the points to win though.  Just stay in and keep fighting and YOU’LL WIN THIS.