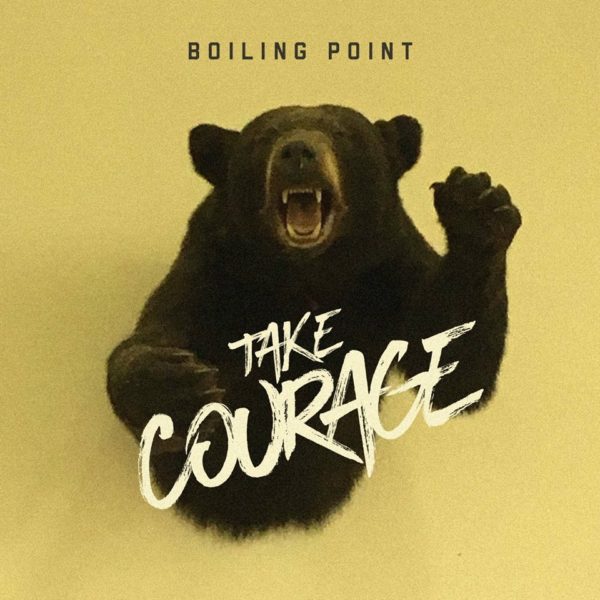 After their 2015 album More, Boiling Point are back with their brand new EP Take Courage. The latin roots of the word Courage (Cor) reveal that “Take Courage” more or less means “Take Heart.” As the band explains, “Often times, the things that give us courage, or heart, are equally the things than can take it from you — so the phrase “Take Courage” can be taken to have both positive and negative connotations.”

The EP acts as a concept album as it explores both of those connotations. Boiling Point goes on to further explain, “The EP explores themes like faith and its dance with doubt, how heroes have a way of lifting you up, but can also let you down more than most, and how relationships can be some of your best times and some of your worst times.”

Take Courage bursts out of the gate with the effervescent opening track “In It To Win It.” A stereotypical rock pump up song, it gets underneath your skin within the first 45 seconds and carries you effortlessly through to the end of the track with no lapses in momentum.

“Won’t Let Go” doesn’t let go of the momentum but does take its foot off the accelerator a bit, settling us into the EP as it does so. Here we start to notice the confidence of Eric’s clear yet raspy vocals and the calm authoritive nature of Jon’s drumming. The song falls and rises beautifully to hammer home its message that God “won’t let go” of us.

Reflective piano tones introduce us to the quiet section of the EP and “Run.” A song all about chasing after the earth’s pleasures to fill the empty void in all of us, Run will still have your toes-a-tappin’. While introspective, the song feels upbeat, a tricky feat pulled off well.

“Once Again” will have crowds swaying from side to side clicking along as they cry out to God in worship. The poignant chorus of “Once again, tell me who I am, when I can’t reach the mark, my best attempt it has no defense, still I have Your heart” hits home hard.

Some unexpected distorted synths kick “To The End” off to warm us up for the end of the EP. Mainly aimed at couples, “To The End” is a song about how couples will love each other ‘to the end’ of time no matter what the world throws at us. The references to the “oceans we sail through,” the “storms that surround us” and the “world crashing down on us” all feel a bit cliched but the song’s pulled off well and doesn’t feel forced. There’s enough encouragement here too for the single folk.

Take Courage is rounded off by the rocking Foo Fighters cover “My Hero.” The drums hit that bit harder, the guitars buzz that bit louder and the vocals cut through the music with a bit of a sharper edge. Triumphant in nature, “My Hero” is a fitting way to round out the EP.

Boiling Point are a band at the top of their game and one listen through to this EP will have you questioning why they aren’t towards the top of the Christian music pile. The band’s hearts and music are as solid as they come, and yet they keep floating under everyone’s radar. Hopefully this is the EP that people ‘Take Courage’ in gambling on and takes the band to the next level. They’ve got the talent, no question.

Take Courage is a wonderfully constructed art piece and must be considered as one of the top Christian releases of 2017.